The investment HAD to be made, couldnt resist - out a couple of hours ago on my new Kruiser wing for the very first time, a short session.

Not marginal wind, 7 knots, but 30 degree offshore so I rode up to the next bay where a bit onshore/sideshore at least, but as it was even more offshore further up, the wind was not clean.

Even in this less efficient wind with a strutless 12 m2 LEI on 30 m lines, I went easily 90 degrees when going upwind, amazing.
It must be able to blast upwind at incredible angles in better wind

Feels so smooth and clean and stable, and could even make flying 360s, so of course not close to a wave wing, but it can turn just fine, surprised by this 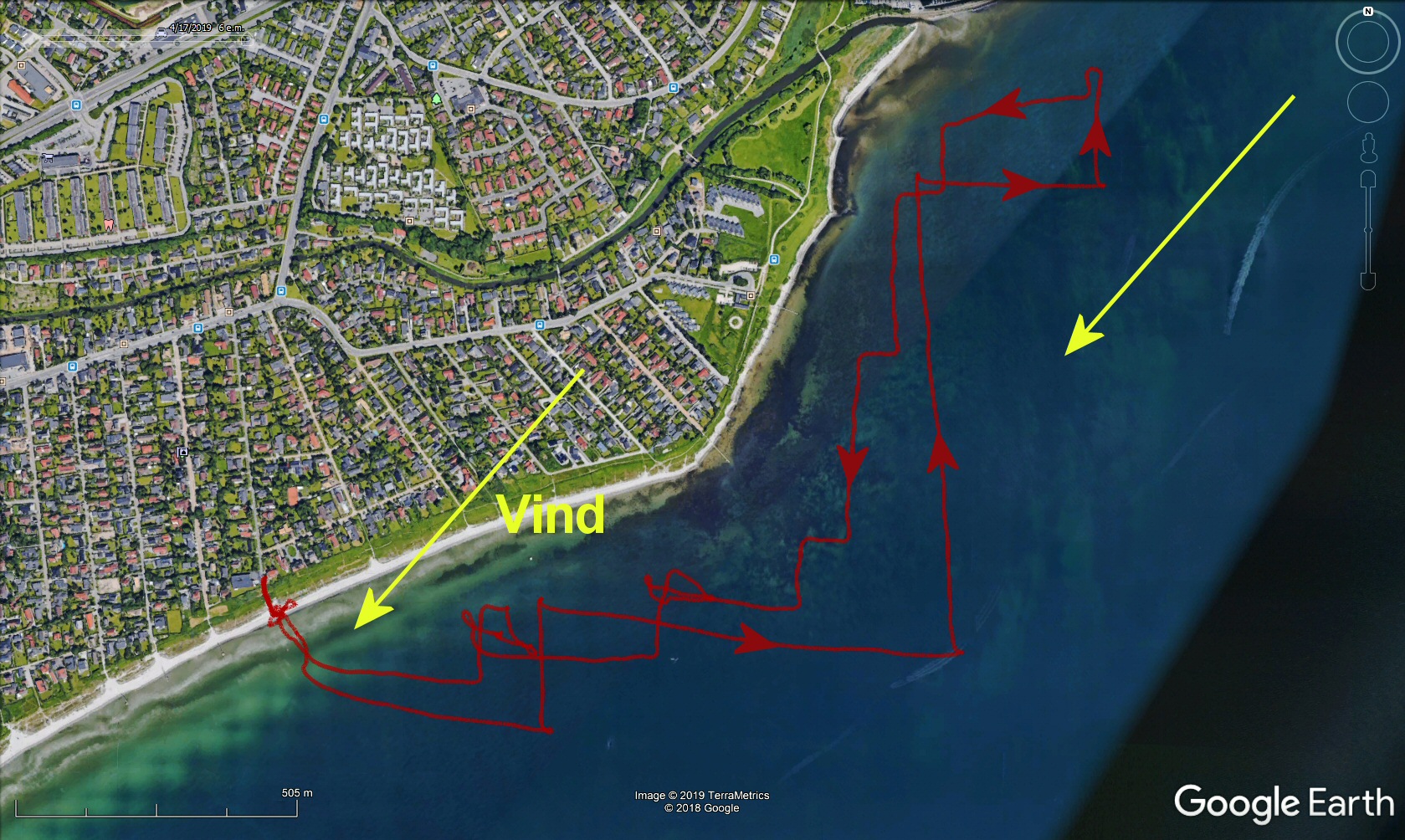 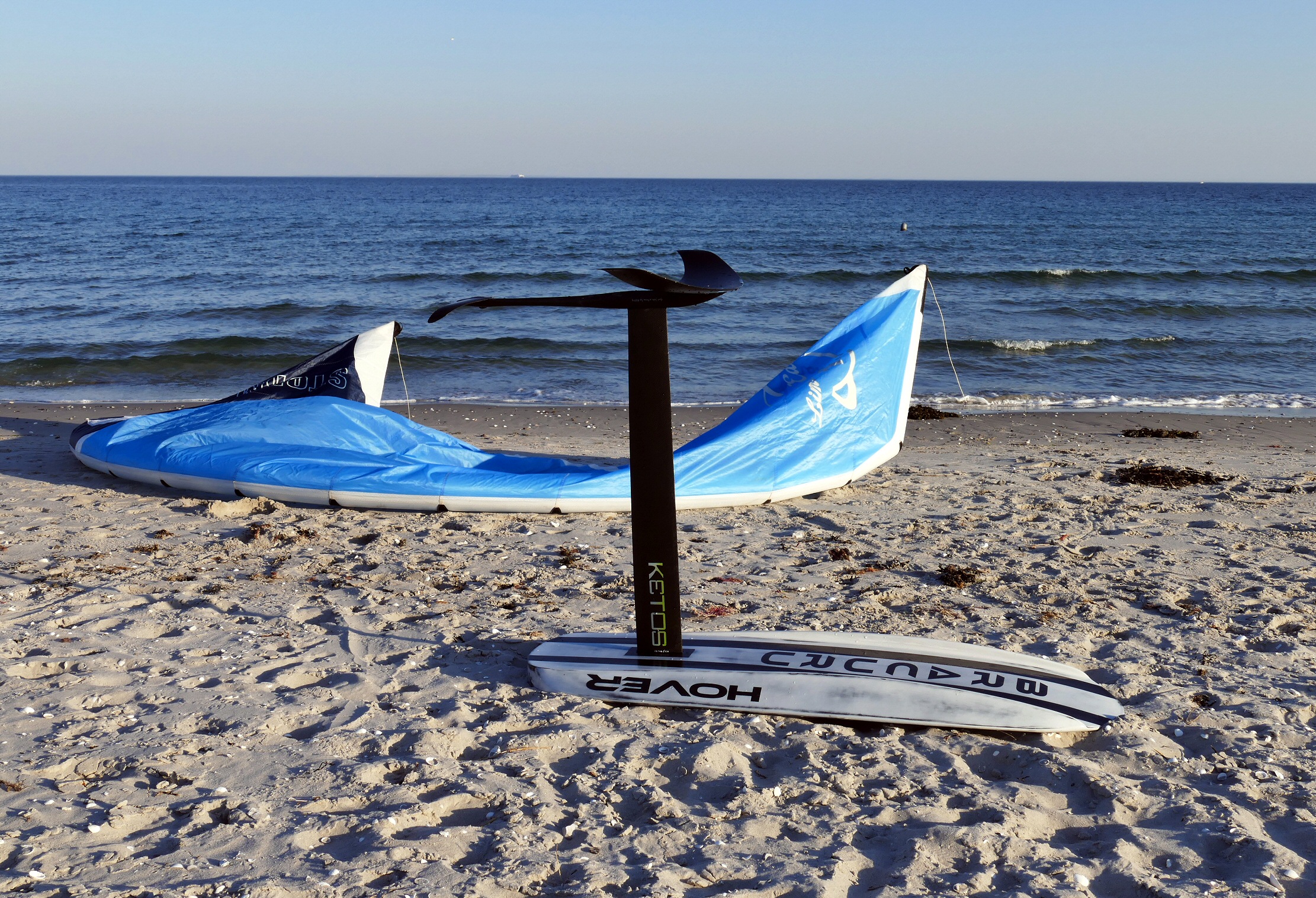 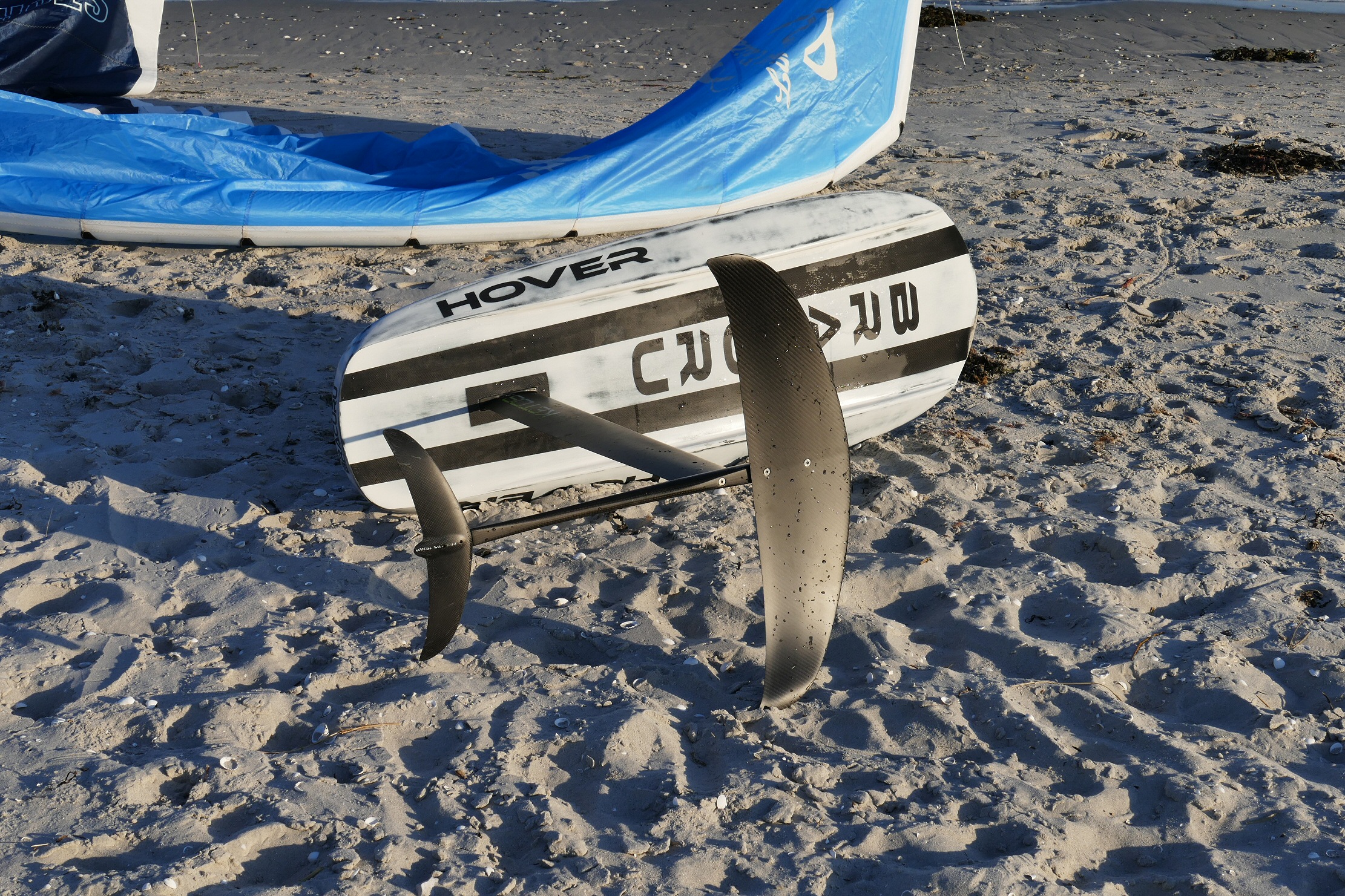 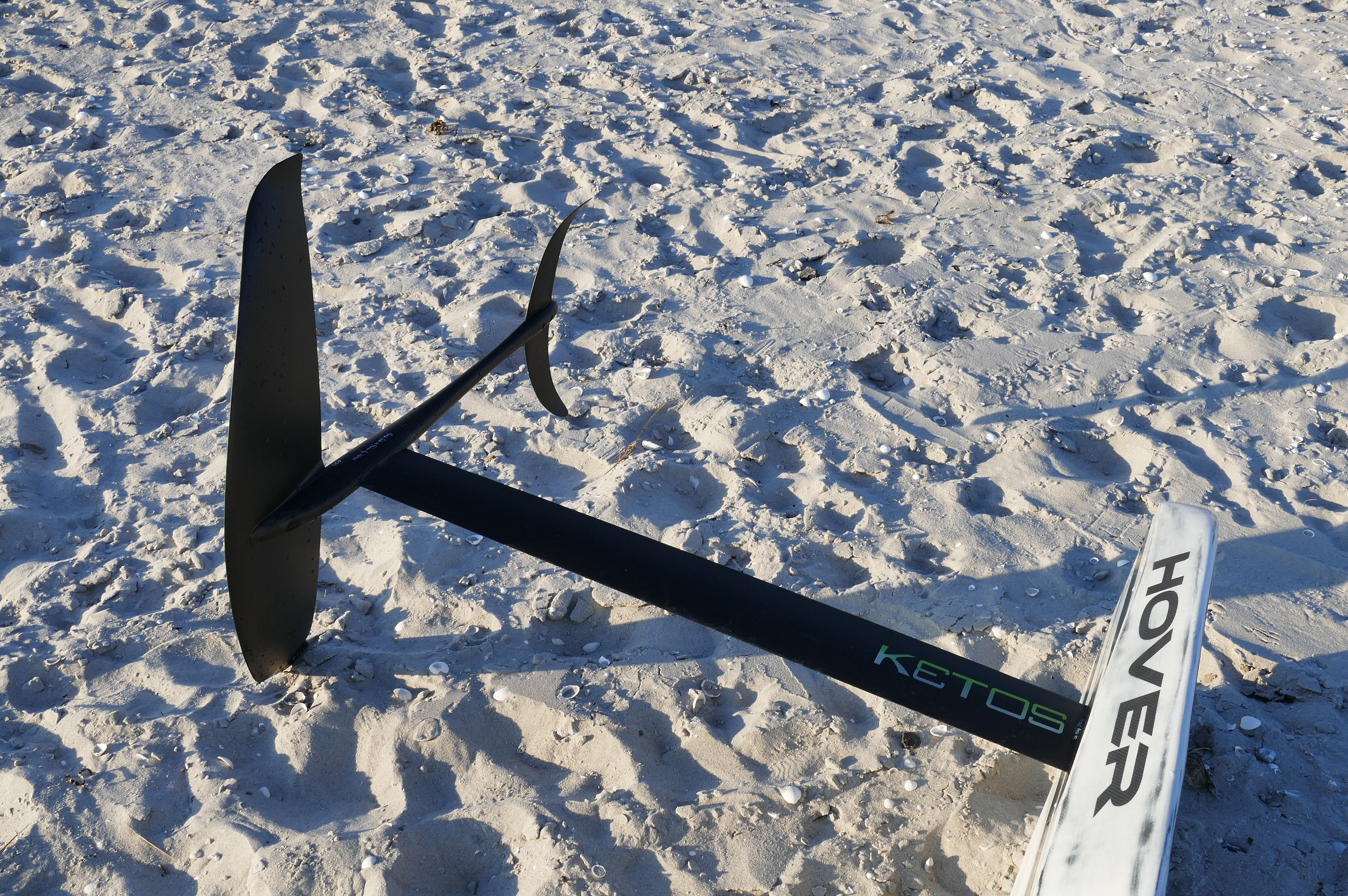 Soooo much better than a superlow AR huge wave/surfwing, in this wind, loving it on first ride

Peter_Frank wrote: The investment HAD to be made, couldnt resist -

I know that feeling! What a beautiful wing.

I wonder what Stabilo you are using? Also what do you think the minimum take of speed is as well as average speed you are riding?
Last edited by jakemoore on Thu Apr 18, 2019 2:55 am, edited 1 time in total.
Top

What do you think the aspect ratio is? Thanks
Top

I did not notice the speed when out, but have checked it now, set as doppler speeds (where you have no peak errors).

Got absolutely no idea of how fast it can go, did not try to go fast at any time.

Going downwind I went as deep as possible instead, meaning slow.
A bit difficult in this fickle low wind, to keep the kite flying if really deep.

Minimum take off speed?
How does one ever know, analyzing an sbp track afterwards...
Should have looked at the watch when out, but did not, as starting speed can be manipulated in so many ways with the kite, I dont really care

Was using an S (small) stabilo, no reason to go bigger as really stable in this constellation and less drag turns better

Might be even better if even higher AR, but then it would not turn so well, so for me a good balance.

And yes, I think it is beautiful too, an aesthetic masterpiece, maybe that is one of the reasons I was not in doubt when I saw it, a beauty, high AR and more area (1100 cm2), exactly my liking in marginal winds or for getting around using a small kite and going a lot higher angles than on wave/surf wings

Polar of this first short session in 7 knots with a tube kite: 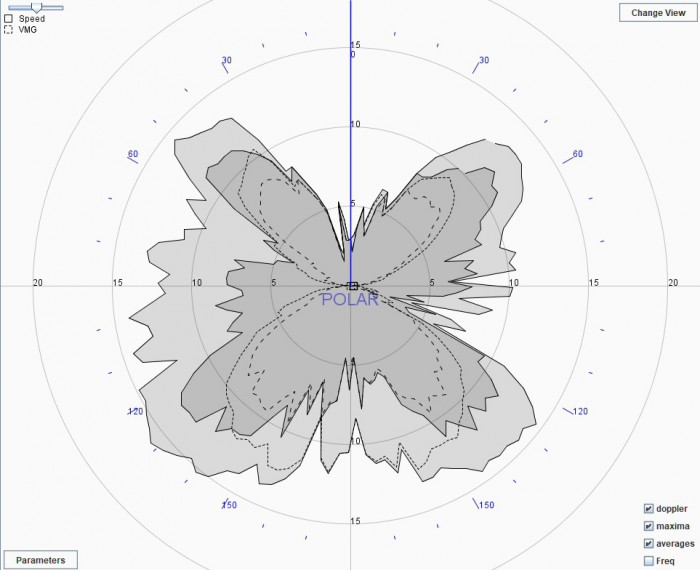 Nice polar and review, many thanks ;

Do you think it is agile enough to go in the waves ? I use the surf 1200 cm2 for both waves and light wind (about 4-5 knots) but like you, as soon as I have 5-6 knots I prefer my large freeride wing (850 cm2) ; so maybe this one would be a better choice if it is stil compatible with waves (less frequent but I want to keep a suitable configuration for this pleasant rare waves) ; Do you plan to test with the Pulsion 15m ?
Top

Regis, I dont really know why you would want to use it in waves?

Can not say how it would work, as then I have to use it on a small board with a small kite, not very likely when you got perfect wave wings for that, either medium sized or surf wings.

Today, same gear but more wind, so after a small hour I changed to a Surfwing and a 10 m2 kite instead.

So YES, it matters

Because i do not want to have both 1200 and 1100 in my quiver (financial, dooblon), and I need a low-speed wing for the wave which is currently the 1200 in my quiver. If i swap my 1200 to 1100 ligjtwind kruiser ( for better comfort/efficiency in marginal winds rather than lower my low-end in marginal wind which I do not believe will happen with the 1100) , then i want to still have fun in waves (i.e with the 1100 since my other wings are too rapid) when we have waves here.
Top

Aaaah, okay Regis, so you are not in waves that often, and dont want two wings, get it.

I will try to switch wings next time out on my 1200 Surf wing (quite often), to see how much slower turning the Kruiser will be, and feel

Saw it today, was impressed.
Looks like another Ketos R and D winner.

Have been out some more days now, easter holidays and perfect weather

Upwind angles around 110 degree for the Kruiser, and just over 70 for the wave/surf wing.
Wind direction changed between the two sessions.

Also, had to swim ashore in a lull where I failed, bugger.... 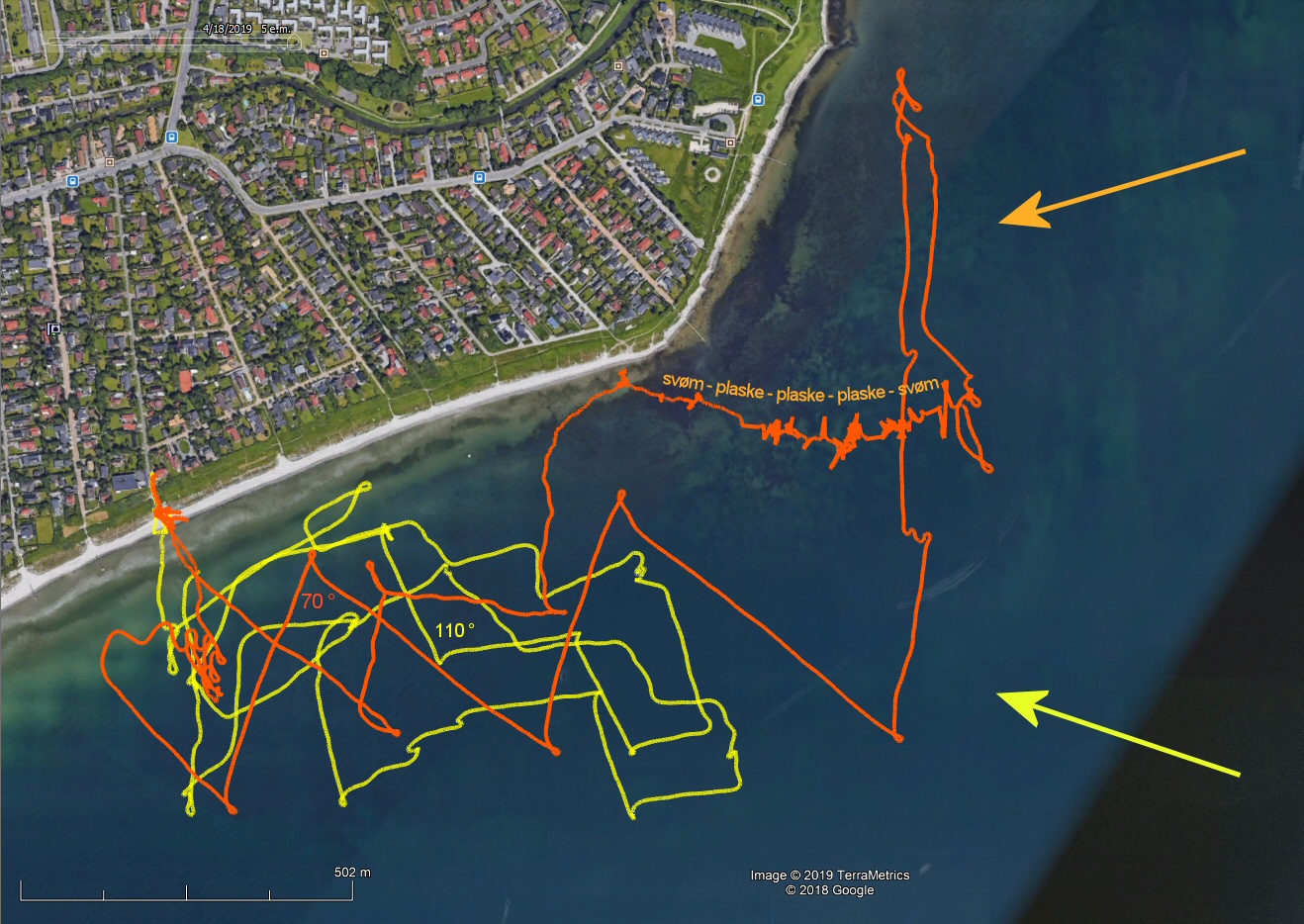 2 days ago it was FINALLY light wind, yes, have been waiting for this

With a 15 m2 ConceptAir Pulsion I could ride in 5 knots with the Kruiser wing (@78 kg), good upwind angles for this wind.

Apparently I could just ride when 4 knots, but I could not waterstart, can not get my ass out of the water in this wind, so there is my lower limit 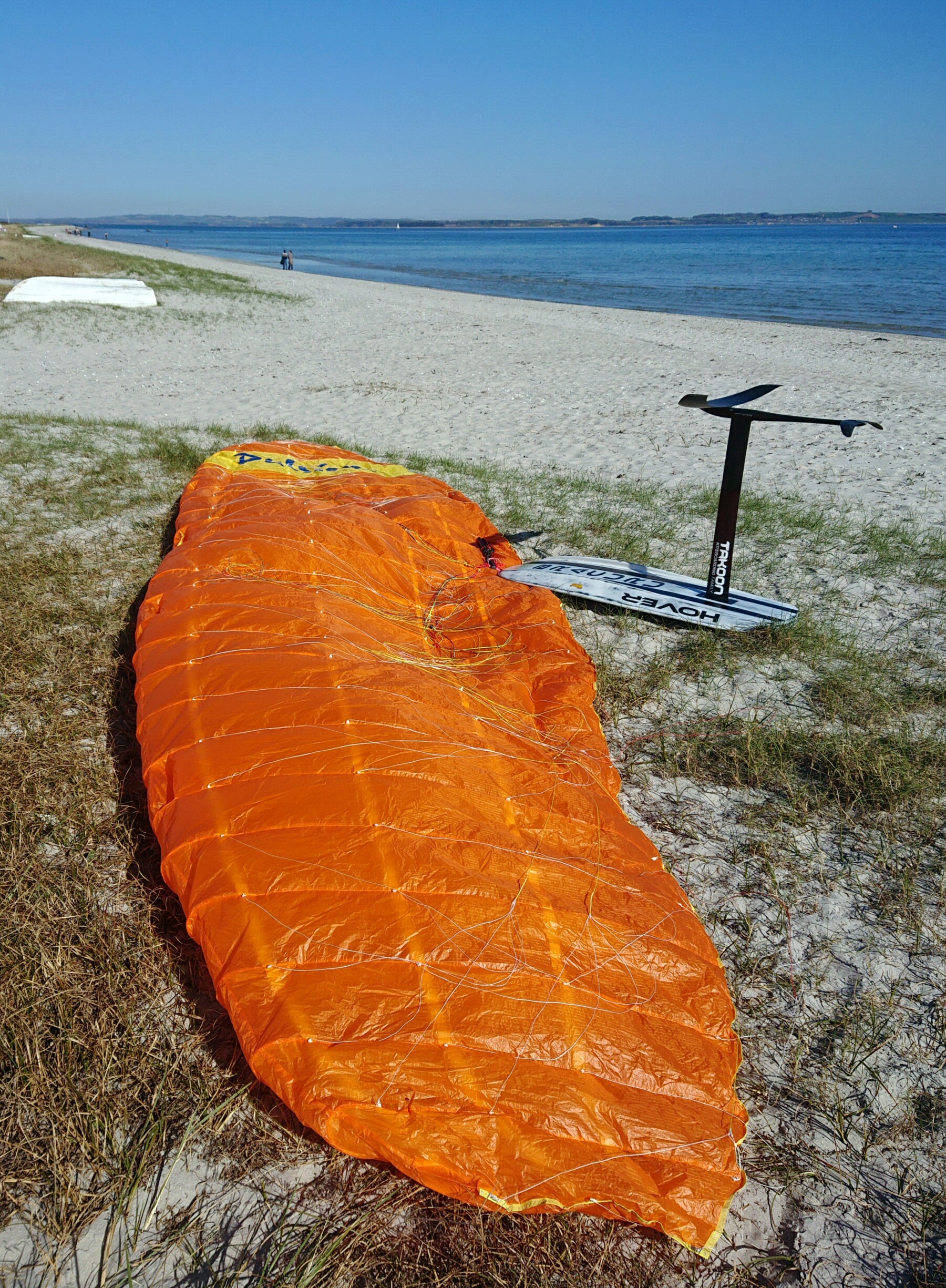 Today it was windy, around 9 knots I think, so took a wavefoil with the 1200 cm2 surf wing, and a 9 m2 wavekite, and rode for a couple of hours, an almost perfect day for me

Then I could feel the wind slooowly beginning to drop, so I went in and changed to the Kruiser wing instead, to check Regis's request - can it turn, can it be used in waves?

Bugger, I did not expect that - it turns just dandy when carving narrow back and fourth, like you do in waves (no waves today only knee/thigh high).

Of course one can not wiggle as fast side to side going straight, but that might just happen because I went from an XS stab to an Small upswept stab also, when changing "flyer".

Must say the way it turned so easy was NOT what I was expecting, and almost feel like I want to use this wing overall now ha haa

Making flying 360s was also just as easy on the Kruiser

Took a few pics after the sessions today. 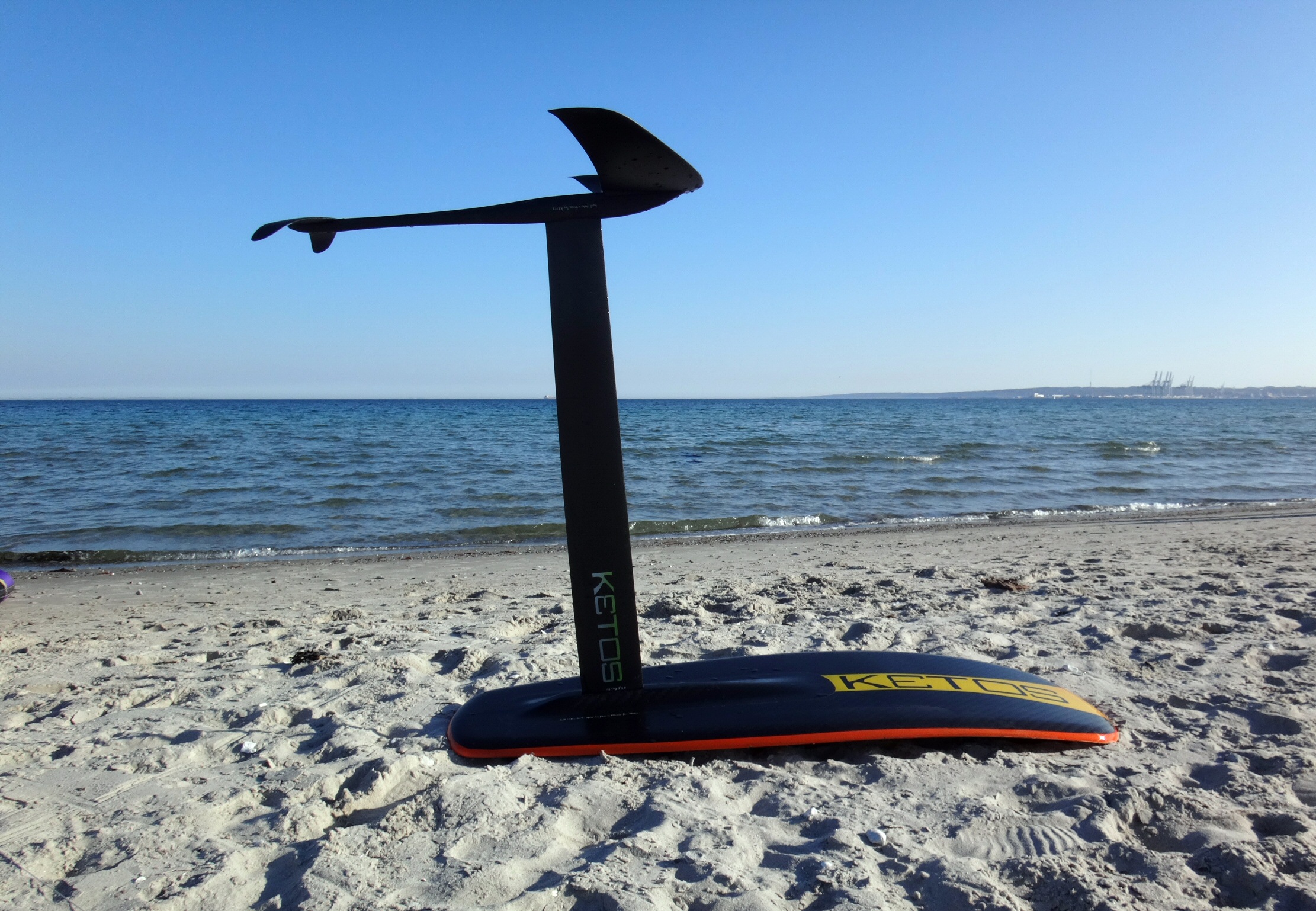 Soooo beautiful to ride on the sandbanks today, here carving tight with the Kruiser - testing it up against the Surf wing: 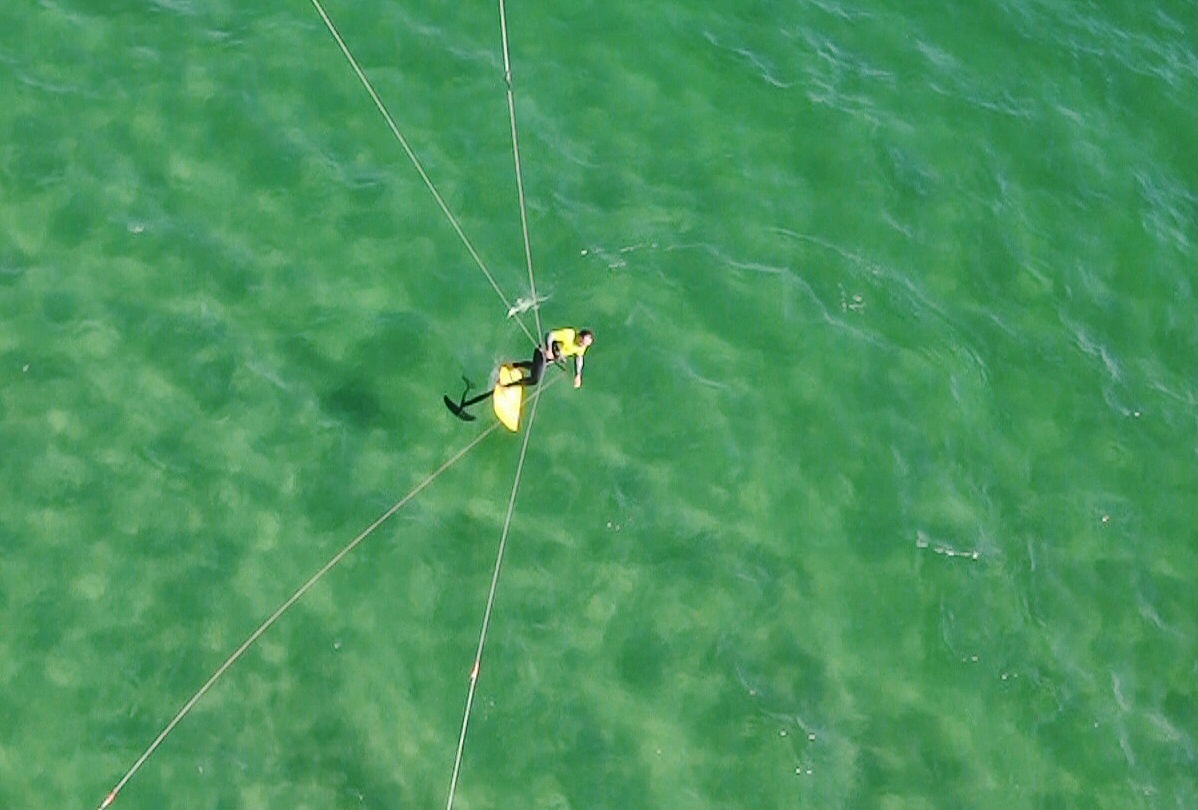 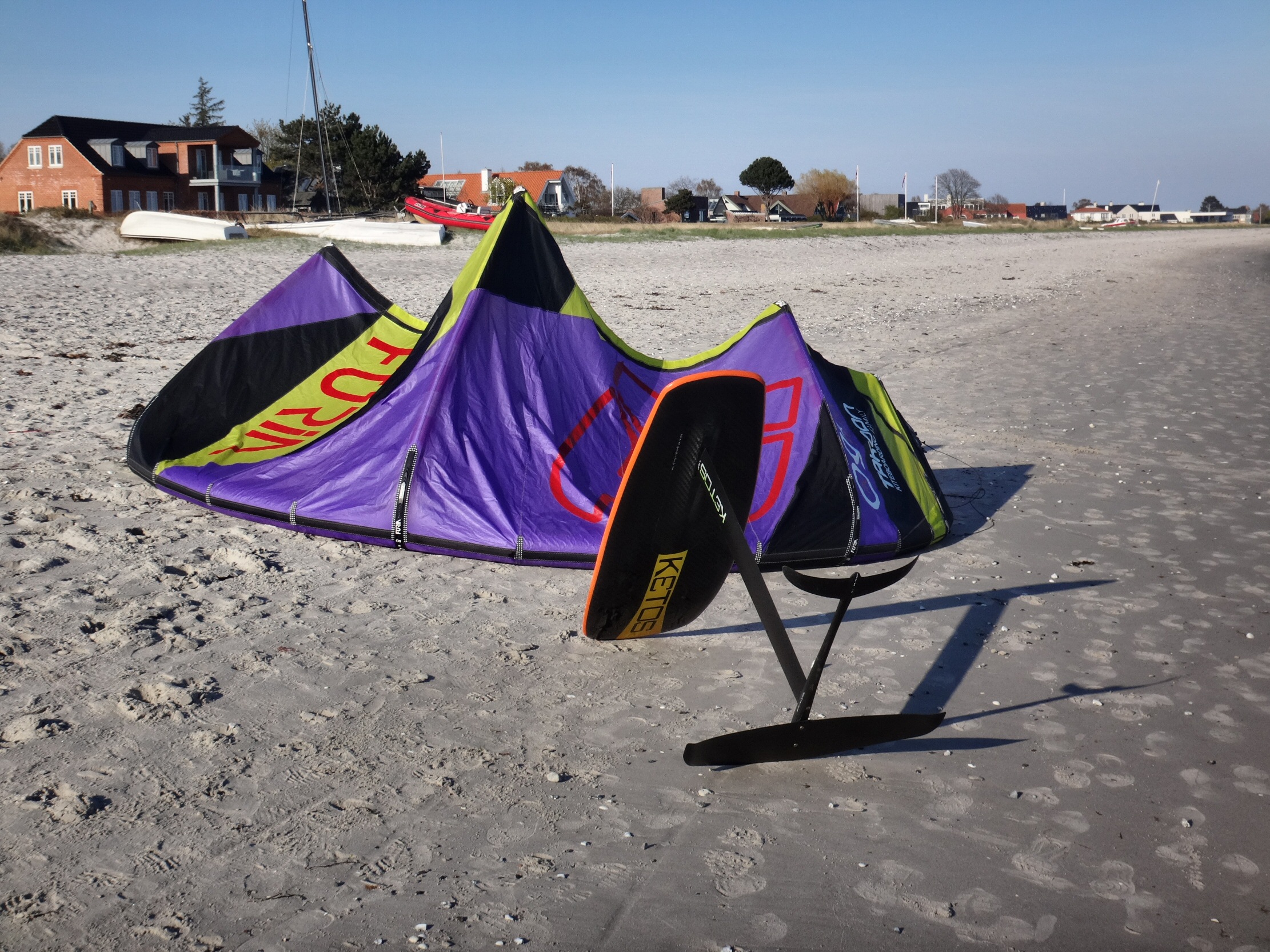 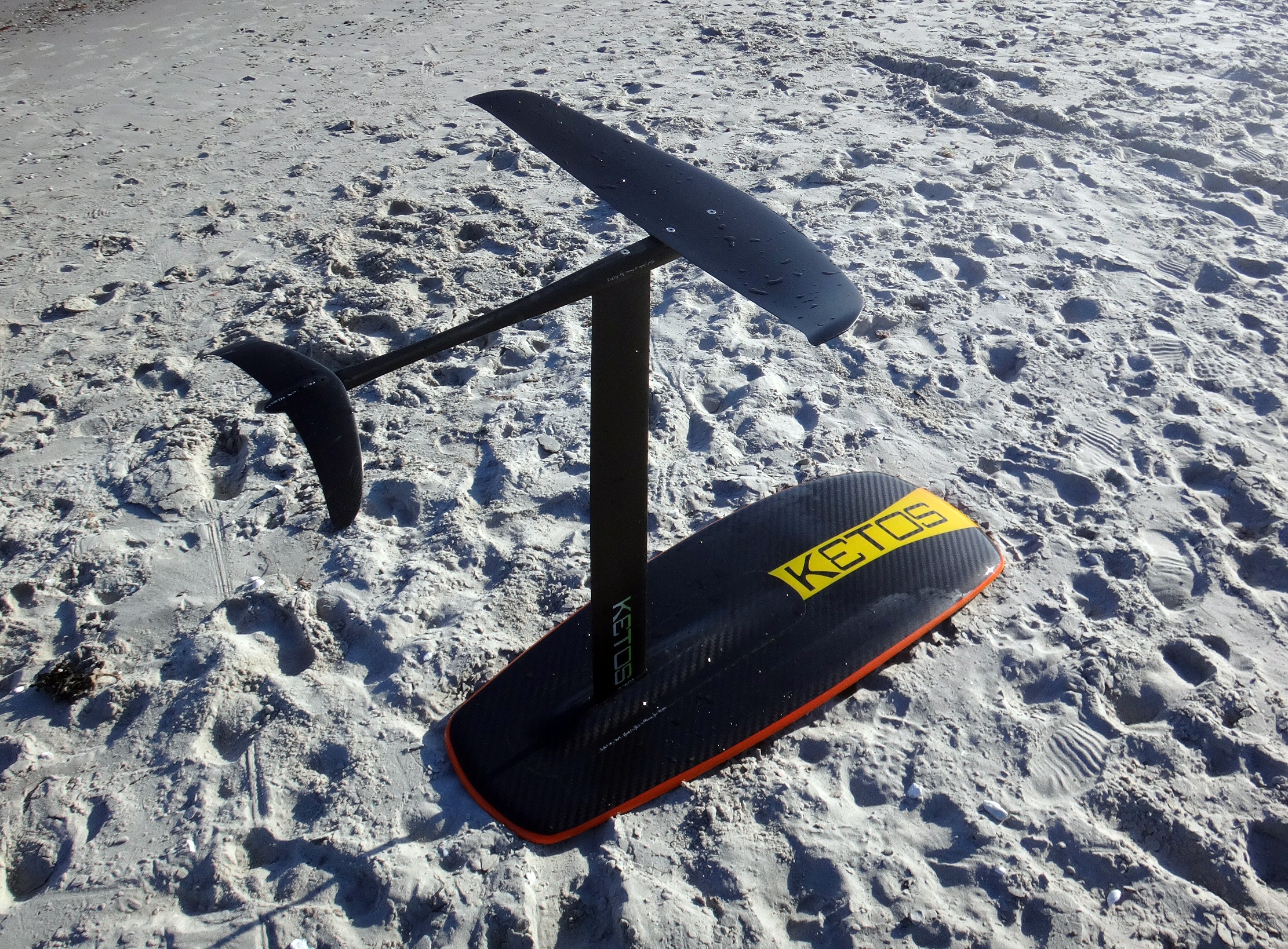 Hope some can use these findings