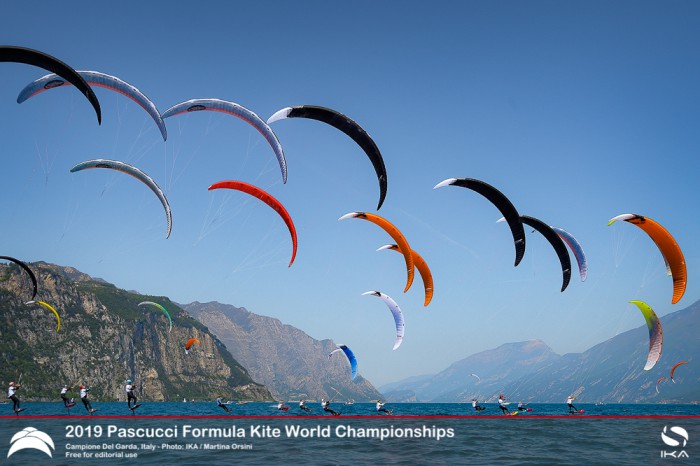 Reigning kitefoil title holders France’s Nico Parlier and the US’s Daniela Moroz got the defence of their crowns off to a perfect start in stellar conditions at the Pascucci Formula Kite World Championships played out on the splendour of northern Italy’s Lake Garda.

Both dominated their respective fleets, with a delighted Parlier taking all four of his races, while Moroz left the other women in the fleet of 30 trailing far in her wake on the trapezoid course in 10kts to 12kts of breeze.

The opening exchanges of the 2019 edition of the International Kiteboarding Association (IKA) Formula Kite Worlds were fought out by the athletes in the largest and fastest foiling fleet ever assembled.
The championship battles to be disputed over four days of high-octane action off Campione del Garda have drawn 87 men and 30 women from 29 nations, many spurred by the prospect of kitefoil racing making its debut at the 2024 Olympic Games in Paris.

With such a large men’s fleet, it was divided into three seeded flights for the first of the two-day qualification series. The top of the order will ultimately fight for the crown in the closing finals’ series, while the women race in their own separate series.

Britons Olly Bridge and Connor Bainbridge, racing in the same “red” flight, had a good day on the water with each taking two bullets and two seconds to leave them second and third respectively in the overall rankings.

Equally, France’s Théo de Ramecourt opened his account racing in the “blue” flight with a pair of bullets that helped propel him to fourth spot overall. He had found himself up against former world champion Maxime Nocher (MON) and the pacy Denis Taradin (RUS).

Nocher, racing in the thermal mountain breeze that kicked-in like clockwork in early afternoon, picked up a bullet himself and sits in a comfortable fifth place overall after the total of 15 races run back-to-back at a dizzying pace.

Most of the racers quickly figured that the right of the track on the first upwind leg under the spectacular cliffs afforded a “lift” and better pressure in the slightly shifty conditions that provided scintillating foiling conditions for the athletes’ 18m and 21m kites. 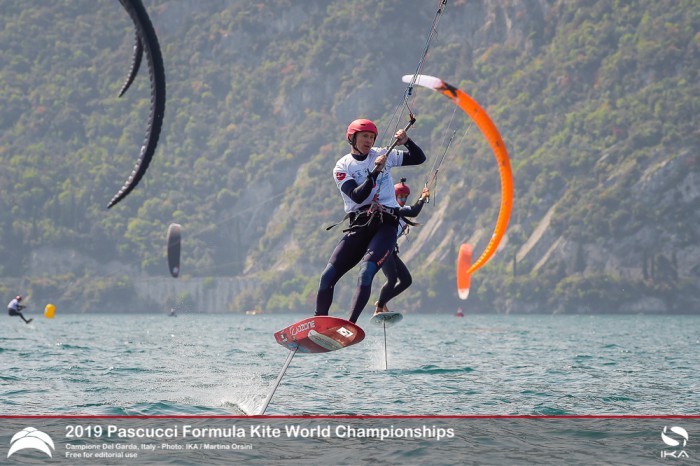 Perhaps one of the day’s biggest surprises was French novice Benoit Gomez capturing the sixth spot overall, competing in the same “blue” flight as Parlier. Gomez, who cut his competition teeth in the Twin-Tip: Racing discipline, racked up two seconds and two fourths.

But it was two-time defending world champion Parlier who put down a marker showing he will be the one asking all the questions of the young pretenders to his crown, with his superior pace and tactical nous very much on display.

“The wind was pretty light—a nice thermal breeze,” said Parlier. “But it’s a super-interesting wind. It spreads the course very wide. You just had to go to the cliff—very interesting. I won the four races in my fleet, so it couldn’t be better. I’m very happy.”

Moroz was similarly pleased with her outing in the women’s three races, adopting the same strategy as Parlier in seeking the better pressure under the cliff, while gybing early to go inside on the downwind legs, on the track’s left.

“It was super nice out there,” said Moroz. “I was on my 18m kite feeling well powered, but downwind was really nice. So it’s a good start for me and I’m feeling pretty happy.”