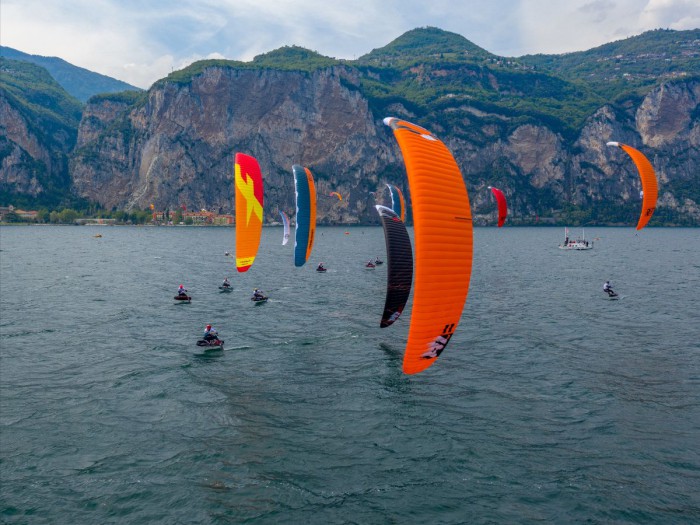 But the pair edged out France’s Alexia Fancelli and former world champion Maxime Nocher by just one point in a day of thrillingly close race action on northern Italy’s breath-taking Lago di Garda on the sidelines of the 2019 Pascucci Formula Kite World Championships.

With all the world’s fastest kiteboarders gathered to contest the world championships—hosted by Campione Univela and supported by Regione Lombardia—most who could muster a mixed team joined the trial for which one day was set aside.

The crop of former world champions teamed with their fellow countrymen added to the drama and intensity of the nail-biting format, with Russia’s Elena Kalinina and highly-ranked Denis Taradin taking the third place overall.

In the case of Britain’s multiple former world champion Steph Bridge, she teamed up with middle son Guy, the current European Formula Kite champion. Despite their top-notch pedigree, they could only place seventh.

The novel round-robin format involves the man and the woman racing one lap each of the track against half the teams, with the added complexity of a “flying” handover when the second team member begins their lap just as the other finishes.

It certainly spiced up the action when stronger team members handed big leads to their weaker partners, or vice versa, only to see them slip back, or charge to the head of the order. The result was a far great shuffling of the order that is common even in kitefoil racing.

The adoption of the unusual mixed team relay format—which will no doubt be refined—was necessary after kiteboarding was allocated only one Olympic medal, coupled with a stipulation that there should be gender parity in the event.
Nonetheless, the prospect of Olympics inclusion spurred national sailing federations to pour unprecedented resources into kiteboarding in the quest for coveted medals.

The 2019 World Championships of Campione del Garda can already boast the biggest foiling fleet ever assembled, with 87 men and 27 women from 29 countries. But many nations like Britain, France, Poland and China also have funded coaches on the water for their many young racers.

Steph Bridge, long a supporter of kiteboarding’s Olympics inclusion, was sold on the mixed relay format even after chilly afternoon on the water when ten near back-to-back races were contested.

“I enjoyed it”, said Bridge. “Of course it’s frustrating if you’re winning and the other person doesn’t do well. But that brings teamwork to the sport, which something new and very welcome.”

Russian Denis Taradin, lucky enough to partner Elena Kalinina, is another convert. “Hands down I’m in love with this new sport”, he said. “It completely changes the dynamic. I’ve long raced with the guys, but to put girls in the mix changes everything. It’s really, really fun.”

Evan Heffernan had the added pressure of teaming Daniela Moroz and crossing the line early to earn a disqualification, squandering the lead she handed him in their first race. But with a discard, the pair were able to claw back the overall win.

“This format’s pretty cool”, he said. “The changeovers were very smooth, though we could do better. And perhaps the races could be a little longer, so that they’re more tactical and enable you to make up for mistakes. But it was fun.”