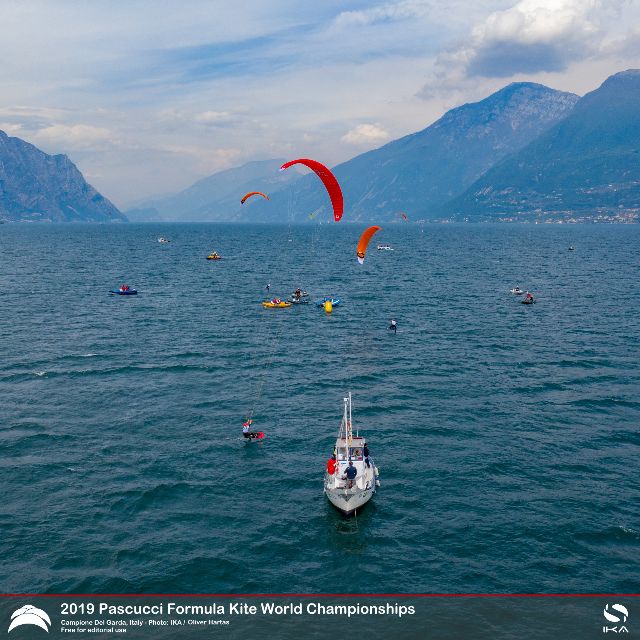 
Dreams of capturing coveted Olympic medals when kitefoil racing makes its debut at the 2024 Games in Paris has prompted nations to invest heavily in kiteboarding programmes to unearth and hone top athletes.

The dynamic of kiteboard racing on display at the 2019 Pascucci KiteFoil World Championships being fought out on northern Italy’s Lago di Garda has altered dramatically since the sailing discipline won Olympics inclusion last year.

Now a number of countries with strong sailing backgrounds and big Olympic ambitions have fielded large national squads, often made up of extremely young athletes who will reach their peak by the time the mixed team kitefoil relay graces Marseilles venue.

But on day three of the world championships off Campione del Garda—supported by Regione Lombardia—rain and thunder showers stopped the reliable Ora thermal winds from building and prevented any racing.

The results of the four races from the opening day’s qualifying series will seed the the 87 men into “gold”, “silver” and “bronze” flights for the final two days of competition to decide the 2019 world champion, while the 30 women will continue their own separate series.

With the French holding three of the top five spots—including reigning and former world champions Nico Parlier and Maxime Nocher—they are well placed to come out on top.

While the world championships are for individual athletes, the French sailing federation (FFV) is looking to the future and has pumped resources into the team, funding two coaches, Ariane Imbert and Antoine Weiss.

“The change is a lot since kiteboarding became an Olympic discipline,” said Weiss. “The money available has multiplied three or four-fold since that decision. Since this year, with the Games inclusion, the federation put us in the Olympic programme.”

Those kind of resources also afford the French team the luxury of having two coach boats on the water at the world championships, allowing Weiss and Imbert to focus more closely on their charges.

The large number of national coach boats on the water off Campione Univela, especially evident as the International Kiteboarding Association (IKA) trialled the mixed team relay kitefoil race format for the first time, is a dramatic illustration of the step-change.

If anything the British team, backed by the British Kitesports’ Association (BKSA) through the governing Royal Yachting Association (RYA), is even better resourced. It boasts two coaches and a physiotherapist at the world championships.

The British have a strong roster of men in Olly and Guy Bridge, and Connor Bainbridge, who are being guided by professional sailor Stevie Morrison. But beyond multiple former world champion Steph Bridge, the ranks of kiteboarding women were thin.

An appeal for women to join the Olympic kitefoil programme drew 130 applicants from diverse sports and disciplines. But coached by Jonnie Hutchcroft, that was whittled down to six, most of them already top-level dinghy sailors.

“The object is to bring the girls up to speed by the end of the year,” said Hutchcroft. “But we want them competitive by September. Basically we feel we will need three teams competing at any point to be successful in the end.”

Britain’s Olympic sailing success pushed the RYA to back kiteboarding in the belief it could replicate the record in kiteboarding.

“Olympic medals are what it’s all about,” said Mark Nicholls, RYA senior manager. “But our goal is also to have the maximum number of people on the water having a good time. There’s no better way to inspire them than by winning Olympic medals.”