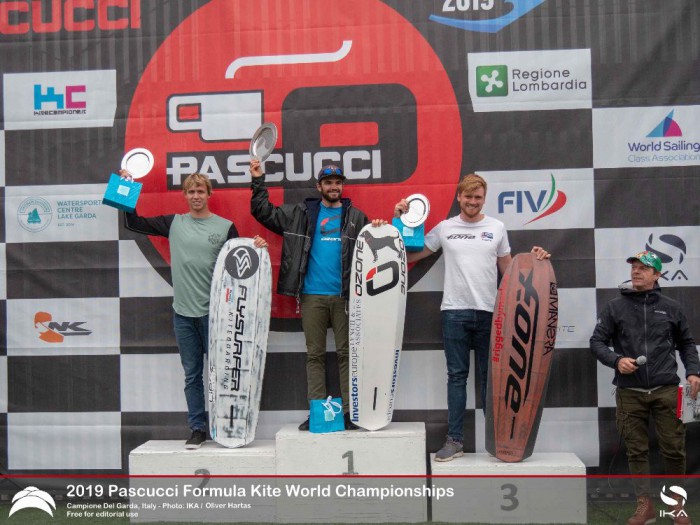 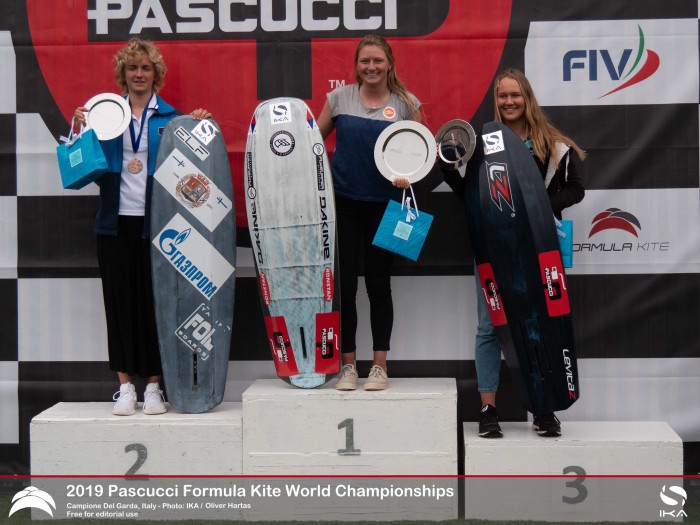 France’s Nico Parlier and the US’s Daniela Moroz mounted successful defences of their titles in difficult conditions at the 2019 Pascucci Formula Kite World Championships played out on the waters of northern Italy’s stunning Lake Garda.

For 18-year-old Moroz the crown was a remarkable fourth in succession, while Parlier could bask in the glow of three back-to-back Formula Kite world titles in the face of increasingly-stiff challenges from ever-quicker fleets stacked with talent.

Moroz came into the five days of competition in a relaxed frame of mind, but was nonetheless stoked with her unbroken haul of titles against a growing women’s fleet eager to break her dominance.

“I’m absolutely delighted,” said a beaming Moroz. “It was challenging and I learned a tonne. I know it’s only going to get harder from here as more girls start getting into it and begin training with more intensity. It was pretty cool racing on iconic Lake Garda for the first time, too.”

Likewise, Parlier sees that kiteboarding’s inclusion in the line-up for the 2024 Olympics in Paris has made the competition even tougher with a host of new young faces, which only serves to make his third championship victory sweeter.

“I’m really happy as I didn’t expect it much,” said Parlier. “It’s definitely getting harder. The guys are getting quicker and it’s pretty tight. I felt really fast, but many are close to me. The starts were insane with 30 in the ‘gold’ fleet. The racing was really interesting here under the cliffs.”

The championships—hosted by Campione Univela and supported by Regione Lombardia—fizzled out in slightly disappointing fashion when an icy 40kts storm blew over the track, coating the overlooking mountains with snow and preventing racing on the final day.

The opening men’s qualifying series for the 87 athletes had been shortened, too, by a lack of wind on day three, with another day given over to the first trial of the mixed team relay format to be used when kiteboarding debuts at the Olympics’ Marseilles sailing venue.

But with enough races on day one to seed the top men’s “gold” flight, the athletes and the women’s fleet had each enjoyed four pulsating races on the championship’s fourth and penultimate day.

While Parlier and Moroz had dominated the opening races, they found the competition tougher towards the close. Parlier could only manage one bullet to match his second and two third placed finishes in breathtakingly quick and close racing.

Britain’s Olly Bridge, returning after break when he seems to have recharged his batteries, took a bullet, second and fifth spots that were just enough to maintain his second place overall.

“I’m pretty happy to be honest; it’s a good result,” said Bridge. “I wasn’t expecting too much. I was riding well and making good moves in the races, so I was pretty relaxed. I felt good and I think that helped.”

Bridge just edged out fellow countryman Connor Bainbridge. He finished equal on points but lost out on count backs and took the third podium spot with what was still stellar racing in the ultra-competitive fleet.

“I’m super-happy with the result,” said Bainbridge. “I definitely wanted to be on the podium, and it’s nice to be there with Olly Bridge and Nico Parlier—two others at the top of their game. But the next stop I want is top of the podium.”

Former world champion Russia’s Elena Kalinina was equally pleased with her second podium spot, clinched in such a spectacular setting at Lake Garda against such a tough fleet.

“I liked this competition a lot, and I’m happy with my progress,” said Kalinina. “I really enjoyed this spot and racing in the girls’ fleet. It’s got so big it will definitely push the level, which makes it interesting.”

Great and congratulations to all the competitors.