Really enjoy this thread, I just transitioned from the free ride wing to the carver. Love the carver wing. As for the largest wings I’ll stay a year behind the curve.
Top

As mention on the bullet Thread, we are also introducing next month a larger carbon 950cm² carver wing.
It should match all previous alloy foils and carbon ones.
more news soon.
The G10 carver is an awesome wing.
Of course there is now a trend of the wide wings but with kitefoiling fast wings is a must compare to large surf wings, as you could increase speed in turns, personnal choice.

Great to hear that it will be compatible with my blue and white. Anymore details you can give at the moment? Shape? Price?
Top

Pics of the new wing can be spotted on IG from the Defi Wind/Kite festival. Looking good.
Top

Agree, that a bigger wing does not mean you dont need a "medium" one.

The Carver wing is IMO the best allround size for everything

And then a bigger wing can be used as an additional wing for riding waves if you like a bigger wing for that, or practicing things, or for heavier riders.

But eventhough I find a big surf wing really fun and awesome sometimes in waves, I also pick my 790 cm2 wing very often, almost same size as the Carver, simply because it is still a relatively big wing, but gives you so much more fun allround because of its speed and lower drag, and they can ride quite slow too.
A universal wing size so to speak

IG = InstaGram
Think its here, black, between a signature foil and what looks like a blaster foil 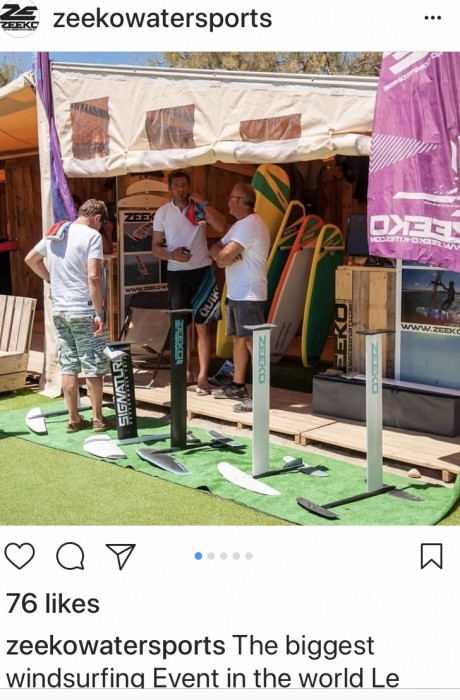 I learned on a small wing, the moses 550. Almost a hundred hours on it. Couldn't do a footswitch flying. Then I got the 590. Didn't really make a difference.
I was having problems with seagrass at my spots, it kept ruining my sessions.
Then I caved in and got the moses 633, 1200cm2 wing. Boom, was doing flying footswitch in 2 sessions, much more confident. AND! The seagrass wasn't a big problem any more. A bit gets caught on wing, I can still fly. This was the biggest advantage.
I tried going back to the 550, it wasn't that much more difficult, but the seagrass was ruining the session! Same with 590. So I just went back to the 633 and stayed with it.

If I have only 1 or 2 small strands of grass on the 550, it won't fly. I'm talking about a 3-5mm wide x 30cm long grass blade laying over the leading edge of the front wing trailing on top and bottom of wing. I can see them down there. I hate them.
Top

We have seagrass here in summer and it’s a pain.
But my Std wings on Spitfire seems to take maybe 5-6 strands before you feel a vibration. Any more and it slowly just sinks.
The XXLW starts to vibrate and wobble then you get dragged to a halt. There’s always about three handfuls to clear off.
Top
Post Reply
36 posts