So i have the slingshot 82 front wing with the original hoverglide rear stabilizer. I took this out last night. I have it mounted on a LF Galaxy 4'2". I weigh about 220 (100kl).
previously I had great success riding the slingshot 76 with the lf galxy in a 4'8" same stabilizer. When i went out with the new setup i completely flailed. It was embarrassing. I could not stay on foil, i was falling everywhere. I could not pump to stay on the foil It felt like the board was too shor.

Lots of variables here as well. I was foiling behind a 2019 mastecraft x24, with a massive wake. I could not figure out what speed to go, where to position myself on the wave.

Any thoughts or feedback would be great.
Top


Brand Affiliation: None
Has thanked: 204 times
Been thanked: 287 times

For some reason on stock pictures of a foil with Infinity 84 the stabilizer is mounted upside down. It would change stance and front foot pressure dramatically.
Top 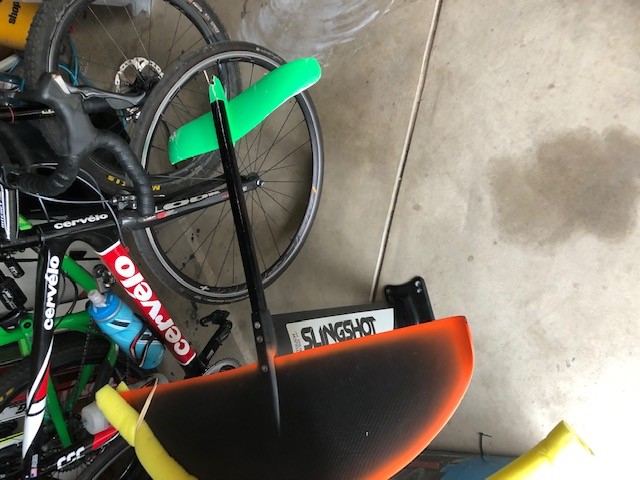 Are you saying i have the stablizer mounted wrong here?
Top

grigorib wrote: ↑
Fri Jun 28, 2019 6:31 pm
For some reason on stock pictures of a foil with Infinity 84 the stabilizer is mounted upside down. It would change stance and front foot pressure dramatically.

When using the 2019 rear wing it is meant to be on "upside down" compared to the smaller rear wing from last year.

My experience with the 84 is only with windfoiling, the wing is so lifty I'd expect a further forward stance would be required compared to smaller wings.

skideeppow, not sure if your question was rhetorical, but that looks fine given you have the older rear wing.

First test behind the boat with the new super expensive major-gift Infinity wing ... couldn't stay get it to stay up on foil. Kinda freaking out, spent all this money for nothing, etc. Then looking at it, eventually realized....stab was upside down. The fuselage fits into the wing either way, so an easy mistake to make (and posting to seabreeze forum about it after, lots of people chimed in saying the same). The way to tell: the bolt holes on one side of fuselage have a slight countersink, so that the barrel nut drops into it. If you have the fuselage upside down, your bolt heads will stick out of the wing a little bit ... that's your telltale.

Anyways, probably not your issue, looks right in the photo. Maybe you need to play with mast position forward or back? Further back for less lift or further forward for more (or can move your stance accordingly). If your board has any rocker around the foil insert, could add shims to have it more even. Can also play around with shims on rear stab possibly, to fine tune it.
Top

I usually windfoil with mine. Last week I used it behind a boat for the first time. I had the mast behind the wing not in it. It worked really well with tons of lift and was very stable. I was using the larger rear wing on the bottom of the fuselage. When I first got it and used it as a windfoil and had the wing on top and found it worked but it had more lift when I put it on the bottom. Again when I used it as a windfoil I first mounted the mast in the wing and did not like it because there wasn't enough lift. Then I moved it behind the wing and it was stable and had lots of lift. Not sure if that's your problem but maybe give it a try.
Top

Slingshot sells a different stabilizer (48cm wide, instead of 42cm) to go with the Infinity 84 wing.

If you look at the full package w infinity 84, it has the larger stabilizer, and it is mounted underneath the fuselage instead of on top.

AND, the mast is shifted backwards on the fuselage (windsurfer position).

So, 3 big changes between how you are using the infinity 84 wing, and how Slingshot designed it to be used.

I have a hoverglide setup, and wanted a big wing, but went with the infinity 76 instead of 84, to avoid these setup issues. I figured if I wanted the 84, I should by the whole setup together (different stabilizer/fuselage), at at that point, there was no reason to stick with slingshot...
Top
Post Reply
7 posts • Page 1 of 1