It showed the ball release that comes with the Pintxo bar (which has no swivel), threaded through the Wichard in the little gap above the release arm. That solves the problem of losing your kite if the Wichard self releases. 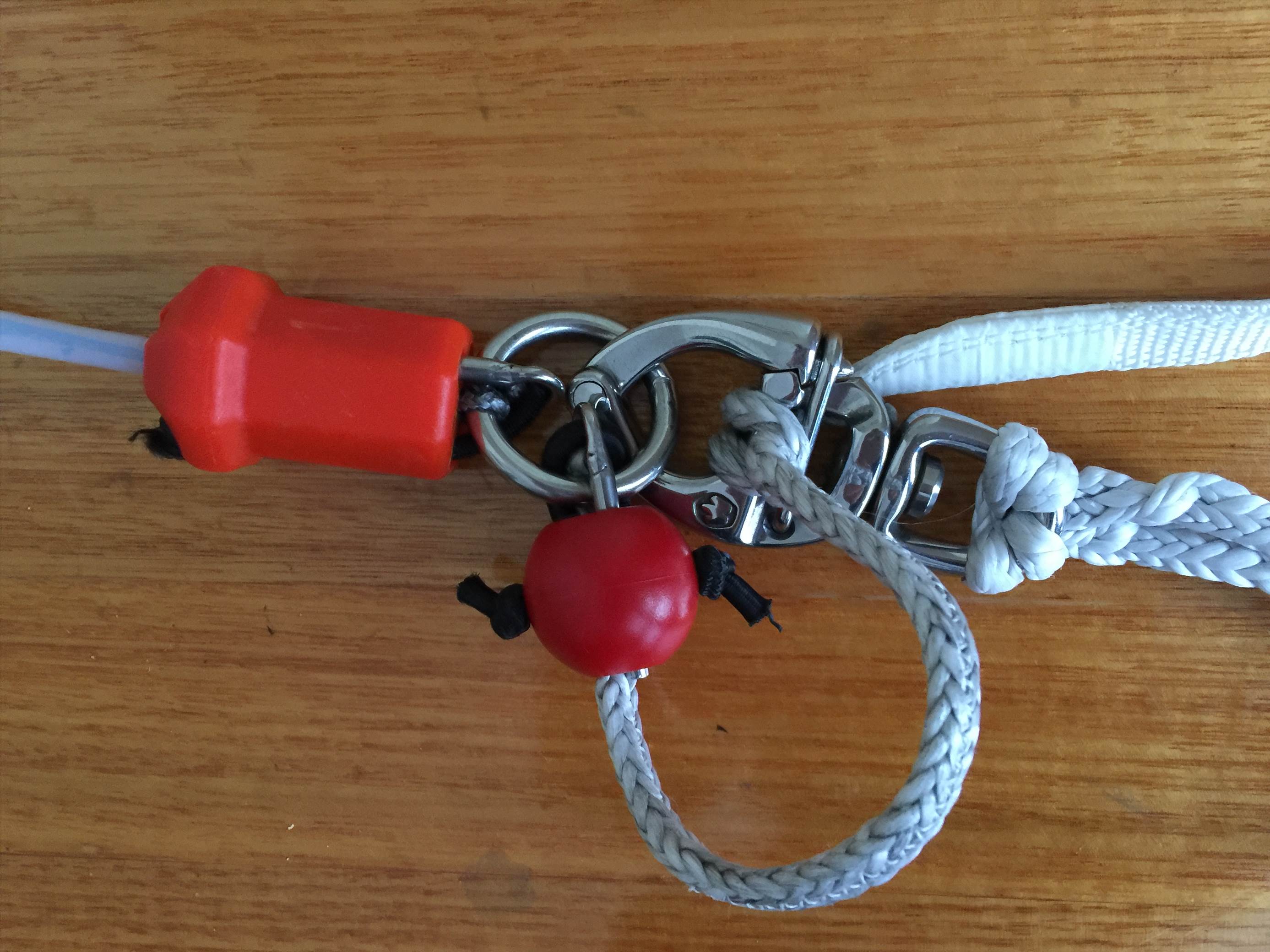 In an emergency you do the normal push away of the red barrel to release to the safety leash.

If you want to ditch the kite then you have to release the Wichard THEN release the ball release.

It effectively makes the Wichard into a rotating harness hook or sort of chicken loop.

It's a little bit clunky. You have this extra ball hanging around doing nothing much, and when you hook in you have to attach two things. I guess that's no different having to put your chicken loop on the hook then attach your safety leash. It's certainly better than losing your kite. It does give you a reliable rotating attachment and a safety leash and it does away with the chicken loop.

I had shelved my Pintxo bar because the possibility of the Wichard self-releasing made me nervous. It had never self-released but I had other bars with better systems and bar end bungies and all the other good features. It is so much more relaxing to know that there is no chance of losing my kite, and to finish a session and simply wind the lines on the bar, pop on the bungies and go. I might try the Pintxo again with the additional safety ball and see how it goes. I really liked the compactness of the Pintxo, and the long travel on the depower.

that's a great setup, I will use it from now on.
Just releasing the ball is painfull though (watch your fingers!)

Pintxo is indeed a really great bar for foiling.
Top

What does that mean?
Top

I mean using like a pitail connected to the wishard (like on the pic) and using the loop from the ball system to connect to it (like you connect a line with a loop to a kite with a knot).
In other words I would split the ball release in two.
So you don't have to pull the ball everytime you want to disconnect (fucked my fingers a few times with it...)

Can't take a picture right now as my gear is stored in the beach club...
Top

I understand. If you put your thumb or finger on the pin it stops it flicking around and smacking your knuckles. It's the exact reverse of the action to connect it. I just tried it about 10 times in a row with no pain or damage.

I would be more inclined to do that than add yet another kludge into the system to make it reliable and foolproof.

Another option is to just get rid of the Wichard. Using the ball release as a micro-leash means the Wichard really only functions as a swivel. I really like having a swivel but in recent weeks all my kite loops have been followed by a reverse loop to unwind the lines. It's easy to and the boost of power is quite fun, especially of there's a wave to run along. I could try just using the ball release as the only attachment with a normal kite leash attached to the ring.
Top

With 2 unexpected releases by wichard snap shakle on my last deep water foil trip I've almost gave up on this shakle but after last mod with the addition secure I will give it a last try..
I have added a stretch rope that increase needed release force up to ~2-3kg (need to examin) with still easy usage while snaping.. check the pics below:

Thanks all for sharing ideas and experience.
My two cents :

-ball & pin release may already hurt the fingers when it flicks open. Imagine under load, kite looping etc...
I have experimented with such release just hanging with my weight it the harness, fingers or palm can really get hurt.
The way I found to limit the issue is to use a longer pin (less leverage) with rounded end, and longer handle (the ball I find too small)

-tried similar setup in the end the greatest benefit I found was the long depower throw and having the bar sheeted in closer to the body.
This also can be achieved with a very short chicken loop and longer depower throw (just modifying the depower rope)

Having said that I really like the slick minimalistic approach from Kauper XT, good to propose something different
Top
Post Reply
247 posts