Another problem too is a huge bag of hardware. My screws may have been too short. I know better now.

Amazingly, and I would never have guessed this, the 633 carbon was much stronger than the ss screw! Foil suffered no damage and the screw sheered! Now that is a strong wing in my opinion!

But I also notice that the first of the 2 bolts holding the fuselage to the mast, the bolt closest to the end of the wing is always loose when I come in no matter how much I tighten it. I assume it must be the load put on the bolts. I may use a split washer in there in the future to see if that helps.
Top

Brand Affiliation: None
Has thanked: 61 times
Been thanked: 118 times

But I also notice that the first of the 2 bolts holding the fuselage to the mast, the bolt closest to the end of the wing is always loose when I come in no matter how much I tighten it. I assume it must be the load put on the bolts. I may use a split washer in there in the future to see if that helps.

Ii reported on this a few months back, it happens to a lot of guys who use the moses carbon mast, mine is the 101 mast, the other screw remains good and tight, but sometimes the "loose screw" I can spin out with my fingers, yikes!
Split spring washer makes no difference, dry thread or greased up, no difference, Loctite blue makes a slight difference but a mess to clear as the blue stuff turns rubbery and bitty, .I carry an allen key with me every session and sometimes stop to re-tighten, but it still comes loose.

Thanks for the heads up and saving me time by avoiding your noted experiments!

So, yes, tighten everything before each session! Lesson learned on Sunday!

Yes, i have the same problem. Cant understand how its so possible such magic loosening every time.
Top

I have the 107 cm Slingshot/Moses Ghostwhisper mast with the 633 setup. I have never had any of the mast bolts loosen up at all in three years. It might be interesting to compare the difference in the 2017 Moses vs 2019 Moses masts to see what's different re the forward bolt hole.
Top

Review of the Moses 790 Wing

Yesterday I was able to ride my new 790 for the first time.

I was anxious to get to try this wing after trying the 873 yesterday in calmer conditions. It really wasn't the ideal day to try a big wing - I was way overpower. Twin tip guys out on 9m, and surfboard guys on 7m. Tucker from Mackite said the wing was between the 873 and 683/633 which I found to be spot on, probably closer to the 873. The wing was boringly stable, easy to stay on a foil and refused to stall. I attempted my typical surf style carving which the wing performed well, with the exception of the fact that its span is so wide that was easy to breach the wingtip which caused immediate cavitation, loss of lift and plop in the water. In fact, the 683 also cavitates a lot, where the 633 doesn't. I found the 790 to be the big brother of the 683 in that regards. So if I want to really lay the board and foil on its edge for surf style carving (bottom turn, off the top of the wave/swell, back off the bottom, rinse and repeat) then I must keep the board low to the water. If I'm too high off the water surface it is a gurantee to breach and lose lift.

I liked the foil but especially for the windy conditions I rode it in the found that I was fighting its tendency to want to ride flat and stably by me wanting to carve it like crazy. It put a real workout on my legs. When I decided to take a break from surf carving I mowed the lawn with it for half hour or more, it never breached or cavitated and it was a pleasure to ride, albeit in windy conditions.

I did decide to go grab my 683 and swap wings because it was still windy and the swell was epic. Hoping on that wing was absolute pure pleasure, night and day. I felt invincible. I could carve hard, lay the board on its edge and throw massive imaginary spray off the top of the swell. I could generate tons of power off a pumping bottom turn and the wing (683) was pure joy to ride powered. (And, I was thankful for the bigger wings, especially the 790 because by forcing brute force carving on the big wings in trains your muscles so when you hop back on a small wing (relative of course!) you can see how the 790 workout pays off!

I'd say in looking back at your original question:
The 633 is a moderate wing. Do experiment with a 450 stabilizer, then perhaps the 330, or even the 325, in that order...
Forget the 683. Nearly exactly the same wing as the 633 (in my opinion, at least on the slow end) but with some problems with cavitation (I experience this fairly often and so does another foiler I know who sent the wing back for the 633)...
Do consider a 790 or 873 for pure stable lower wind cruising. I sure like that 873 but it is a beast. I'd get that if you want to move in the direction of super small kites (3 - 4m) or no kites or 1 line kites! Otherwise, the 790 might be more reasonable and less boutique.
And still no comments on the 590 as I've yet to ride mine!
Bear in mind also that I ride slower than most and never in a straight line!

Hi Tucker. If you could answer a couple of questions I'd appreciate it! Got a good ass kicking on my 590/330 yesterday.

First problem was mast track in middle on my dwarfcraft 3'6". I literally had to ride w/all weight on my back foot. Came in and slide mast all the way forward. I still felt very back leg heavy. Back strap in #3 position (it won't go back to #4 without a long screw which I don't have to put the strap on the bump). Front strap was in #2 position. So for today's trial I slide it back to the number #4 position (all the way back).

It felt good up and riding and it was the easiest foil to toe-side water start that I've tried. I lost lift quite a few times plopped into the water. It was harder to get going and I felt like I couldn't put any weight on the front foot. By moving that front strap back 2 positions I'm hoping it will help. This may be a limitation of the dwarf craft? Not enough range in the mast track?

The wind was strong and gusty yesterday. But I had to really rely on the kite to stay on foil. I had way less glide and I had to work to keep the kite hot and to keep moving.

Any other tips you can think of that may help? Can I cheat and put the 450 stab on or should I just keep practicing w/the 330?

After I got it dialed I could pretty much ride w/o falling, except when I luffed the kite or rode in a lull. But I had to really work to keep everything powered and moving and couldn't be lazy. And, once I more or less got it figured out my back leg was still pretty loaded and getting sore.

Hi Joe,
it is a limitation of nearly all boards, even those of Groove who are the only ones using longer tracks with 10 cm of movability (for 16,5 cm plate). For all my foils I would require up to 20 cm, so 35 cm long tracks. But you can improve your strap position significantly:
First, NEVER use a longer screw for the hole under the tail bump, as if once entered you may start to screw it more and more down when the pump gets pressed together and then invisibly crash the plug -> Water in the board.
Try to press the pump down as hard and as long till it stays there (can be effort, use wood log, board upside down but carefully to not overload) or cut the bump away (unfortunately just GONG builds boards with a cut out bump).
If you additionally turn around the strap for the back screw you may get around 6 cm extra backwards foot placing, as shown: 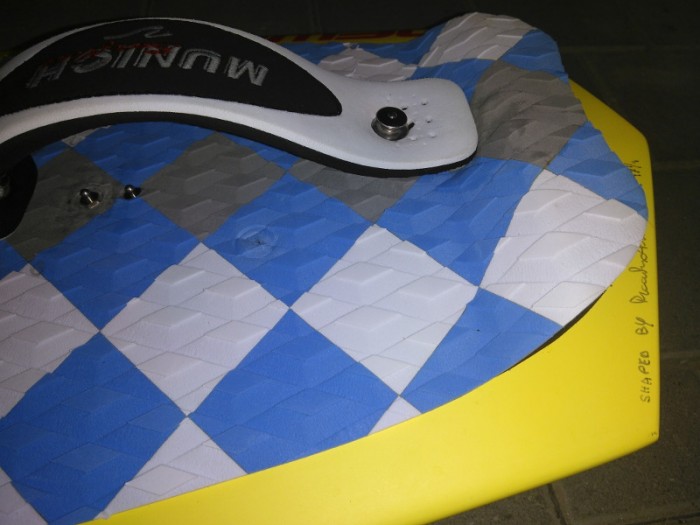 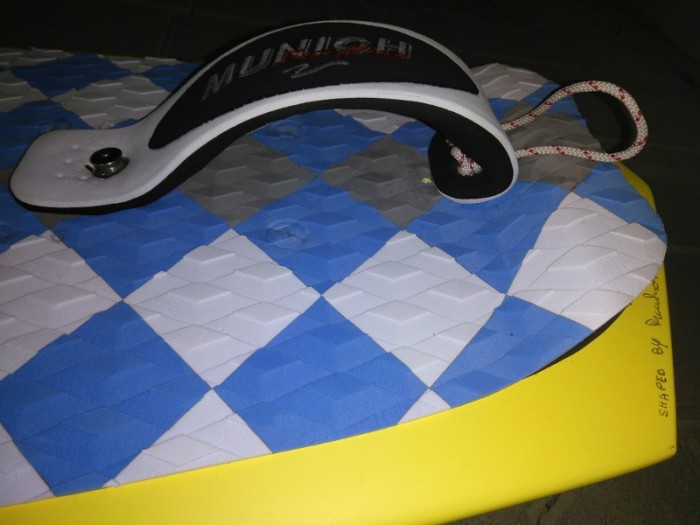 Otherwise you just can rise negative angle of attack of the stabi or take a bigger one, to get your pressure point towards front foot, but this will also rise drag, so wouln't be my favour.