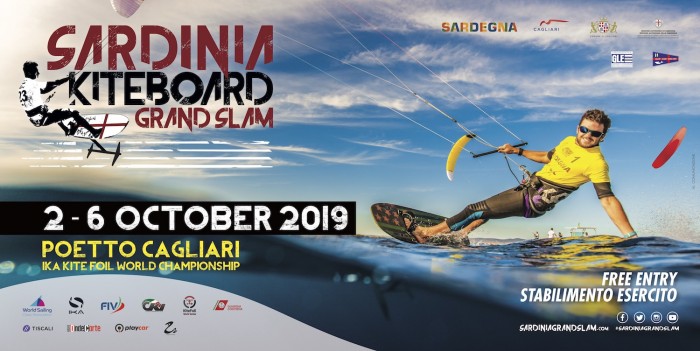 Cagliari, August, 27, 2019 The IKA Kite Foil World Series is ready to return for the third consecutive year in Italy, in what is now globally recognized as one of the best locations to practice kiteboard in the world, Sardinia. From 2 to 6 October, the Poetto’s beach of Cagliari will be the scene of 2019 edition of the Sardinia Grand Slam World Championship, the third stage of the KiteFoil World Series!

Once again all the strongest kite athletes will arrive in the Sardinian capital, joined in the desire to win the World Title 2019.

After two years of victory by the French Nico Parlier, ruler of Sardinia Grand Slam 2018 but mocked last year in the general result by the current World Champion Maxime Nocher, the challenge has risen up again this year.

In addition to Parlier, Nocher and well-known KiteFoil champions such as Mazella, Bainbridge, De Ramecourt and Gruber, fighting for the world title, joins the young Slovenian Toni Vodisek, who at only 19 years has already won the first stage of the race that took place from 24 to 28 July in Gizzeria.

Moving on to women, the 2018 title went to Kirstyn Obrien, author of a not particular brilliant performance at the Poetto but rewarded by the constancy and by what she has done at the first two stages of the KiteFoil World Series.

The Sardinian public was enchanted by the young American Daniela Moroz, who this year looks like “the athlete to beat” after she attained the 18th place in Gizzeria (first in the female category).

Put under special observation is our own Sofia Tomasoni, 2018 Olympic Champion at Youth Olympic Games in Buenos Aires, Champion of the World, Europe and Italy of TT:R (Twin Tip Race) who is taking her first steps to the world of Foil, determined to climb the charts and represent the blue colors at the great Olympic debut in Paris 2024.

Soon will be held the two Chinese stages of Weifang and Pingtan, now considered a “cult ”of the Kite Foil World Series, to getting the overall ranking updated and figure out which athletes will compete to bring home the 2019 World Title at the Poetto’s beach in Cagliari.

"Poetto beach will be the last stage of the Kite foil World Series– is the comment of Mirco Babini, President of the IKA – International kiteboarding Association, who added – with the inclusion of Kite foil in the Olympic disciplines of Paris 2024, this event is becoming increasingly important all over the world. It is no coincidence that in Cagliari we will have more than 100 athletes from more than 40 countries spread over 5 continents. Certainly, we will see a great show in water among the 10 strongest athletes of this discipline and with the partecipation of many young people ready to show to the world their worth".

“Cagliari and its Poetto beach are once again a reference point for the international kiteboarding; says Gian Domenico Nieddu of the Good looking Entertainment Agency – This city confirms itself able to host hig-level events like this, both as regards kiteboarding, and in general all sports with sailing. Poetto is now recognized all over the world as one of the best place for competitions and training. I hope that in the coming years this natural heritage will be further enhanced by constant strategic actions as the organization of events.

The Sardinia Grand Slam World Championship is organized by Good looking Entertainment and the Yacht Club Cagliari, which is responsible for the technical coordination of the sport, under the auspices of IKA (International kiteboarding Association), with the contribution of the Autonomous Region of Sardinia, the Department of Tourism and of the Municipality of Cagliari and some private companies.