Thought I'd share my new toy! Picked up the Slingshot Outwit 5'10 to try and learn to prone foil surf; figured the 100L volume would help. After a few hours I learned that even lots of volume won't make your life THAT much easier. Couldn't get prone foiling but was able to ride a few waves on this board. Better than what I was able to do with the Slingshot Simulator (36L) and the M200. Note: this is deep inside the FL panhandle where the surf report doesn't even have a forecast; waves aren't "waves" but I keep dreaming.

I figured I should learn to fly the M200 wing as I've primarily only windsurfed with it. Started out when the wind was blowing around 15mph, which is way too much for the Peak4 5m and a big wing but it handles fine. Once flying, at 5'10 the Outwit doesn't feel much different than a big surfboard but it does feel heavier when maneuvering. The M200 wing kites fine. I never breached the wings going upwind but a wing this big is much slower to respond to turns.

Wind started to drop to 10mph and less. This is when I finally got to try some of the ideas I had about a big board like this. The idea of climbing on the board, standing up and while holding the kite starting to foil is EXTREMELY hard. Other than not being very stable due to short length, the kite makes it hard to balance while flying it. Easiest way to get started is a regular waterstart. When that's not possible, straddling the board, diving the kite while getting on your knees and diving the kite again to get going works. The speed of the small Peak is perfect for this! Upwind is abysmal below 10mph. It's just too easy to completely back stall the 5m in such light wind. But because of the volume and the big wing, going while pumping is possible. Just not upwind. You don't sink on touchdowns, you keep gliding and just lose ground until a gust and you gain some ground back. Fun? Well, that's debatable. When I catch the shin high "waves" and the Maliko 200 gets going, I think it is!

I'll be trying the M280 wing and the 5m at some point. Mostly just to learn to pump it. Doing a flat water SUP to foil start is out of my league. My favorite wing to kite has been the Iwa for the longest time and I believe I'm better at pumping that than the M200 or the M280 as I have very little time on them. BTW I'm 180lbs, so I'm not doing this because I need more volume or lift, just wanted to see what if!? 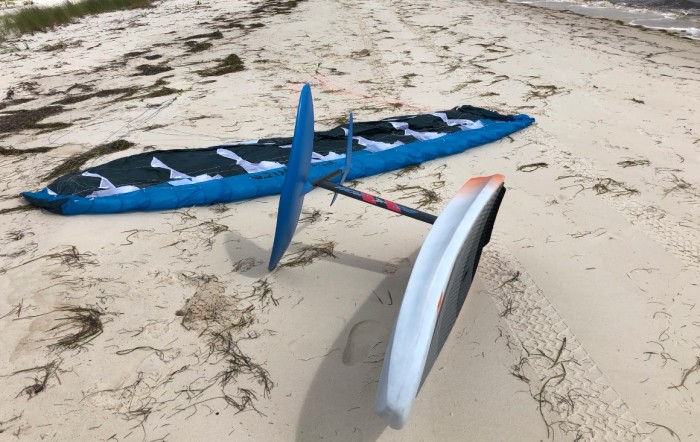 Tried the board with the M280 wing and the Peak4 5m. HoooWeeee! This wing is massive and quite hard to kite with. The wing has so much float, I’m guessing maybe 5-8L of volume, that the slightest mistake makes it want to popup like a cork. The volume makes upwind a bit difficult because you can't lean hard on it; at least in lighter wind. It's very slow and draggy but makes up for the lack of playfulness in the long glides on tiny waves. The M200 felt much faster and livelier but definitely had less glide.

This setup has made me want one of those wing-a-things but I really don’t want to go that route. I’m thinking of trying a two line trainer with very short lines that I could pack up really quick once I’m up on the foil riding the wave. Maybe somehow attach it to a paddle and roll it up once foiling? I found some pictures people doing something similar, even one with a sail that fit inside the paddle. Gunner did something similar with the 6m single skin and 2m lines but that still looks a little too complicated unless you just packup once and do a downwinder.

Really liking the setup though, will definitely play with it again. I'm hoping that getting used to this wing and learning to pump it as I have with the Iwa will make my progression to SUP/prone foil surfing easier. Big wings are very different to their smaller counterparts. 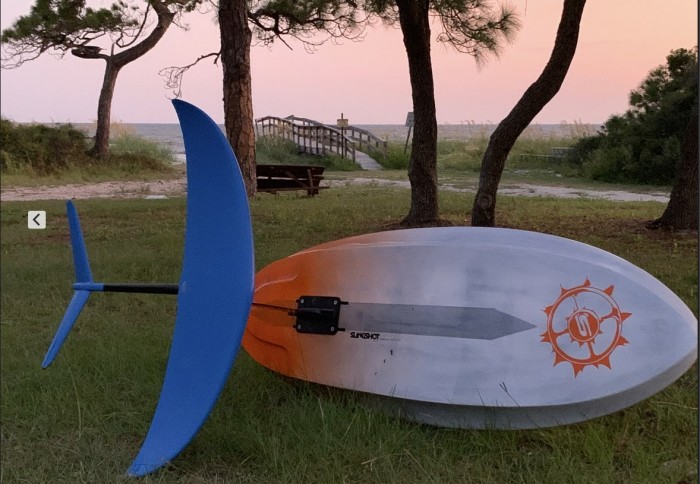 Your post inspired me to try something similar but half the the volume. I bought a Slingshot Skywalker 5'10" by 21" with 51 litres of volume. The idea would be for two situations: very gusty winds that are strong then quite light and really light winds. In really light winds the volume of the board allows me to stay up on the board giving me time for a second dive of the kite to get up on the foil. Yesterday I tried it in very gusty winds. It was going from about 25 knots with lows around 12 knots. The large volume board allowed me to use a small kite to handle the gusts but when the lows came I was able to keep moving along on the board on the surface while waving the kite up and down. It worked quite well. The board made what would have been quite difficult conditions fairly easy to deal with even though I could not stay up on the foil all the time.
Top

So true, also the very reason I choose a bigger and bigger board, the lower the wind, sometimes much more fun than rigging a bigger kite, for me at least

I know most here go the opposite way, as small a board as possible on all cost.

How's the Outwit compared to Fanatic, Naish Hover etc... ? I'm looking at the Outwit 6"6 for SUPing and Winging.
Top

I experimented kiting with my Iwa foil and 155cm board. It's quite fun in a perverse kind of way. You can walk around on the board and have both feet up by the nose. It's pretty close to hanging ten.

The stand up on the tail water start is a strange kind of fun. It just hovers there with the nose up in the end. You can often walk up to the nose and press it down and ride away.

I gave up using the Iwa as a light wind weapon. Yes you can start straight up on the foil in very little wind, but if there's not enough power to go forward then you're just standing there not moving. My J Shapes Cruzer is easier to water start and can get going in the same low winds. I might revisit the Iwa with a small kite, just for fun.

My 155cm board was my first proper foilboard. I now dig it out for light wind days because it is so forgiving. Water starting and surface riding in light winds are fun with the right size board.

Kiting a large board with a hydrofoil..... How is that chickenloop going? When will the delusions end?
Top

Last night I tried the Iwa with my 120cm board and 4m Switch Element kite in 20-25 knot southerlies.

It was surprisingly good fun. I keep thinking it's like riding a penny farthing bicycle. It works. It's stupid, but it works.

Water starting takes a little getting used to. Back foot forward and send it downwind to avoid the tail standing behaviour.

It's extremely slow. That's part of the silly fun. I have been able to get it up to a half decent speed (16 knots) but that sort of defeats the purpose of riding a big arse foil.

The Iwa is much more comfortable riding through white water than my J Shapes Cruzer. The J Shapes feels like riding over rough corrugations, the Iwa is just a minor vibration.

Turns are surprisingly tight, almost a 180 spin. I only tried one tack (and fell). It feels like the spinny turns you see in the videos.

There was a heap of leverage from the big foil. I could feel it when things got a bit off axis and a crash was almost certain.

The small kite worked just fine. I see why the tiny board, big foil guys do it, but I don't think it's something I would pursue. Maybe a big board, big foil would be more fun. It's nowhere near as much fun as a smaller foil.
Top

True, I dont find it fun either, this combo, too slow and dull for general riding...
Sometimes fun in waves though

But the combo huge board huge wing, BIG kite, is the name of the game for marginal wind

Okay, the wing does not need to be huge, just big, as you get more apparent wing when not too slow