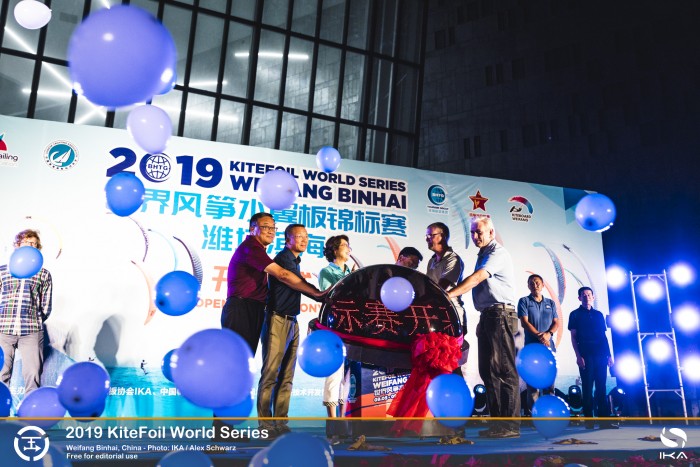 The world’s fastest kite hydrofoil racers have been testing the north-eastern Chinese waters off Weifang Binhai in practise ahead of the much-anticipated second stop of the 2019 edition of the KiteFoil World Series.

The €60,000 prize purse—the richest in kiteboarding world wide—has drawn most of the leading names eager to test their pace and stake a claim for the “open” kitefoil world championship title that will be decided at the climax of the four-stop tour.

Over four days of competition on the clear, flat waters off Shandong province’s Joy Sea Beach, 35 athletes from 15 nations will battle for honours on minimally-restricted equipment, designed to foster on-going development of the cutting-edge kitefoil discipline.

The athletes will travel south in China next week to Fujian province’s Pingtan island where another hefty $40,000 in prize money awaits leg three leaders. The world champions are to be crowned at the International Kiteboarding Association’s (IKA) KiteFoil World Series finale on the Italian resort island of Sardinia next month.

But the World Series’ opening act in Gizzeria, in Italy in July, has already thrown up an exciting juggling of the established order with the victory of 19-year-old Slovenian Toni Vodisek over reigning and former world champions, the French duo of Nico Parlier and Axel Mazella.

Similarly, the women’s pack was reshuffled slightly by the arrival of Britain’s Eleanor Aldridge, who burst on to the scene to grab the second podium spot, splitting the reigning and former world champions, the US’s Daniela Moroz and Russia’s Elena Kalinina.

All are set to fight it out again in the expected slightly lighter conditions of Weifang Binhai, before heading to the predicted punchier breezes and bigger seas off Pingtan island.

Nocher will be hoping to assert himself again in the coming days of high-octane action at Weifang Binhai, in what has become a fixture on the kite racing calendar. But he will no doubt be pushed by Britain’s Guy Bridge and the increasingly-quick Singaporean junior Max Maeder, still just 12, France’s Théo de Ramecourt and Titouan Galea, and Germany’s Florian Gruber.

With 15 women racing in the same fleet as the men, four-time Formula Kite world champion, Moroz, will be again pursuing her dream of breaking into the top ten.

But the other women, including reigning KiteFoil World Series title holder, the US’s Kirstyn O’Brien and ambitious local favourite Jingle Chen (CHN), will undoubtedly be snapping at her heels in the unfolding drama’s coming days.
Top