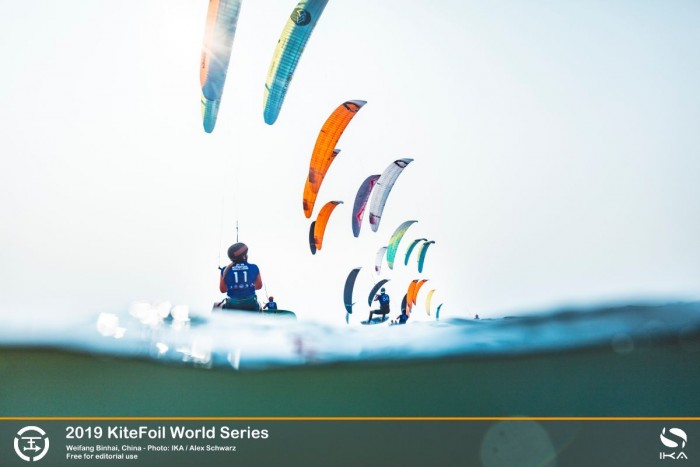 Little separates the leading pack at the head of the order at the KiteFoil World Series in Weifang Binhai, north-east China, after another day of scintillating racing where the top athletes traded high-placed finishes.

Just two points lie between the top three men after 11 high-octane races at the half-way point of the four-day competition being played out on the Yellow Sea off Shandong Province.

With 2019 World Series’ tour leader, Slovenia’s Toni Vodisek, 19, claiming three bullets from the second day’s six races, it appeared he could steal a march on the leading trio, before some misfortune and a couple of mixed performances left him in fourth spot overall.

France’s former multiple world champion, Maxime Nocher, just held his lead in the standings with four remarkably consistent second-placed finishes in breezes that began the day averaging 15kts, gusting to 18kts, before easing back to 9kts.

Another former world champion, Germany’s Florian Gruber, retained his second spot by a whisker with an impressive outing that racked up two bullets, a third and three fourth places, a performance that proved his prototype Levitaz race foil has the pace to match the Mike’s Lab Bullet foils under the feet of most of the leading athletes.

France’s Axel Mazella, also just one point adrift, closed out the leading trio. His day was a model of consistency with scores that included a bullet, two seconds and two thirds in the increasingly-tight and ever-quicker kitefoil fleet.

The early promise of strong winds fuelled by a typhoon skirting the windward-leeward track failed to materialise, but the breezes that prompted many of the competitors to eventually put up their largest 21m kites were more than enough to foster searingly-quick racing.

The Weifang Binhai World Series’ regatta—with its €60,000 prize purse—is the first of back-to-back tour stops in China, ahead of the climactic finale on the Italian resort island of Sardinia next month when the best overall riders will be crowned KiteFoil world champions.

Reigning KiteFoil title holder, the US’s Kirstyn O’Brien, one of 15 women racing among the 35-strong mixed fleet from 15 nations, has shown growing pace and consistency in Weifang to the point where she currently sits between Formula Kite world champion, Daniela Moroz (USA) and former title holder, Russia’s Elena Kalinina, on the leaderboard.

“The competition here in this fleet is great,” said O’Brien. “Now everyone is closer together all the way round the course. That’s why I like racing with the guys. You have others close by to measure yourself against. It helps a lot that I’ve been training with some guys in the Dominican Republic, rather than on my own in the US.”

Mazella, sitting in third spot overall, was also happier with his improved performance on day two that kept him hot on the heels of the leaders, though like the others he was looking over his shoulder at the charge of Vodisek in fourth overall.

“After the first day everyone was super-close,” said Mazella. “And again today it will be tight on points. But I feel I’m going better today. I made better starts for sure, which helped a lot. As the wind got lighter, if you had a poor start, there was just no way to make a comeback. I was pretty consistent.”

Nope, nothing has been updated for Weifang, the link "Single Series Standings" is still going to the results overview page and it's already Sunday morning in Weifang while I'm writing this. It would be super duper awesome to see the current ranking after two days with all participants, not just the top 5. For example Theo was in the video but is he actually competing?
Top

Any pics of the proto Levitaz race foil anyone?
Top
Post Reply
4 posts • Page 1 of 1