+1 Ketos
I have had 3 different brands of foils (Alpine, NP/ Moses. Now I have a Ketos foil and a Groove naked carbon Wave board with a KF box.
Total weight board/foil is <5kg.
I am totally agree with Peter and I think what I have now is the best combination money can buy for a freerider.
Before I had a Groove Skate carbon with an KF box to plate adaptor for the Ketos mast but you don't get the stiff connection as with an inside KF box.
Top

Ketos is hands down the nicest option you could find. The board engineering is icing on the cake. I think it would be hard to find anyone who has seen a Ketos foil in hand that would argue against what has been said. Their stuff is absolutely beautiful. No doubt, it must be a pleasure to own. The set up I would go with would run $2185 US for the foil and $3121 US complete with board. Then add shipping.

When I snapped my alloy fuse, I had already done most of the research and sadly the Ketos was not in the budget. I went with Lift, am completely happy with it and think they deserve mention.

The foil was $1395 US with free delivery (took 3 working days). I have carbon board made locally. Complete set up is 4.8 kg. Foil came packed in quality covers I appreciate every day. Foil is two bolt assembly and very strong monocoque fuse and wings construction. They make a two piece version for those who want to pack smaller. Plate mast to board attachment. Not quite as stunning to look at as a Ketos foil, but in no way disappointing. The carbon work is plenty impressive and In my opinion the best priced full carbon foil on the market. I love mine.
Top

smallest board for ketos is over over a 107cm long..
..thats a whale for a pocket board.

imo, if money is less an object i'd check out:
https://thehydrofoilcompany.com/home
Top

@ elguapo you mean the MFC Foils? Yet, to my knowledge thehydrofoilcompany is working together with MFC, but has not produced something own?
Anyway, at my homespot, two friends of mine are on the MFCs, one has a Moses 633 and a Levitaz Cruzier and i'am on Ketos wave xl, Freerace, V2 1200
My personal pro and cons
Levitaz: Overengeneered, due to the steel fuse of almost 1000gr it is heavy , screws getting lose, timeconsuming to set up.
Despite of their tech background of the Geislinger Group , they didn't get the first series of masts strong enough.
The Cruizer wing itself is handsdown one of the best do it all wings, fast and a good jumper.
Levitaz seems to concentrate on the development of the (olympic) racefoils.

Moses can make a lot of new wings in no time, complicated production line with the need to buy different alufuselages & stabs when useing bigger surfwings and faster freeride wings. Production wise outside blingbling, inside a lot of foam and a tiny bit of carbon & glass. As we could see in a broken 633 ( hit a rock ).Imho they could do better with their compatibility and a better design & material of their fuse(lages) and a few more layers of carbon in wings and masts.Imo thats make a good product cheap.
They didn't bother to sell boards which didn't worked strapped with their bigger wings.

MFC 1075 and 1250 surf version are light, can take a beating, easy but fast, smooth ride.Drexler& Kai Lenny proved. The kiteversion with shorter fuse is different to ride than the surf version, which has a shorter mast, a buddy who tried both, said the kiteversions would be not better.
I guess they are also useing RTM. The conic connection btw fuse and some wings is not allways tight and on some wings you need a hammer to get it off.
But not a big problem. An other observation , unknown if problematic or not , are the tiny airbubbles which are coming out at the surface of the big wing when heated in the sun. MFC says no problemo.

Ketos, i own 3 wings and know best of all is a small familiar hand lay up producer.
Bc i have the most amount of personal experience with the pro and cons of Ketosfoils, the list (of cons) is longer but not every point is serious.
The website is basic, but the feedback via mail is fast. Bc of the language barriers some answers of the two Ketos ladies are short cutted.
The ladies do a great job handling orders and found allways a quick solution if i had a technical problem or a problem with the supplier.
100% customer service for what you paid( $$$). Sometimes they have forgotten one washer or send the wrong amount of screws, but handled these things very friendly and smart.
Their products just work period. Focus is on mortal free- and waverider. Race is not in their focus.Imho the main piece of a foil is the fuselage. Solid deep conical carbon connection btw mast - fuse and mast - board only needs one screw. Simple, solid, easy, fast. Same same the 2 screw connection of wing/stab- fuse. Changeable inserts! Fuselage 350gr !! All wings, stabs, masts are compatible. No need for a diff fuselage if changing frontwing. The most stabs are working with dif fwings.
The possibility to change the character of the foil with a smaller or bigger stab saves costs. Some bigger wings need longer screws, keep them save.
In wing design they get it right to produce easy smooth fast wings for a wide spectrum of user weights. It seems that the average french foiler has 65 kg, their stuff holds and works also with 90kg.
Ketos needs some time to develop new bigger wings and you have to be patient with some weeks of production time.
The boards have a very good shape, KF Box is strong and light. The strapinserts are metallic and the frontstraps can be mounted in 3 diff styles. The position of the backstrap is bc of the box a bit too backwards, for my taste.The nice PU painting on the boards is much to fragil, railsaver tape is strongly recommanded!
For faster heavier guys i would recommend the stiffer $$ racemast.
Price policy is transparent : Listprice and you get all the covers for free and one bisou. Boardcover does not allow transportation with mounted foil.
For my taste Ketos offers me the best product for my money.
No affiliation just my 2ct

+1 Ketos for the smooth ride and upgradability.
It is also a nice peace of art and engineering.

I am using it since a few years now and owned different wings, stabs and masts. All compatible.

Only thing is I find the boards too expensive and too heavy for my liking.

Still like my boards but all the rest, Ketos!
Most here also fly their gear!
At least for me and a few others, WAVE XL F wing, the 1200 cm2 is also well liked, S or XS stab, Race profile STRUT, standard fuse just works!
And most also fly their boards.
Cool because they were one of the very first to enter market after years of carbon composite experience, shows in their products, as
well as always doing R and D!
And just good people.
R H
Top

Still like my boards but all the rest, Ketos!
Most here also fly their gear!
At least for me and a few others, WAVE XL F wing, the 1200 cm2 is also well liked, S or XS stab, Race profile STRUT, standard fuse just works!
And most also fly their boards.
Cool because they were one of the very first to enter market after years of carbon composite experience, shows in their products, as
well as always doing R and D!
And just good people.
R H

good people for sure, very accessible if any question, and excellent service.
I broke my insert on the very fist day of a holiday and they sent me a new fuselage and front wing in 2 days, for free. I just had to return them after my holiday.
Don't know any other brand who would do that...
Top

Ketos has great products but very difficult for US customers to access. Also requires an adapter (sub-optimal) to use with most boards.

RE: MFC comments above. Drexler is no longer using MFC. Kai's brother is one of the founders of THC.
Top

Figured I'd add a few more thoughts on the Ketos foils after seeing the additional comments as I was kind of brief in my first response.

I don't believe there is a one-size-fits-all foil (or anything else for that matter), but for me the Ketos setup is near perfect. I pay for all my gear and have no affiliations.

Construction: Quality, durability, fit and finish it as good as you get, at least that I've seen.

Wings: Good selection, something to meet the needs of most wave/free-riders. I think that a 1000cm2 size would be a nice addition

Fuselage: As said, everything fits one fuse. I hear they are working on a shorter fuse.

KF-Box: Coming from a plate attachment I love the 1-bolt KF-Box attachment. It is rock solid. I bought the plate adapter just in case. I can't see where it would be any less solid than most other plate foils.

Boards: I got the 130 and sold my LF Galaxy 4'8". I had no issues switching and for now the 130 is the right size for me. I could see adding the 107 down the road once I get better (flying foot-switches). I'd have no issues using the foil and plate adapter with a board with channels but don't want to go back to 4 bolts. The boards are reasonably priced in my opinion compared to other popular boards and they are well built. Light enough for me. If you want something else there are other KF-Box board options, or just slap on the adapter.

Availability/Access: Agree that most people in the USA might have trouble finding a way to demo before purchase but it seems there are more of these around the country. I bought my setup without ever riding it, just after seeing it and reading reviews and asking numerous questions of current owners. Ketos is super responsive to queries. There may be a wait on order fulfillment as the gear is not mass produced. Benoit Tremblay / Concept Air is the North American distributor and does keep some inventory. I was able to buy my setup from him. It would be nice to walk into the shop and see/demo/purchase and have local after-sale support but I'm confident that between Ben and Ketos I'm covered.

I've owned and demoed multiple brands but for me it's Ketos! The 1200V2 makes everything easy and I am progressing faster than I otherwise would have. I'll be adding the WaveXL shortly.

If you want to check it out and are in Hatteras pm me. Pretty sure Ben will be back in the spring demoing kites and foils.

imo, if money is less an object i'd check out:
https://thehydrofoilcompany.com/home

For me at 77 kg the 107 is a tad too small for my liking, so between the 118 and 130 depending on wind is perfect for me, my stance and style, but very individual I know.


Mimi rode a 90 cm prototype I saw on facebook: 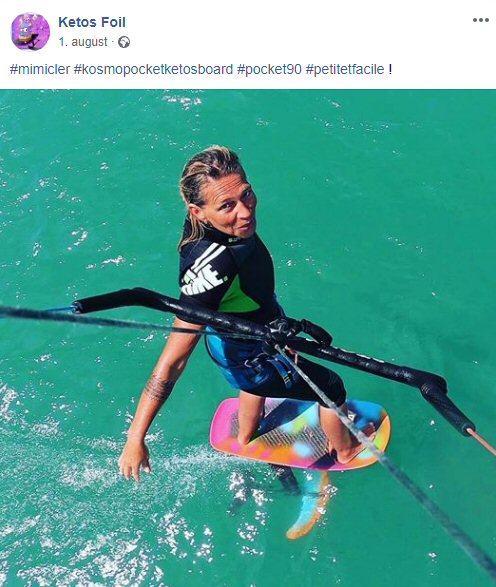 Asked Ketos right now because of your request.

Answer was they will probably have this size in the near future, very soon

So able to fit "all sizes"