More and more on this forum, the discussion has focused on surf-style foils, small kites, small freeride boards, and slow speeds and waveriding. This includes myself. But most of us don't have great waveriding conditions very often anyway, and there are other aspects of foiling that have a draw, at least for me.

I'm thinking about buying a race-style, or at least "freerace" setup and going fast and far for a change. Who else is riding fast foils? Do you ride both fast foils and surf foils? Do you use them for different things? What draws you to one or the other?

This post isn't meant to ask a specific question, but rather to bring up the topic of racier foils in what's become an era of surf wings and wave kites. What do you think?
Top

A nice change from the surf foil that can go fast is a monofoil. Take a look at Delta.
Top

Seen from my own view and what I see around, my take is:

Going up in wing sizes (= slow foils) some years ago, EVERYONE.

And shot a bit over the target, so lately lowering the size a tad - this is pretty normal in "history", just like having had huge kitesizes in the early days, thinking it was the hole grale, and then lowering the sizes a tad again, which worked much better.

I got two small and fast wings, I use a couple of times with straps, in order to jump higher in light winds - works great.

BUT, I dont know if it is because I "want" them to be useable for something, or because they are better for this

As honestly, they are crap for carving when used to a tad or a lot bigger wings IMO

If we leave out SUP foiling and wingfoiling and other sports, I think we will (most often) settle around the medium sizes now, and of course for some things the big ones might be used.

The small fast wings will probably be a niche only, apart from racers (smaller wing bigger kites) but that was not your question nor the topic.

What do others think and experience?

Ever since getting proficient on the foil my need for speed is growing. Finally last season got a sick used LP carbon foil with 2 wingset. Fast and ludicrous speed. I like to jump super high and have the least amount of drag possible when exiting the water. I also like as tall of a mast as possible.

Our conditions here are perfect for fast foiling. low rollers and even some decent swell is fine. lots of flatter water not alot of wind blown energy type waves.

I did however find on a trip to the gorge I met the wall of the fast foil and saw some light as to why the fatter foils are popular. First day was 50+mph on a 3 meter and although i managed to work it out it was not as much fun in that high of swell constantly stabbing the back of the peaks and dropping off foil usually resulting in a crash. riding the swell and running down the line is fine on a race foil, but that was also a big day. I did move into many other foils on that trip and would use the larger wings for bigger gorge swell. Fun factor was much better parking and riding the swell up and down the Columbia very different speed wise, but i can see why they are popular in specific conditions.

I also think learning on a bit faster foil is easier then the mega wings lift is not what you want when starting out. The big ones can rise instantly. somewhere in the middle is a better starting point IMO.

Jumping the fatter foils is much more tricky timing wise. I broke several hooks trying to put on to much leverage at the exit point I still got pretty high on them but the race foils you can easily double your height with the added speed alone. This picture I was trying out a lift 150 or maybe it was a 110 still way bigger then my LP. 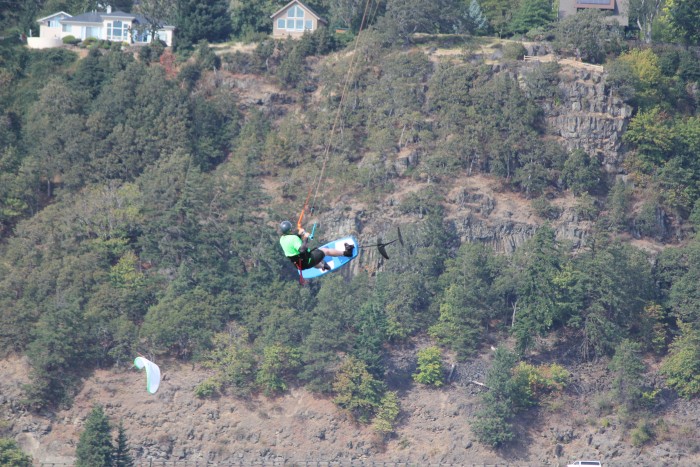 I think a fast foil and a surf foil is a wonderful combination that covers just about anything.
Last edited by Craz Z on Fri Jan 10, 2020 11:00 pm, edited 1 time in total.
Top

A thought, maybe it is important whether you ride strapped/hooks or strapless, regarding which wing sizes you prefer

Would not be without the fast slippery stuff, up wind, travelling etc and boosting cannot be beat.... and my race wing can also carve it up in the waves once you get the hang. That said, if you are going to have a bigger slower rig, go to an extreme....anything with slight overlap makes no point. Have a 1,000 or 1,200 and a race for example....although surface area is kind of arbitrary as so many other factors like shape, lift, profile, chord etc.
Top

Too much time online convinced me I needed a new foil: a surf foil for waves and fun. Bought one. Was a fun novelty but then I realized that I don’t have waves to ride and have more fun on faster foil. So back to my Stringfellow first-gen foil and I’m loving it. Can do flying tacks now finally with foil kite. Not a race foil but good all-rounder that I can ride fast with my foil kites in bay chop 90% of the time and carve on small LEI on rare days it’s blowing 25mph+ and actually some organized swell. Gotta let your local conditions dictate your gear and style or you’ll be disappointed.
Top

I mostly ride freerace wings, cause with a bigger kite you can have and adrenaline pumping session in 10-14kts winds.. lofty airs and big wipeouts should you catch some fish or garbage with your foil at speed.


Brand Affiliation: None
Has thanked: 56 times
Been thanked: 113 times

using fast wings that stall easily at lower speeds and are less responsive and more locked in to straight blasting are a pain when progressing, or trying to progress.
they held me back for sure, it was such a relief to get my first performance style wave wing, yes the 633.
it opened the door to actually enjoying my progression period, and later on, a year later on! i found it to be a very fast wing set,
holding it at 26 knts is flipping fast and hard to do for anyone
but now I am jumping all the time, and as mentioned above the timing is tricky on take off, and can tear your stomach muscles,
if using a big 633 style wing and take off badly with the kite lifting and the wing not quite released from the surface then your body's mid section acts like an elastic band and can twang your abdominal muscles quite badly, as I have found recently.
so I have cobbled together a faster higher aspect wing set, to see if it is better for jumping, I am already getting way enough hight from my 101 mast and 633 combination and landings are now sorted,
trying it out tomorrow before I head off to flag beach for a 5 week session,
I am leaning to the side of the guys who are finding the Moses style of fast wing rather good at both riding styles,
the new 720 is one of these wings,
I have tried it and it feels fast, with strong lift, very low stall speed, but you have to commit to its speed for ultimate stability, which was tiring for me and made me realise I was not as good as the wing,
but will be this year for sure, but the other new faster- big lift wings, may be a gap filler until then, if not it will be fun finding out

Another good thing about getting to Flag beach, Gunnar normally has all these wings down at the beach sometime in any given week.
Top

It seems like those riding with straps are the only ones (taken in general...) that use the small fast wings?

Early days we used these small faster ones 550 to 650 cm2 strapless, no issues when used to it.

Today these just feels wrong to me, strapless, its like you have to rig a different kitesize and also turn very different in the carves somehow, especially if on the low powered side.

So going up in size 650 cm2 and up for the average weight strapless rider seems the standard now somewhat, is my take on this.

Whereas with straps, definitely go smaller and faster, soooo much fun to blast along and jump, yes