an ultimate weapon for marginal wind ? 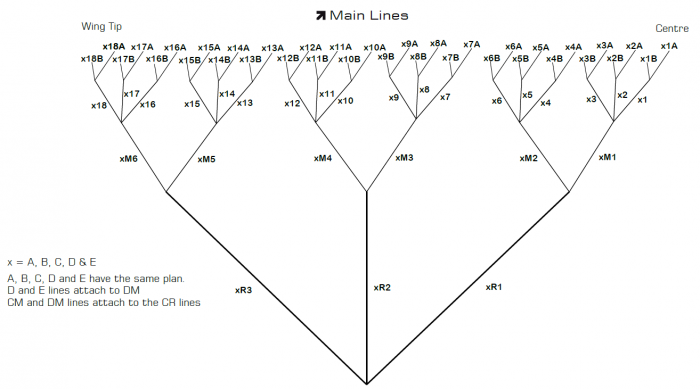 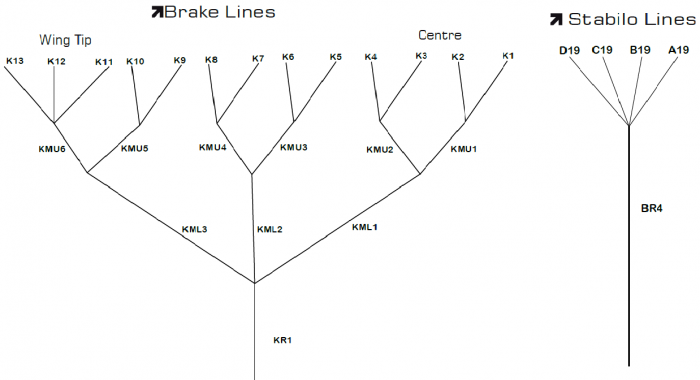 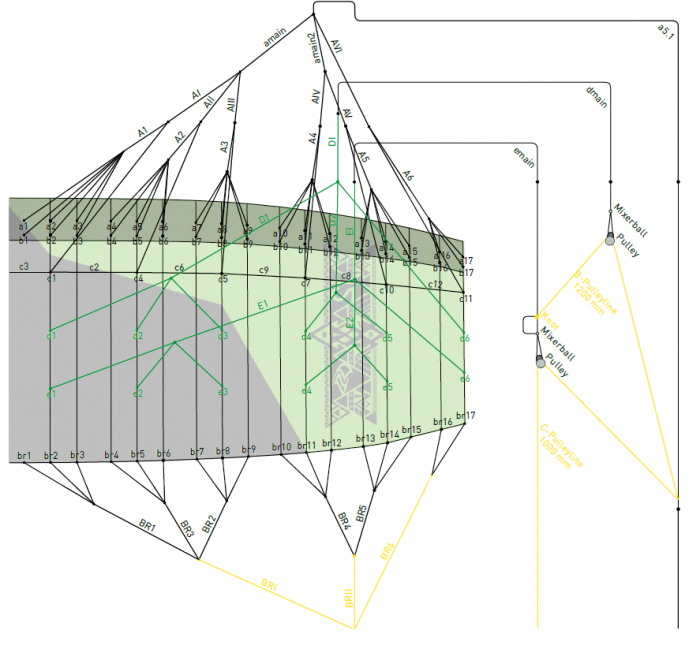 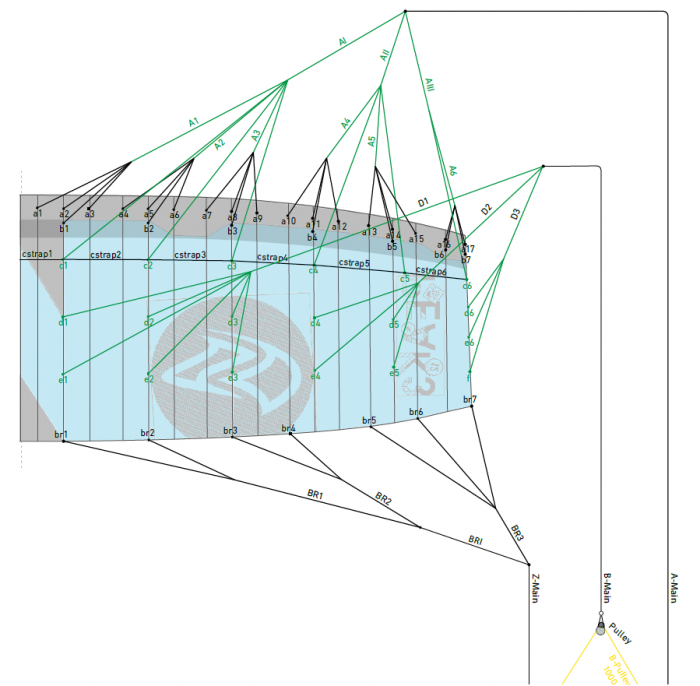 Interesting. I thought to include the Peak2 and 3 for some ideas.

First the xxlite has a lot of attachments!

Reading the first blurb it looks as if the row 1-2 are on 1 cascade, 2-3 on 1 cascade, 5-10 on 1 cascade and brakes or Z on 1 cascade. Tips are on their own thing.... I don't see this will work with a mixer without rearranging the bridles. At the very least you will have to bridle the tip to the others.

The tip you may want to fix the first 3 rows on to the A bridle, you will likely need to experiment with it.

The xxlite manual said it has aramid bridles. They don't last long in the sun.
Top

Impressive stability without working the kite in a wind where a Pulsion and peak would have been hard to keep in the air . Exactly what I was dreaming of

Amazing Regis, love how you explore the limits

So it seems you CAN loop it, but no advantage as no extreme power?

I have often experienced the same, that diving and flying a kite up again, gives more power than looping - hard to explain, but somehow in marginal winds you keep the kite "tensioned" and pointing towards the apparent wind in a better way.

Hi Foilholio,
Indeed the number of bridles is incredible ! And so thin that it is hard to see them...Which also tend to "calm down" my energy to modify them. As you can see there is only A, C and Z so my speed system has only one pulley. But actually A is divided in two rows , which are therefore fixed, like my ex peak v1 had to maintain the LE stable, and I think it is a good thing to prevent fronstalls when sheet-out.

I will try to modify as minimum as possible. Indeed the briddle design is coherent and optimized by Ozone in straight line (Z high) and i do not want to touch it. Only find the best way to launch the kite and make it turn without redoing too much briddles. Probably by just removing the central Z , and also set my mixer so that i obtain the original AoA of the XXLite when bar is fully sheet out, trim unpulled. And i suspect the "stabilo line" on the tips to be in detriment of turn if not slack, so I will look carrefully at this.

And maybe use a pulley bar later on.

Franck: thanks for encouragement. Indeed loop has almost no power (in very low wind). Just "8" figures seems a bit better indeed with this kite.

It is really suprising to drive such a light kite, strange feeling vs its power (look at how insignificantly it accelerate when Leading Edge is downward) , and it stays in the air in really strange orientations ...
Top

The wing has no support without the bridles. For example without the tip(stabilo) bridles it will just collapse that part of the wing. I don't think 1 pulley will work well. You will need to do quite a bit of bridle work to get it good. Depowering solely onto A won't leave enough support for the wing. You need at least 1 or both B as well. There is no need to use a pulley bar you can instead use a jackomixer.
Top


Ive done a bit of testing on some foil kites and best results have been 13m hyperlink v2 on 15m lines (i want to try 12's) (shorter lines keep kite in wind compression zone near cliffs for soaring) and im still yet to chop up the stupid mixer and directly connect the a b c and brakes ala paraglider riser control system instead of kite bar.

Kiteing on large foil kites on short lines sucks a bit due to the wing nearly touching water if i need to sine it up and down alot in light winds... But ill be soaring best in higher winds so hopefully when im free from work can get back to testing it in better conditions. Maybe ahwhile
Top

Interesting project Kozzie, opposite to mine !!!
Gathering AB and C on front line may complicate the launching if wind is a bit low, but you'll tell us !

Foilholio, jackomixer is an option or diablo turbo line, or malabar since i do not count on relaunch. What i dislike with jacko is the loss of camber when you sheet-in. This should lead to fronstall instabilities on a single skin when sheet out to keep the zenith in lulls. Just a guess ... oppositelly a turbo line like on F-one diablo v1 could be a benefit for zenith stability to be tested IMO.
Top

So the way the kite changes camber depends on 2 things the ratio of the mixer and the positions of the bridles or more particularly the position of bridles between A and Z. So to get a linear relationship, that is to say the camber changes not at all or "the least", you need the mixer ratio to match the bridle positions. So for 1 pulley 2:1 mixer B would need to be exactly in the middle of A and Z. For a 2 pulley 4:2:1 mixer B would need to be at 1/4 and C 1/2 between A and Z. For a 2 pulley 3:2:1 jakomixer B would need to be at 1/3 and C 2/3. So the principal for changing any of these is the camber increases or decreases. That is if we take the 1 pulley mixer at 2:1 and we place B forward of 1/2 the camber will decrease because the pull on B will increase beyond it's flat or linear ratio as the mixer is pulled more. If we place B past 1/2 then the opposite happens and so B is pulled less or Z could be looked to be pulled more.

Now there is a third effect that is with a camber increasing setup you can have a period where solely B or and C is pulled and so camber decreases and then reverses to increase. With this you have good stability depowered but then also good performance powered. Simple trick but worth exploiting if you can.

Now enter your kite. You have so many bridle attachment positions you can practically match it to any mixer however you want. The question is what do you desire and what would work best? So the advantage to a single pulley is you get a lot of travel for little bar, but the disadvantage is especially for a single skin you may not have enough bridle support with that. That is to say you are going to have a large portion of the kite supported at a single level. Fine if like on a paraglider everything is basically fixed and you can set all the levels to be right, but on a mixer where things move and change then maybe not the best. You will end up with a weird stepping effect on the airfoil. If you look at the Peak 3 you will see it has a sole row for B and C and Z, this avoids the stepping. Now you have a lot of bridle points and using 2 pulleys you are still going to have this effect but it is better than 1 pulley, you could go 3 or 4 pulleys but I don't think that is necessary. Were you to fix say row 1-4 as A that leaves you much less rows to deal with, now you have 2-3 rows per pulley, not ideal but I think it will work.

As to the play of camber on a single skin I think maybe you are over worrying this point. What is most important is you HAVE TO HAVE bridles to support the wing or it will collapse, which is what can be seen with yours in the vids... You can get away with only supporting part of the cord though. If we look at the peak 2 and 3 using my eyes and the diagram which neither may be accurate

we see that A supports about the first 1/4 or the cord. So if we look at your kite

that would be about row 1-3 INCLUDING those tip bridles. Me personally I might just fix all those tip bridles onto A. Now an interesting effect when you support the front of the cord and then completely unsupport the rest it will flap. Flapping increases drag. Increased drag means to kite sits back having more AOA and too has a much harder time flying forward especially if the wind changes. The net effect is you get very stable depower as seen on the peaks. So the important thing for stability I think is how much of the cord you fix to A or rows 1-3 or 1-4 and how much AOA you give those new A bridles, or what shape you set them to.

Now it has to be added I do not know what flysurfer is doing with B on the peak, it could still retain tension depowered. Which would change things a little. But you can likely take the same approach if need by just altering the mixer.

In addition there is some difference you will get with the different mixers that is unavoidable. To get a similar approach to camber change they will be supporting slightly different parts of the cord. This will come with benefits and negatives. It could be that the most evenly spread support is the best so the standard 4:2:1 where as the jackomixer leaning to more rear support is not as good... or maybe the reverse, as I have not tried any of this.

Good luck, but yes you need to fix that collapsing. Get the A bridle right and maybe it needs some of the centerish cord fix on B.

Oh and to add looking at the row positions of your kite in the diagram, they do not look accurate. You will have to calculate this on the kite. Use a measuring tape or fold the kite to estimate things. Make a plan, I think follow what the peak does, and execute it.

And lastly as I keep adding things

. I would love to help you person if I could( obviously can't) and I think it's a really cool project and how great if with relatively little change it works well! I wonder if Ozone or someone would release a kit to do similar.
Top

Happy ultimately being fired Foilholio !
Think of all the free time you have now 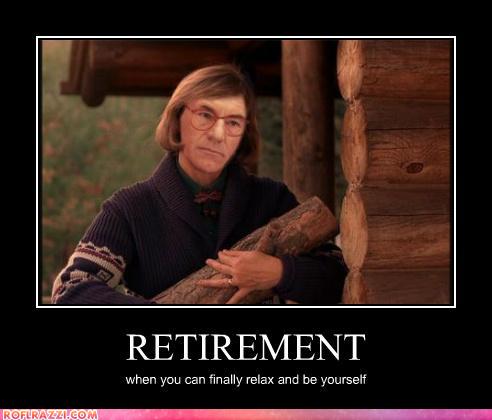