Recently I had to swim in for the first time in many, many years. I wasn't wearing a pfd or impact vest, kite was Marabou (not LEI), and the board was a SS 42" DC. So out of the three, only one thing could float me in (the board).

Do you choose your session gear based upon the possibility of having to float in? Either having an LEI kite, or pfd/impact vest, or a board with enough volume to float you?
Is anyone riding a Peak4 with a tray board, no pfd/impact vest?
Top

I switched from a no-volume (Kanaha Shapes) board to a moderate volume (DwarfCraft 3'6", but not "micro" version) along with switching to flying foil kites partly for this reason. With a foil kite and a Kanaha Shapes board, none of your gear floats.
Top

Since I started riding Peak4s in the ocean, I tend to favour my prone board Zeeko Scrambler (36L), and I wear an impact vest for extra flotation. And I pick my wetsuit accordingly, to allow for a long drift back to shore. When I'm riding in our closed estuary, I can use low or no volume boards, minimal wetsuit, although I tend to stick to the same gear, out of habit, and because it works great.

It's pretty easy to end up a good km or two out just to have a longer enjoyable downwind run in the swell. Of course I'm extra cautious in the transitions when that far, but there's always a risk of screw up, totally wrong kind of fall, board jumping into the lines... Shit happens. Even the other day, a flock of shags decided to fly up the coast, and one managed to hit one of my lines and caused a fair bit of unwanted steering that could well have sent the kite in the water.
Top

I don't go out any farther than I can swim in. But, uh... That's just common sense with any kite.
Top

^^^^ I never go out further than I am prepared to swim in.

I pick my location so that there is a landing place downwind. Some of those "landing" places are reefs so I wear booties if I feel there is a risk of ending up on the reef and needing to walk over sea urchins and rocks.

My board has ample flotation. I don't really understand the appeal of the zero buoyancy boards. I don't see anybody doing anything on those boards that I can't do on my board. On very light conditions I might grab my old 155cm learning board. It is so much fun to wander around this aircraft carrier in light conditions. It forgives all sorts of technical mistakes and the swing weight makes tacks and 360s really easy.

I always wear some kind of wetsuit. In cold weather a good wetsuit is a survival necessity. It provides buoyancy and reduces the risk of hypothermia. In hot weather it gives sun protection. Somewhat counterintuitively, a wetsuit is great for keeping you cool in very hot weather. It keeps the sun off your skin and holds a layer of cooler water next to your body. On 45C days I will keep my wetsuit on while I pack my gear. For hot weather I use a particularly cheap wetsuit I bought from Aldi. It's a crap wetsuit but it's a great sun suit. I wear booties on very hot days to stop my feet being burned by the sand.

Some years ago I settled on Switch LEI kites as my kite of choice. They're very good kites, but the real advantage is they are so cheap. In an emergency I would happily ditch the kite to focus on saving myself. Again, apart from the race foilers, I don't see anybody doing anything on a hydrofoil that I can't do (or make a decent attempt) with my kites.
Top

I feel like I need to explain a bit what I said above with being a couple of kms at the back, which is probably more that I can swim. But on the other hand, this is only done in onshore seabreezy conditions, and I'd expect to eventually drift in, even if not actively swimming. It would take a while for sure, and get pretty boring, but provided the wetsuit is fit for purpose, that I don't have to fight to stay afloat, there's practically no risk to life. Also, there's 20kms of beach to eventually reach, and it's not like I'd ever be really exposed the way you could be once you pass a headland downwind. All those factors come into play of the decision making/ risk assessment about how far is reasonable. On other spots, or with changeable winds, or limited exits and contingency plans, I'd be likely to keep my tacks shorter.
Top

Do you choose your session gear based upon the possibility of having to float in? Either having an LEI kite, or pfd/impact vest, or a board with enough volume to float you?
Is anyone riding a Peak4 with a tray board, no pfd/impact vest?

Hi Geokite.
Yes, I ride a Peak4 with a tray board and no pfd/impact vest. I do wear a wetsuit, short in summer and steamer in cooler months.

I have had a few swims over the years due to gear breakage and a couple of times with the Peak4. One of those times was due to another kiter hitting my lines bringing both of us down however. Whether a Peak4 or inflatable kite, something can fail such as line breakage, harness failure and I've even had my kite bar break in half.

Regardless of the reason for your swim, common sense should always apply. You should have reasonable swimming skills that will support you and even a tray board should have some flotation as will a wetsuit, so make sure you're not going to drown or become hypothermic if you're in the water for a while. So don't go further out than you're prepared to swim or drift back to shore.

You should of course not be kiting in an offshore wind if there's nothing but kms/miles of water downwind of you. With any offshore wind and gear failure the chances of getting back to shore unless you jettison your gear are slim. So don't do it unless you have guaranteed backup in the form of a rescue facility which keeps an eye on you.

With an onshore or cross onshore wind you will generally end up back on shore. Make sure you don't get hypothermia and as has been mentioned, if the downwind shore is rocky then boots will be needed. Be aware if you have gear failure or can't relaunch and you're a long way from shore, you may be thought of as missing and a search and rescue operation may begin. This can involve authorities who may take a dim view of your behaviour and therefore cast all kiters in a bad light bringing regulations which may reduce kite access to beaches etc. This is not a good outcome. Try and kite with others and you can all watch for each other and deal with any gear/relaunch failure. It's a lot easier and faster to get a mate to tow you back to shore when things go wrong.

As a Peak4 user be prepared to pack your kite down if you can't relaunch. Done carefully you can avoid tangles and it will pack down to a small bundle which won't hinder swimming in too much. Better still, practice relaunching your Peak4 in shallow water. With the correct technique and practice you can usually get your Peak4 back in the air quite quickly if you have wind.
Top

Do you choose your session gear based upon the possibility of having to float in? Either having an LEI kite, or pfd/impact vest, or a board with enough volume to float you?
Is anyone riding a Peak4 with a tray board, no pfd/impact vest?


You should of course not be kiting in an offshore wind if there's nothing but kms/miles of water downwind of you. With any off
As a Peak4 user be prepared to pack your kite down if you can't relaunch. Done carefully you can avoid tangles and it will pack down to a small bundle which won't hinder swimming in too much. Better still, practice relaunching your Peak4 in shallow water. With the correct technique and practice you can usually get your Peak4 back in the air quite quickly if you have wind.

I Would just like to add from recent experience, I lost my board downwind in a crash whilst using Peak4 5m in an area reasonably close to shore in an onshore wind which I am both comfortable and familiar with, I initially started a reverse launch but messed it and kite rolled , so I did a self pack down and swim in for the first time without my board as flotation, all I can say now is it's not an experience I wish to repeat. That experience affected my comfortable relaxed way of foiling and probably caused (as I was not relaxed), yet another crash and failed relaunch in the same session, even with my board to assist. In summary I sold my Peak4's and went back to LEI's for foiling.
I used Peak4's for 6 months of foiling and I loved them even if I did have the occasional swim in, so yes they are brilliant for lightness, drift, and quick setup & packdown, but be prepared for when it goes 'pear shaped'!
Top

I wear a full wetsuit, helmet, and 50N pfd with emergency marine flashing light I can turn on. I'd never go out without this gear. I even wear the this gear without the wetsuit foiling in Brazil.
I had an incident 2 years ago using my LEI kite. Long story short, in side shore conditions,
4c water, 6mm wetsuit, I was close to drowning/ hypothermia 300m from the shore. A fellow kiter dragged me in.
Now I'm using foil kites, and in a similar situation without pfd, I would have drowned.
You can lose your board, you can get tangled in your lines, you can lose your kite.
Don't over estimate your ability to swim, especially in cold water and a thick wetsuit.
Top

In addition to the previous comments and advice above, I always carry a small distress flare gun (3 cartridges) in the side of my harness. Even if you are just 500m offshore and get into difficulty (kite down) people can not always see you from the shore. Swimming in with an onshore wind should normally be possible, but you never know! For a price £45 I think this mini-flare device is a good backup to have with you at all times if foiling alone. 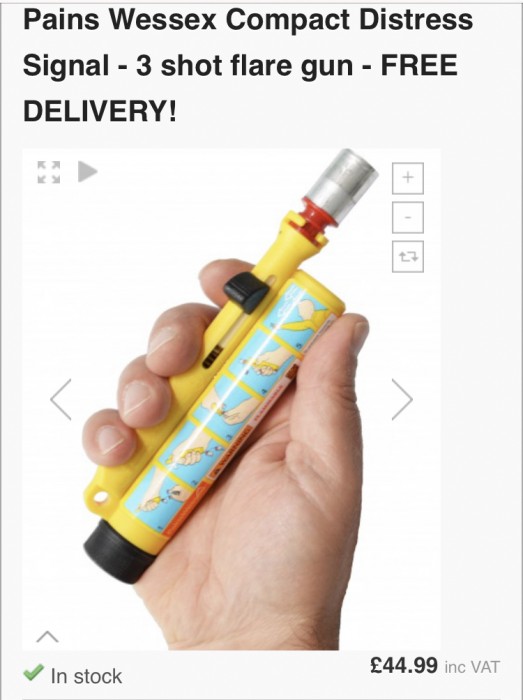