I thought the spitfire was essentially the Ocean rodeo mako of the foil world. A different take on the same thing but essentially a niche.

I could be wrong but I'm sure the general opinion was that you didn't get the same range of operating speed out of the design in comparison to the best foils of the traditional design. So the really big wing that beginners like to start with gets overpowered quicker and the smallest wings will cruise nicely at speed but have a higher stall speed. I think they are also a little more pitch sensitive too.
Top

jumptheshark wrote: ↑
Mon Jul 06, 2020 1:27 pm
It had a few odd little plastic spacers when assembled normally. They allowed for clearance of the main wing to be mounted in reverse and the stab to be mounted with the proper angle also in reverse so the foil could essentially by assembled as a canard.

Not likely quite that simple, but I'm pretty sure the original zeeko alloy foil could be assembled as a working canard. The only purpose I can see for the little spacer that fit behind the main wing was to allow the same wing to mount in reverse. It precisely matches the distance needed for the leading edge of the wing when the mounting holes matched up. When they eliminated that, it no longer allowed the main wing to fit reversed. Same with the spacer that mounts between the stabilizer and the fuse. It has a particular angle that only makes any sense when you mount the stab to the underside of the fuse with the profile facing up (lifting) where it matches the inclination angle of the spitfire's front mounted stab. Again, a piece they eliminated in the second generation.
Top

Anyway, i will try to assemble. I have LF Thruster foil set laying around, on old straight fuse its no problem to turn it around, problem could be with stabilizer wing.
Top

The front wing is slightly angled upward on the spitfire. You may need to shim your reversed and flipped stabilizer to angle upward.

Like many early convenional hydrofoil builds. Almost anything "CAN" be flown, but only refined well balanced designs fly well.
Top

lederhosen wrote: Maybe they have changed the base plate at some point, but if you want to use it on other boards just give it a try, it might fit. I took a picture of mine.

flying doctor wrote: ↑
Mon Jul 06, 2020 12:30 pm
My biggest problem at the moment is that the baseplate has a 160x85mm spacing. If I want to buy another board (and I think I'm ready for something shorter and lighter than my pocket air) they all seem to have 90mm tracks.

So I guess I'm caught in the Zeeko eco-system?

The spitfire baseplate is standard size, I have used it on both Liquidforce tracks and the Crazyfly Flite screw connection without problem.

That's interesting, have you measured your base plate?

I honestly haven't tried to pair it to any other board, I bought mine with the zeeko pocket air. As you can see from the info the spacing is 85mm and not 90mm. I assume this just won't fit regular tracks but I may be wrong..
Zeeko has a base plate of 90mm on sale but on their site it says it's not compatible with the spitfire.


The Spitfire base plate has a slight angle built in to it to angle the mast. This is why the standard base plates are not compatible with the Spitfire.

The Spitfire base plates will fit both the 85mm and the 90mm spacing. Notice the wide, weird shaped slots on the base plate. I have been using it on a board with fixed 90mm spacing and currently on a Slingshot 4'6" DwarfCraft. It fits.

Found Onofoil's website www.onofoil.com but no mention of their canard design.
Top

nothing2seehere wrote: ↑
Tue Jul 07, 2020 9:49 am
you didn't get the same range of operating speed out of the design in comparison to the best foils of the traditional design.

I think it was similar to the other foils with flat CNC G10 wings I have ridden in terms of range e.g. Stringy and LF. Stall speed was a little higher than a similar sized carbon foil. Drag was felt a little more but not a limit to fun. Top speed on easy cruising a little less.

I think the biggest limit is development compared to the refinement and number of wing combinations compared to say Moses Lift or Ketos. I bet the performance would be similar with a better mast profile and a better shaped wing.

My favorite thing about it was less likely to kick it as a beginner.

IIRC with XL wings it was pitch stable and really maneuverable in roll and yaw. I think that may be the relatively low aspect wing and totally flat wing and stab. I did not experience a big front foot rear foot difference on turning to a traditional design.

I found it was sensitive to accidental ventilation of the canard, resulting in hard crashes if riding high and careless through chop or on a wave.

It’s a fine foil to get started and I would pick one up if the price was right but would not seek one out over a different Alu G10 foil. I did find it fun to ride but could not be bothered with it since riding my current setup.
Top

Ive dissed the spitfire pretty harshly on this forum. I found the standard wings ridiculously difficult to ride and the XL wing set was better but roll stability was still an issue. I havnt given up on it though and I got another one. Im not bored with the moses 720 but Im looking for yet more speed and less front foot pressure and I still believe in my mind that the spitfire is the way to go. I just need sufficient wind for the standard wings and take another severe beating trying to ride and learn it once more....it would be nice to have some anhedral in the spitfire wings like the ono to help with roll stability but I imagine that would detract from the quick turning ability....I think the flat wings make it twitchy in crappy winds...
Top 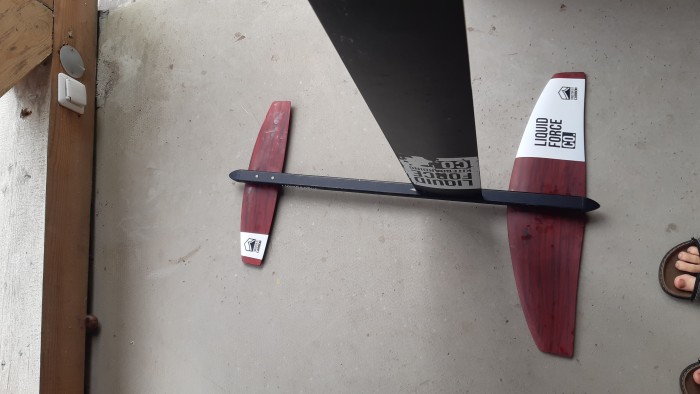