I'd like to invite racers for the Polish Cup event in Kołobrzeg 7-9th August 2020.
The event:
https://www.facebook.com/KolobrzegKiteChallenge

Kołobrzeg is a 3 hour drive from Berlin by new opened motorway.
From Denmark around 7-8 hour trip. 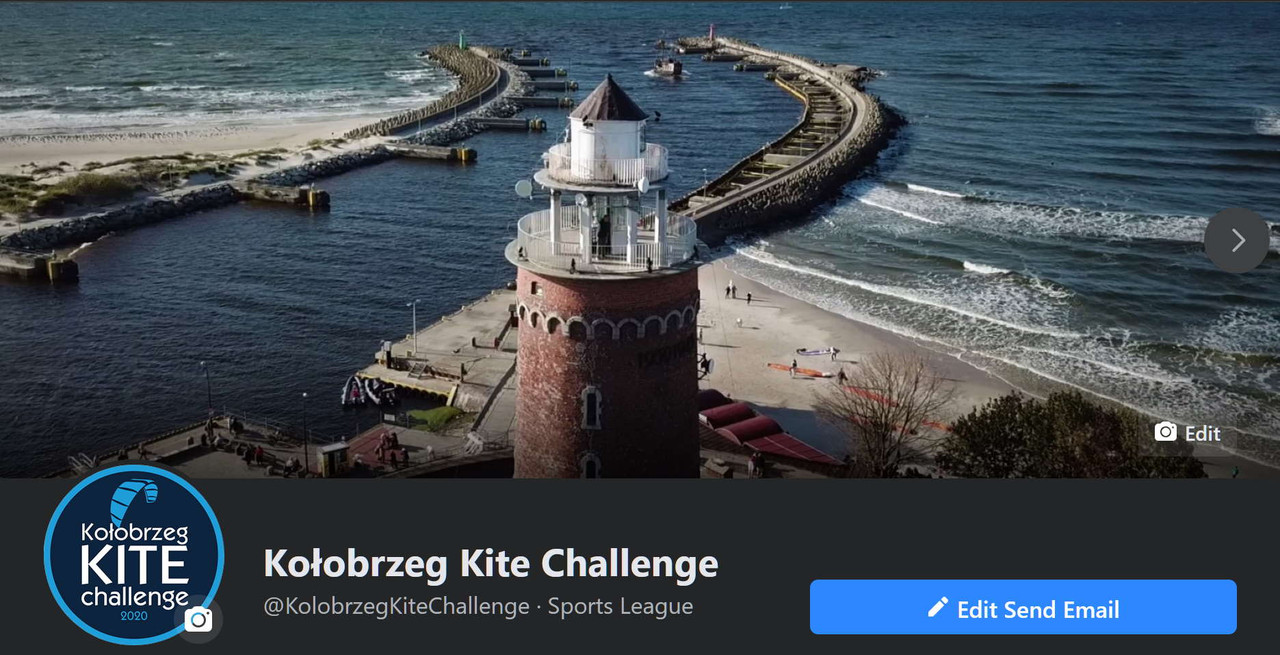 Wish to invite racers to Kołobrzeg, Poland in 18-20th June for Kołobrzeg Kite Challenge 2021 as Polish Cup event in Formula Kite (Open), A's Youth Class and Wingfoil (race, possible wave and 3style).
We were honoured by foreign riders too: Alina Kornelli, Mark Shinn and Ivan Doronin last year and I believe they had a good time.

Kołobrzeg has excellent road connection with Germany (only 3 hours drive from Berlin).
For those missing cancelled events in May and June in Europe it might be a good option to race with the best Polish riders too.
You are more than welcome!

sorry. negative. how may I help you then?
Top

Ah. That's too bad. I wanted to forward this to a few friends to get them the details.
Top


Hoping you are youtuber anyway

I uploaded the video with description in Polish which google translated:

As part of the Kołobrzeg Kite Challlenge, on 7-9 August 2020, on the central beach in Kołobrzeg by the lighthouse, kitesurfing competitions in the Polish Formula Kite Cup rank were held.
The weather was perfect. 16 races were held with 14 competitors from Poland and abroad. Tourists and residents of Kołobrzeg had the opportunity to watch spectacular games on the water between the leaders of Polish kiteracing and players from Germany, Great Britain and Russia. The colorful boats moving at unprecedented speed in sailing were clearly visible from the port to the Stone Lair. The start and finish were located at the pier, from where the competition was admired by the most people. Kitesurfer races have become the main attraction for sunbathers on these hot days.

Julia Damasiewicz won in the ladies category. The second place went to Alina Kornelli (Germany) and the third to Julka Morkowska. The podium among men is Maksymilian Żakowski, Błażej Ożóg and Kuba Jurkowski. Winners in the junior category (under 19) were also selected: Jakub Jurkowski, Kuba Wątorowski and Jasiek Koszowski, in the younger junior category (under 16): Jasiek Koszowski, Jakub Balewicz and Oskar Zawadowicz. Whereas the masters category (over 35 years old) is Marek Rowiński, Ivan Doronin (Russia) and Mark Shinn (Great Britain). The domination of talented young players is a good signal for Polish sailing, because this class will make its debut during the Olympic Games in Paris in 2024.

The director of the competition, Adam Szymański, emphasized that it was an efficient and safe competition, which influenced the level of sports competition on the water. The belaying was provided by 4 RIB boats, and the judges had the Spinio ship at their disposal. Such professional security was possible thanks to the support of Marcin Koc from mksailing.pl, Bogdan and Łukasz Jałoszyński, Albert Jurkowski (Kite Race Team) and Paweł Żakowski. Marcin Koc not only took care of the coordination of the sports part, but also funded a surprise prize drawn among the competitors in the form of a motorboat helmsman course.

It is worth noting that positive emotions were also visible on the beach in the Active Kołobrzeg Kite Challenge zone dedicated to fans and sunbathers. There were fun, games, competitions, and learning to swim on SUP boards, which perfectly complemented the competitions during breaks between races. The organizers did not forget about beach-goers with pets. For them, VetExpert prepared a booth with delicacies and entertained them with games. The kite regatta turned out to be an interesting spectacle for all sunbathers. During the competition under the lighthouse, on a large screen, the organizers promoted water activities in Kołobrzeg and Western Pomerania, as well as sponsors VetExpert and Burco Development Polska Rogowo Pearl.

Kołobrzeg Kite Challenge has shown that it is worth organizing regattas of all sailing classes at the international level on the Kołobrzeg sea amphitheater (port, promenade, pier).
The organizers received thanks from the competitors for the efficiently organized regatta and were positively received by tourists. At the closing ceremony, declarations were made of Ms Anna Bańkowska and Ms Marta Ostapiec to continue this successful competition in the coming years. The kindness of all Kołobrzeg residents involved in the preparation of this regatta was also emphasized (Kołobrzeg Seaport Captain Capt. Jan Świtlicki, Kołobrzeg Seaport President Artur Lijewski, Yacht Port Manager Artur Robaczyński, MOSiR Director Jacek Banasiak, Marek Łoś Regional Cultural Center, Marcin Koc mksailing.pl, SAR rescuers Bartek Krawczyński, Marcin Koc, Sebastian Stępień, Maciej Deręgowski, the cast of Spinio Małgorzata, Bogdan and Łukasz Jałoszyński, Natalia Pietrasz, cinematography Marek Łoś and Robert Gauer).
We invite everyone next year.

Formula Kite (Open) means that it is only available with Formula Class kites and foils? Listed
Top

adrenalineendorphin wrote: ↑
Fri Apr 30, 2021 11:01 am
Formula Kite (Open) means that it is only available with Formula Class kites and foils?

adrenalineendorphin wrote: ↑
Fri Apr 30, 2021 11:01 am
Formula Kite (Open) means that it is only available with Formula Class kites and foils?

Great, thanks for the info. If COVID rules will allow I'll drive from Hungary to the race. When should we register?
Top

adrenalineendorphin wrote: ↑
Fri Apr 30, 2021 8:11 pm
Great, thanks for the info. If COVID rules will allow I'll drive from Hungary to the race. When should we register?

Great news! You do registration on the spot on the first day of the comp at 0900.
We managed to race last year so I hope the covid won't stop us this year either however contact me a week before the event to confirm it.

All riders willing to come - please report on my email:bracuru@gmail.com

This is a live camera near the lighthouse:
https://www.gawex.pl/kamery/id/27/Port- ... -morska-HD
Top
Post Reply
14 posts

Users browsing this forum: No registered users and 36 guests