What are little (Carbon) foils made of?

What are little (Carbon) foils made of?

Saw above post and wanted to talk about “carbon foils”
It seems that core is foam, wood at best, wrapped in glass with a layer of carbon on outside.
Some will say that carbon outside is only to falsely advertise setup as “carbon”.
Some will say the outer layer provides most of rigidity and filling doesn’t matter as much.

I guess the real question is - how thick is carbon layer and which manufacturers add carbon for looks and which are using it for stiffness and true strength? 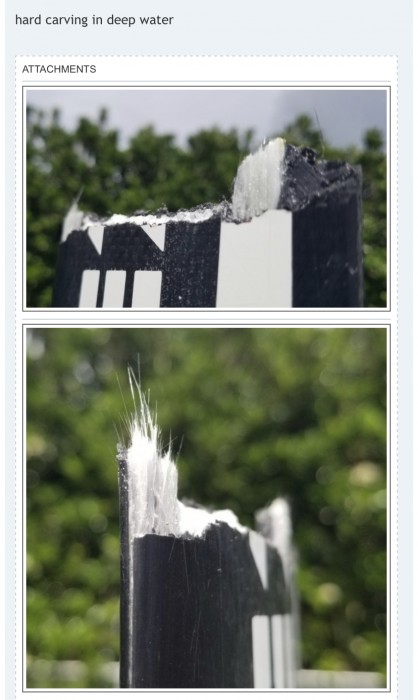 It looks like that one only has a token layer of carbon.

You should send a love note to the marketing guys.

Which product is that?

It looks like the entire core is glass with a bunch of filler under the leading edge?

Ok, i see from the other thread that this is an older product. I'm surprised they didn't have many more failures. Yet the thing could have been much lighter And much stronger, if they had decided to spend a bit on the material budget.

I wonder what they use now? Same thing?

If it's Moses, I have been under the impression that this was a premium product with a premium price.
Top

grigorib wrote: ↑
Fri Jul 24, 2020 10:21 pm
I guess the real question is - how thick is carbon layer and which manufacturers add carbon for looks and which are using it for stiffness and true strength?

You can make a carbon mast as strong as aluminum and mostly as stiff ... but you won't save any weight and it'll be expensive because it's solid carbon.

The advantages are you can tune the outline and profile, vary it along the whole length of the mast.
Top


Brand Affiliation: None
Has thanked: 205 times
Been thanked: 287 times

I like carbon look - it’s pretty. I don’t mind foam core - I know that’s center doesn’t affect stiffness; bending and rotational strength as much as outer layer - I did quite well at my materials’ strength class to know that.
Yet I don’t appreciate thin outside layer just for looks yet strength is delivered by damn heavy glass all over the foam. That’s BS

What’s next - painting glass black so it looks like carbon it spraying carbon scraps like they make boats?
Top


Brand Affiliation: None
Has thanked: 86 times
Been thanked: 184 times

i do worry at times about the strength of my carbon parts, but up to date, more than 3 years now I have never witnessed or know anyone personally who has bust apart any of the moses carbon kit, and nearly all the foilers who have progressed beyond the novice level are now using Moses carbon foils, and moses carbon masts.

My foiling buddy who a few weeks back was on his 101 mast and moses race wings 637 set up was going full speed over 30knts across our local new brighton bay area, he hit a solid sand bar and was smashed into the water, the impact was huge and from the sound of the kit hitting so hard he feared the worst as he collected in his kit far behind him, he was worried that some bad damage had been done and was surprised to see his wings were still attached and still had a one piece mast attached to his board, the hit was so solid at high speed and both feet locked down in straps,
he got back ashore and took everything apart to inspect all parts for damage/cracks /anything that was not as it should be, and he found one part that was toast, not anything Moses had made, it was one of the steel screws securing the wing to the fuse, it was bent good and proper, but everything else was fine,
take a look at the photo below at the actual screw, and imagine how much force was needed to bend such a short stainless steel screw.

To add to this myself, only 2 days ago out on my Moses foam core 633 wing and my foam core 2 year old Moses 101 mast,
the wind was high, the swell was playing, and I was powered up on my 7mtr foil kite, and then for some reason, still unknown to me, I totally messed up a very high jump losing all lift from the kite,I was high up and dropped like a house brick, and yikes! hitting the water dead flat on the wing, it made a very loud impact noise, and as i sunk below the surface I feared the worse, and turned my board over to inspect the damage I was expecting to see, but nothing at all wrong, wow! but the shock of that crash landing made me behave myself for a bit,just thinking about the impact sent shivers down my spine for a while, and back at home I took my board into my garage to check for any cracks or damage around the track area, but all good. 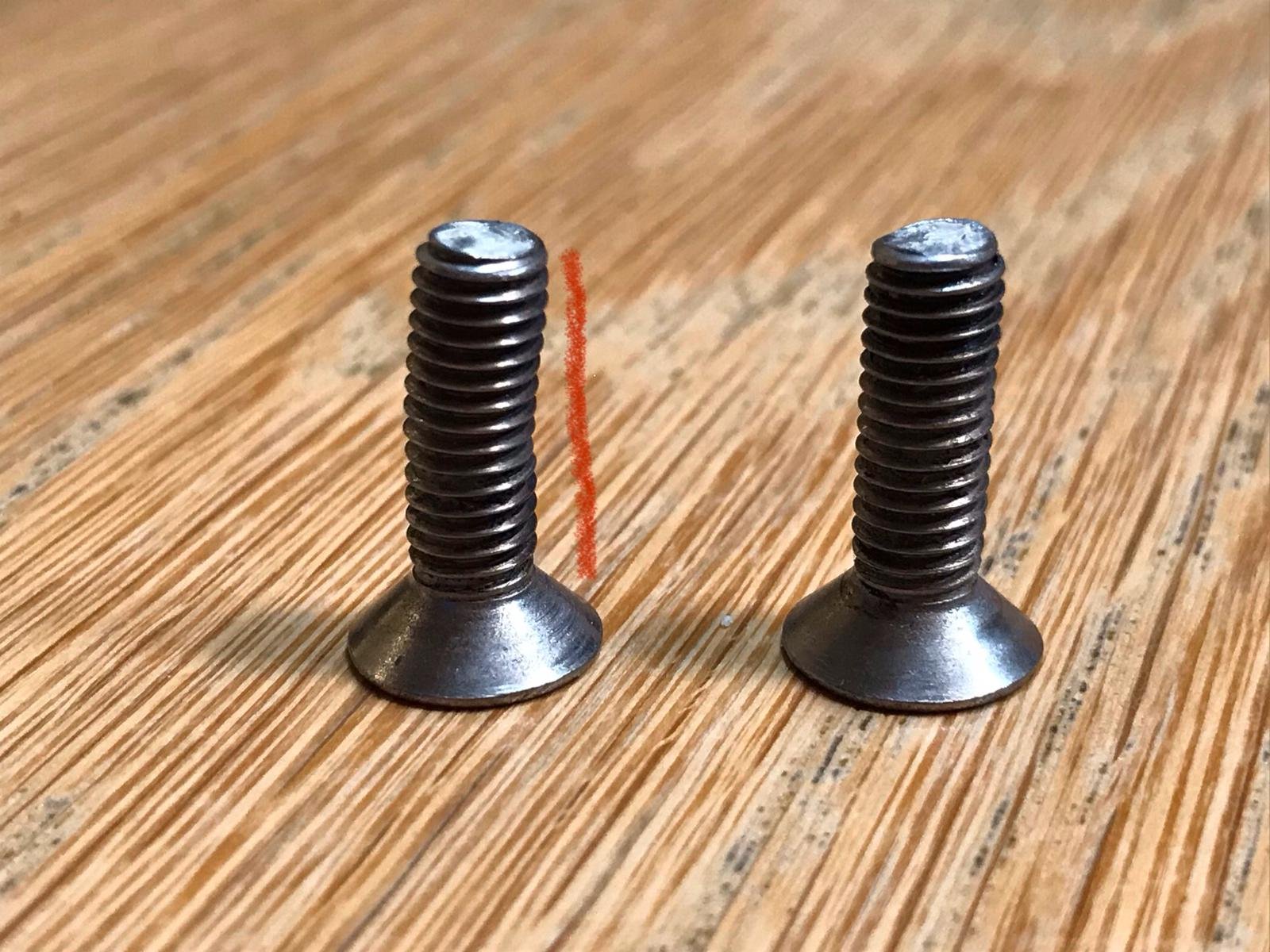 
Brand Affiliation: None
Has thanked: 205 times
Been thanked: 287 times

I’d expect wings to have less or none of glass under carbon, yet I heard stories about “carbon” wings which are made otherwise.
Top

This is sort of accepted in the sport industries. Ive had discussions with snowboard brands marketing boards as carbon when it was just a carbon layer for show. The complete layup was similar to a board half the price, and the carbon board was heavier. They claimed it had a performance benefit, it didn't it was worse than the glass board.
Other brands spend years perfecting a full carbon construction, so its not a fair game imo.

The truth is carbon uni is hard to work with. The layup is more difficult, and its easy to get dry spots unless you know what you're doing or you use vacuum infusion. Its harder to sand and shape. It doesnt give a huge weight benefit depending on the part, especially because its not very impact resistant by itself on a foam core. The layers you see for show are not woven in a way that make them optimal for mechanical stiffness, but they are easier to work with than triax for instance, and look good.

They should stop the marketing bs and just bring the prices down. That's just my opinion.
Top

All carbon laminates that are applied in correct fashion add stiffness and strength. It's just a matter of how much. Its always a balance of cost/ benefit.
A core of foam and wood is better than solid carbon. You have to have a sandwich, carbon right in the middle is low cost/ benefit/ weight advantage.
The 4 moses wings I owned and used were rather fragile in regards to knocking against rocks while dragging out. I had to repair them often. But it was manageable.
Gong wings I have (2) are heavier, but considerably more robust. They have thicker laminate, and its published on their site exactly what the laminate is and how its applied and what core they have. Thier carbon mast laminate schedule is not published. I don't see any other company publishing wing laminate schedule.
Top

Carbon , "IS" the $H!T , when done correctly ; screw up the lay-Up
and you got a worthless, expensive part that, only looks Cool.

Moses is made in Italy.

Says everything about the quality and all about the look and style.

Look and style sells. Even CrayFly has one single layer on most expensive TT. No wonder it broke.
Top
Post Reply
15 posts