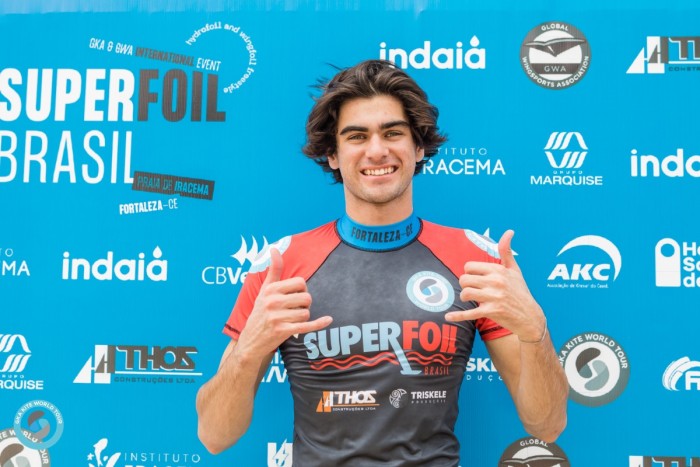 Today was finals day here at the SuperFoil Brazil event. Our athletes have battled hard the last three days, to get their place in the Finals and Mini finals. We’ve seen some incredible action on the water and in the air too, the last Rounds of the competition were just as thrilling

In the mini finals Titouan and Maxime battled for the third place podium finish. The heat was exciting to watch as both riders put on a spectacular show for our crew. Maxime managed to squeeze a handle pass in during the last 30 second of the heat. Maxime took the win with a score of 23.00 to Titouan’s 19’17 points.

The finals was an exciting heat to watch with both riders really giving it their all. Charles’ riding was not as smooth as he had been in previous heats and Fred managed to complete an Around the World, despite the pressure of being in competition finals. A risky trick to try during a competition. It was an extremely tight heat, with both riders scoring high numbers. It came down to just one point between first and second position. Fred claimed the win, it was well deserved, as was Charles’ 2nd place.

Congratulations to Fred Hope for winning the first ever GKA Hydrofoil Freestyle Champion title, and congratulations to Charles Brodel. Who rode with great variety and skill throughout the competition. We are sure we will be seeing a lot more of these two athletes in the future, and they are both set to become pioneers of the discipline.

The GKA team would also like to extend congratulations to each rider that has taken part in the Hydrofoil Freestyle Championship. It’s been a pleasure to have them take part. With Kite Hydrofoil Freestyle being such a new sport, there is so much opportunity for them ahead in the future. The event is far from over here in Fortaleza, we have another action packed day coming up, get ready four Day for of SuperFoil Brazil 2020.
Top

I would love to see some footage..
All the freestyle heroes in one place, Fred Hope, Charles Brodel, Loic Brismontier..

Brand Affiliation: None
Has thanked: 61 times
Been thanked: 38 times