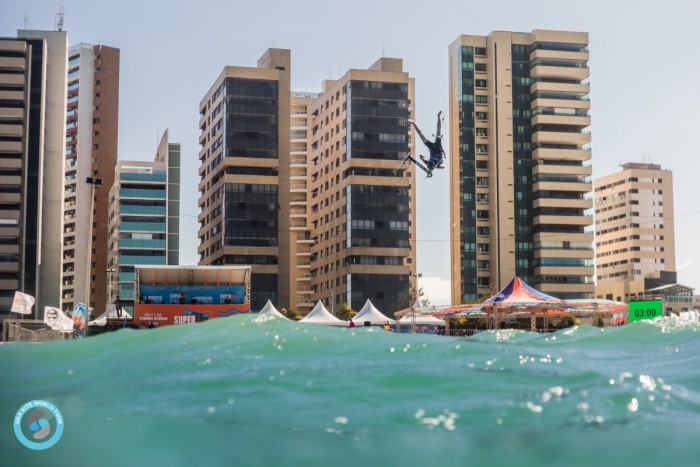 After so many months without competitions it’s been so good to get an international group of athletes together and back on to the water, and what a spot we have chosen for it! Fortaleza has surprised us all, and has certainly delivered the conditions needed for a Hydrofoil Freestyle event!

Today we held the first ever GKA Hydrofoil Super Session in Brazil, with just one round in which to choose the winner. We had the feeling we would see some very different styles on the water and we were right. Nicolas March Paniza, Loic Brismontier, Perdo Vianna Silva, Charles Brodel and Maxime Chabloz were the riders demonstrating their skills in the Super Session, and each one had the chance to express their passion for the sport in areas they excel in.

Our verteran rider Nicolas put on a great performance with a front roll Tick Tack, and he impressed the judges with consistently smooth riding. Maxime comes from a Freestyle background and landed a double handle-pass in the finals which is an impressive feat, and the first time our judges have seen one landed with a Hydrofoil board. Charles rode with poise, perfect entry and perfect exit to his tricks, his board never touching the water. He’s certainly a skilled and technical rider. Maxime had impressive landings, but the speed which Charles controlled while coming in and out of tricks like double inverted board-offs gave Charles the lead and the win.

A heartfelt thank you to our event partner SuperFoil Brazil, and their awesome team for organising such an incredible event. It feels great to get the team and athletes together again after such a difficult year, and what a location to do it! Everyone who came now has a special place for Fortaleza and Praia de Iracema in their hearts. Another thank you to all our athletes and GKA crew for making the event such a joyful place to be.

Tune in next week for more action from the GKA and our Freestyle Riders at the SuperKite Brazil event in Ilha do Guajiru, where will will have livestream coverage for the whole event.
Top

Is there a site where we can see some of these moves on a video?
Top

Thanks. Same problem as KOTA mixing strapless and strapped riders, except this time the strapless dude won. Love his slack line 360.
Top