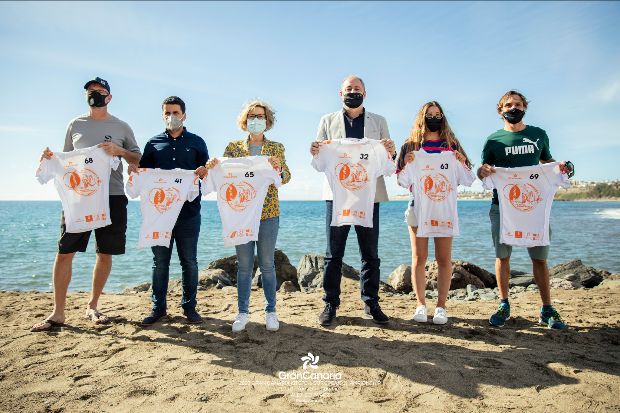 
Ending the most difficult year of international sports on a high, all signs are pointing to an amazing event coming up here in the Canary Islands over the coming days. COVID-19 has made it very difficult for the global community, and international competition has not been exempt. Huge efforts have been made by event organisers, local and federal governments, class organisers and competitors, demonstrating a huge display of co-operative strength and community in order to continue to run events in these difficult times.

Compounding on the achievement of simply being able to run an event, this particular competition represents a number of great milestones, as Markus Schwendtner, Class Manager of the IKA said in the opening press conference this morning; “This will be the first event since the International Olympic Committee formally announced that kiteboarding will be included in the Paris 2024 Olympic Games.”

The press conference was attended by a wide representation from the local Spanish authorities, proving that arranging this event was a real team effort.

The press conference was attended by a wide representation from the local Spanish authorities, including Concepción Narváez Vega and Samuel Henríquez Quintana, Mayor and Sports Councillor of the Municipal Council of San Bartolomé de Tirajana, and also Francisco Castellano Ortiz, Sports Councillor of the Cabildo de Gran Canaria, who each delivered their own address attributing the successful organisation of this event to co-operation and team work from all parties, and thanking the riders and sponsors for making it happen.

“This event was really difficult to arrange due to the COVID-19 situation, as well as budget issues etc. but in the end, we have to thank the riders for committing! We have nearly 60 riders and we are really happy that we can succeed because it was not something we were expecting, but only in the last three weeks of the month we managed to organise it all! So with help from the Spanish and Regional Sailing Federation, together with my sailing club, and the various government bodies, in a short time we have been able to put together this event and it is all looking very positive!” said Manuel “Nolo” Martínez Tavío, President of the Club CanaKite Experiences, one of the key event organisers for this competition and also present at the press conference.

Additionally, local kiting legend and organising liaison Gunnar Biniasch pointed out that “It is the very first kitefoil event here on the Canary Islands and the first proper European Championships hosted in Spain [for the class].”

Everybody is thrilled to escape the cold of European winter to the warmth of the Canary Islands.

Approximately 60 competitors from 15 nations hit the water this afternoon to get some practice in, despite light winds causing the scheduled practice race to be cancelled, with four days of high-octane racing kicking off tomorrow. The conditions are certainly amenable considering that almost all the competitors and organisers are more used to mainland Europe conditions, typically with single digit temperatures and grey skies. Temperatures here however, consistently remain above 25° C and the trade winds are almost always reliable, although having been on the ground helping prepare the event, Class Manager Markus noted “Yesterday we had North East wind of 20 knots, which is normal, but the two days previous we had wind from the South, from zero to 12 knots, so hopefully the weather system has been reset already and we should have good conditions moving forward.”

As with every sailing event and location, there are many different forecasting models each favoured by different crowds, and weather forecasting itself is somewhat of a dark art; “We either have the thermal wind or the normal gradient winds, between 10 and 20 knots every day.” Said Gunnar, a long-time Canary Island kiteboarding stalwart.

“I think the biggest factor facing the competitors will be deciding which size kite to use, especially tomorrow where the wind will start fairly light in the morning, but it will build fairly strongly in the afternoon; we might be getting gusts up to 30 knots tomorrow. So choosing the right kite size, and when to change over and what line lengths to use will be interesting to watch, as well as how people will cope with the choppy water, because it will get pretty bumpy tomorrow morning!” Gunnar said, echoing the thoughts of everyone at this event, or following online around the world; the stage is set, all eyes are looking this way, and this event is looking like it will be a great way to finish off the year for all.
Top
Post Reply
1 post • Page 1 of 1