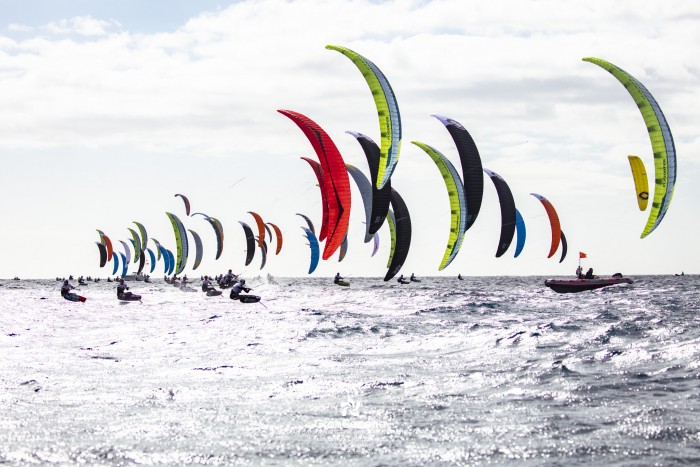 Today was certainly filled with excitement here at the final event of the kiteboarding calendar, with the action starting even before the first warning signal, the strong winds combined with a launching area in the lee of the peninsula causing a stressful environment as riders struggled to launch and get out to the clear winds. This caused a slight delay in the start, with the first race getting away with a clear start 20 mins behind schedule, at 1120 local time.

A delayed start, however, is still better than no start, and all competitors are thrilled to have the opportunity to race at all. The global pandemic has been the focus of the world's attention all year now, but in times like these, continuing to have and hold sporting events is more critical than ever.

“It is super important that we are still able to get out here and race in these tough times. As long as we keep safe and responsible we should keep moving forward.” stated the sole American entry, Markus Edegran (USA). “I think that seeing close to 60 competitors out here in 2020, it is a great sign moving forward and things should get easier and easier so next year should be a great year with an even bigger turnout than we’ve had in previous years.”

With the forecast predicting close to 30 knots of wind for today, and looking likely to be the windiest day of racing, it presented a strategic puzzle to the entrants, with there being two distinct trains of thought in the rigging area. Some competitors planned to go all out today, hoping to secure an early lead, but at the risk of tiring early and/or damaging equipment. Other competitors seemed to be taking a more conservative approach, taking fewer risks today, and thus conserving their energy for the coming days, and reducing the risk of equipment damage and injury.

In weather conditions like today, the risk of injury is relatively high, with competitors regularly reaching speeds upwards of 40 knots, riding on boards with large, blade-like foils carving through the water. The choppy waves also increase the percentage of risk, as it raises the chance that a foil will break the surface of the water, causing ventilation which could cause a rider to lose control and crash into the water, which at these high speeds, feels like hitting a solid surface.

However these are the most elite athletes in the world, with huge experience in all conditions, and the sport has strict rules to increase rider safety, which means that the racing here in Gran Canaria is a masterful display of exhilarating skill and breath-taking expertise.

Indeed the spectators lined the shore of Playa de las Burras to watch the racing intently, with the first race getting away with two sailors opting for a port tack start, one of the most high-risk and high-reward manoeuvres in the sailing world. A clean race unfolded, with the leaders Theo de Ramecourt (FRA), Maxime Nocher (FRA), and Guy Bridge (GBR) pulling away from the pack to open a big lead from the rest.

The second race saw no port tack starters, with all competitors opting to start on starboard, and with nobody breaking the startline early, the Race Officer Michal Jodlowski commented it was the best start he had seen in his long history of working with the kiteboarding class around the world.

The morning session of three races were held in 20+ knots and they all belonged to Theo de Ramecourt, who was on fire. The only time he felt the pressure was on the second downwind leg when his kite folded for a moment, surrendering the lead to Maxime Nocher (FRA) briefly, before Theo sorted his kite out, lit the afterburners and charged back into the lead.

Despite his face being completely painted white in sunscreen, it was easy to see the huge grin breaking through as he came back ashore for the scheduled break. Flying his 11m kite, he commented "We have perfect conditions today, it is so great. My kite is perfect for the wind, and the board is perfect for the chop, it is just really perfect day today,"

Coming in 2nd in all three races of the morning was Maxime Nocher (FRA). “It was good. The wind was shifting a lot, but we managed to get three races in and I am pretty happy to get three 2nd’s on the first day. Today I was taking it a bit easy in the strong wind; I didn’t want to break something and the next days (sic.) it will be lighter so I will push harder then,” said Nocher, openly confirming he opted for the more conservative strategy today.

However, a protest in Race 2 from Dor Zarka (ISR) saw Maxime subsequently disqualified from the race, pushing the Frenchman down to 17th overall after Day 1. Spotted on the beach whilst the fleet was sailing the third race, Zarka said “Maxime did not give me a place [room], touched my kite and it all broke”

This was not the only protest to cause an upset at the top of the fleet. An incident between Julia Damasiewicz (POL) and Gisela Pulido (ESP), who are both among the best female riders on the world circuit today, had an incident in Race 2, the subsequent protest seeing the Polish rider disqualified from the race, giving her a heavy penalty to overcome in her fight for the lead. This has allowed Ellie Aldridge (GBR) some breathing room at the top of the female leaderboard.

Said Gisela of the incident: “Julia, Ellie and me were going together to the gate for the final reach and I think Julia miscalculated the layline for the downwind and was struggling to make it through the gate. She was pumping and her kite flew into my kite and we got tangled. I think I lost about 10 places because I was swimming for a while.”

Gisela was relishing the conditions today and opted for the full throttle strategy; “I was pushing as much as I could, especially on the upwind because it is my strongest [skill], and I was not feeling so comfortable downwind today. It was a good day for me overall and I hope to do even better tomorrow.

“I feel really happy to compete in Gran Canaria because I have spent a lot of time here in the Canaries in my life, it is like my second home so I am super stoked.” commented Gisela, who is a Spanish kiting icon and local crowd favourite.

Taking the opposite strategy, by being more conservative today was Katie Dabson (GBR); “It was really gusty and shifty, so it was just about staying in control and I was just trying to minimise my mistakes and keeping on top of the shifts, but it definitely got pretty big at the end there,”

“It has been a while since we have been on such a big start line, so I was just trying to get a clear start and then just chip away. It was definitely a good learning day out there!” said Dabson, one of the more experienced female riders competing here this week.


After the first three races were completed, competitors came back ashore for the scheduled break, but with the wind gusting close to 40 knots, and local knowledge warning of even further increase in strength, the decision was made to display AP over A, thus postponing the two races scheduled for the afternoon and calling an end to racing for the day.

Users browsing this forum: No registered users and 30 guests