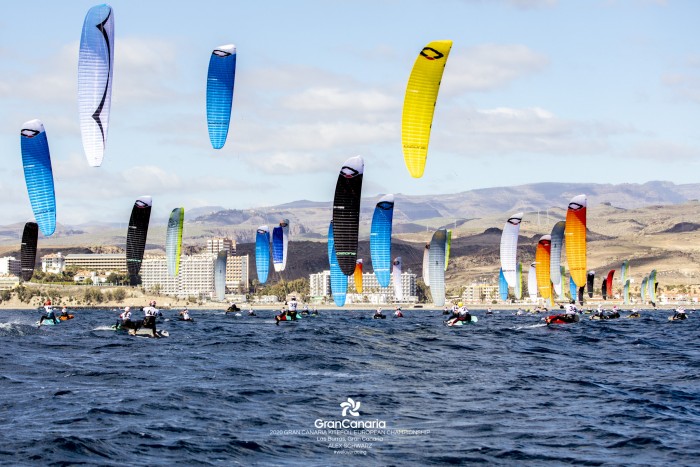 “Today is perfect,” commented Markus Schwendtner, Class Manager of the IKA, as the riders launched their 11m kites into the warm trade winds as they head out for a day of epic racing here at the stunning location of Playa de las Burras in Gran Canaria, Spain. Winds were between 18-23 knots from the same direction as yesterday, the reliable gradient breeze blowing in from the North East.

The first race of the day, Race 4 overall, got underway at 1153 with a clear start, all on starboard. At the top mark, it was Maxime Nocher (FRA) who was in the lead, followed by two Flysurfer kites, Theo de Ramecourt (FRA) and Guy Bridge (GBR). On the downwind, the delta between first and second was slashed, with Theo following Maxime around the right hand-bottom mark close enough to see the hairs raised on the back of Maxime’s neck as the riders all headed back towards the beach, which was lined with spectators.

Theo continued the excellent form we saw yesterday, both rider and equipment working perfectly, charging hard and putting the pressure on Maxime, with Marcus Edegran (USA) right in the mix as well. “I hit some seaweed and had to slow down,” said Maxime, explaining the situation on the second upwind whereby spectators saw the leader suddenly slow down dramatically. Theo saw the opportunity and pressed hard, overtaking to lead the remainder of the race, securing his fourth consecutive win.

It looked as if Marcus could have pushed ahead, but he remained in 6th place for the race before he was quickly ashore and running up the beach. “My main cleat was slipping,” he said, as he quickly bolted on a replacement. “I just wasn’t trimming it upwind, and on the downwind I had to really press it into the cleat to make sure it didn’t slip.” which just proves the skill level of the riders present at this event, where even with equipment not functioning properly, they are still able to be fully competitive at the front of the fleet.

Another positive sign is that going into today’s racing, the top 10 featured four riders under 19 years of age (U19). Jakub Jurkowski (POL) had “...a good first race of the day. I saw Simon Burner (SWE) (U19) at the mark and I saw Alejandro Hernandez (ESP), so I think can compete with them. It is so good and I am very happy that there are so many young guys [at the top of the fleet].”

Currently leading the U19 division, sitting in 5th overall is Arthur Lhez (FRA). When asked how he found it to race in a single, big fleet, with all riders competing together, he commented “I think it is the best way to progress because you always have someone who is stronger than you so it always pushes your limits which is perfect.” Commenting on the high number of U19 sailors at the front of the fleet, Lhez said “With the Olympic Games, we have a really new generation, so I think the youth will be stronger than the more experienced guys, and that is perfect for the sport.”

In Race 4 Arthur was competing hard against Marcus Edegran and Denis Taradin (RUS) when he had a crash during a gybe due to a combination of seaweed and shifty winds, having to work hard to get a good result. “The second race was really good for me, I finished 5th! I tried to beat 4th place [Dor Zarka (ISR)] at the finish line. I didn’t get it but it was really close!” he enthused.

In the next race, with Theo de Ramecourt walking away with another commanding victory, Denis Taradin was putting on an impressive display, fighting hard with Maxime Nocher for 2nd place. The two were trading blows when on the final gybe toward the finish line, it appeared that Denis had a minor crash, allowing Maxime to cruise ahead for a 2nd place, with Denis doing well to recover and secure 3rd place.

Race 6 saw the wind shift to the left just prior to the start, putting the left hand corner of the race track, the side closest to the beach, into the lee of the peninsula. This caught a few competitors out right after the start as they went for the first tack with a few crashes and a few kites in the water.

As the thermal wind tried to build, competing against the existing gradient wind, conditions continued to deteriorate. The shifting wind made things increasingly difficult at the bottom mark gate, with more than a few kites falling from the sky. With one half of the race course lying in the North Easterly trade winds and the other half lying in the Southerly thermal winds, this dramatic shift in conditions meant the race committee displayed the blue-white checkered 'November' flag in the dying moments, abandoning Race 6, with all competitors coming ashore to await under postponement for the wind to stabilise.

Unfortunately, the wind did not moderate enough to allow for further racing today, with AP being displayed over A at 1600 local time. With only two races completed today, competitors will be eager to hit the water tomorrow.