Board suction to water

Board suction to water

I've been watching a lot of how to wingfoil videos latetly, and I see the same misconception I've often seen in kitefoiling discussions. Most of the videos say the way to get on foil is to break the suction or surface tension with the water.

I don't disagree that there is some attraction between the board and the water, and there is some force needed to break the board free from the water (a small weight of water comes with the board). However, those forces are negligible when compared to gravity. Just like in any other setting, gravity is what prevents you from flying.

I understand why there is this misconception. In order to rise up on foil, the force up must be greater than the force down. Sitting still, the only force up is buoyancy (and some lift from the kite or wing). As you start to move 3 or 4 knots, the planing pressure on the bottom of the board becomes the dominant force holding you up with the foil starting to create lift as well. If you try to pop the board off the water at this speed, that planing force goes to 0 in an instant as the board starts to leave the surface of the water. This makes if feel like you are stuck to the water, because the water pushing on the bottom of the board is what's holding you up.

If the lift from the foil isn't greater than your weight, the board never comes fully off the water and you stay planing on the surface. A few more knots of speed (5 or 6 knots if you have a very big foil for your weight) and the foil has enough lift to support your weight without the help from the board, so it feels like you come unstuck from the surface.

I don't think this misunderstanding of forces affects the advice given in the how-to instructional videos. The videos say to push down on the tail to kick the nose up and break suction. Kicking the nose up is the way to take off, but not because you're breaking the suction. You take off because you are increasing the angle of attack of the foil which increases lift (and drag). If the lift of the foil is greater than your weight, then you rise out of the water. Then you level out and accelerate with drag decreased, reaching a speed that can keep you foiling at a lower angle of attack.

Where I do see an issue is when boards get designed with special features to break suction. I often see discussions of making V bottom boards to break the suction or channels to funnel air in. To me, it seems like those feature just increase resistance of the board when it is on the water, making it harder to get up to foiling speed.

I’ve always wondered if there is a formula for planing area, speed, and weight. It seems like there is a lot of designs to improve planing like sharp edges, features on the back edge, and small planing areas on the back of boat hulls. But I haven’t found out anything that says a 60 kg rider needs X cm2 to plane at Y speed. Certainly the features on the back of old race boards and windsurfers are more than marketing? In kite foil boards there is definitely a difference in boards that stick to the water and boards that bounce off. The kite foil boards I have ridden that are the best planing boards have not been so great in touch down. Maybe the “suction” holds the board back rather than down? Or maybe it reduces AOA of foil and board?
Top

I think your right, but surface tension ain’t fake news.

Them hydrogen bonds be strong once you get enough of them! Imagine a plate of glass with handles suction cupped to one side. Wade into calm water and place it flat on the water’s surface and try and lift it vertically without tilt. Careful, you’ll put your back out! Takes some tilt to break the bond. But yeah the wing is the thing and it needs some speed to work. Both wing and board area are at play the whole time. A quick pull from a kite and you go straight to foil. Poor wingers have to learn to pump both foil and wing to build up speed.


davesails7 wrote: ↑
Sun Mar 07, 2021 4:02 pm
To me, it seems like those feature just increase resistance of the board when it is on the water, making it harder to get up to foiling speed.

Maybe. Chined rail on race boards make sense for getting angled right over, but also to help break surface tension in the event of a touchdown. But channels and con-caves require speed to be of use, and likely require more speed than it takes for the wing to get working. Maybe they work for touchdowns at speed enough to make up for the slight increase in wetted drag. Again, more a wing thing.
Top

I don’t have direct knowledge of wing foiling, but the theory of disrupting surface tension exists in other water sports and seems to work for its intended purpose, although Im not sure it’s application is the same for a foil board. For example in freestyle kayaking many boats have hull designs that disrupt the surface of the water and successfully loosen the boat for spins or other maneuvers (works for spinning not carving). Disruption of a smooth water surface serves to soften hard edges of the boat so that they don’t catch while spinning. I can confirm that these designs loosen a boat as promised, but they aren’t intended to get the boat moving any faster.

I kind of thought that the hull features (concaves, Vs etc) on a foil board were intended to keep the board tracking straight, which would result in more speed prior to lifting on the foil wing. This is particularly applicable for short boards that wouldn’t track as well.

Brand Affiliation: None
Has thanked: 10 times
Been thanked: 18 times

StellaBlu wrote: ↑
Sun Mar 07, 2021 9:45 pm
For example in freestyle kayaking many boats have hull designs that disrupt the surface of the water and successfully loosen the boat for spins or other maneuvers (works for spinning not carving).

Front rocker is most importand in landing and in clearing chop when the board isn't airborne. Too much abruptness in the rocker and it will too easily stick and throw you off.
Progressively importantly from the front, as soon as you have bow lift and the board is at a lifting angle, the shorter path for most of the water under the board isn't out the back, but out the sides. For this reason double concaves and other features to resist sideways flow help to trap the water underneath for longer to give more lift.

Inflatable boards typically have all rounded edges, water easily flows around these, clinging and weighting the board higher up and increasing the effective wetted surface area. On my inflateable board I designed and 3D printed flexible Coanda disruptors to provide clean flow off the back and last 200mm or so of each side. Massive difference. In a hard board, this is a simple design choice but look for sharper rear and side edges underneath for better planing performance to quickly get OUT of the water.

Board sucking to the water, yes, absolutely true. A concave catching pockets of air under the board does wonders to reduce the active surface area despite a small increase in overall board surface area. The ability to rock the board over the foil and mast easily to introduce air under the board is important. There's a progressive speed/lift relationship and while you may not have enough speed to lift the board on the foil WITHOUT CONSIDERING OTHER FACTORS, working the wing with the foil and moving your body weight around absolutely is the way to increase speed by working pull of the wing with pendulum of the body and resistance of the foil from sudden downwards motion to cheat normal planing speeds. It only takes short moments of glide to pick up speed from sub planing to planing and then from planing to full foiling.

In terms of feeling that transition between slogging to planing and planing to lifting, it's fairly simple. In planing you will have a clean parting at the back of the board, glassy water peeling off a hard rear edge. Obviously for an unmodified inflatable board you won't get this glassy wake, you will get an increase in turbulence and with sufficient speed increase eventually the foil will overcome the cling around the curves from the Coanda effect.

As a newbie, the most obvious sign of just clearing the board from the water is that all the slapping impact noises with the chop go silent.

This is the time not to loose speed and apparent wind energy by climbing, but to work (initially) on speeding up smoothly with control, back off a little on the wing tension and concentrate on good foot placement. As speed rapidly increases, apparent wind increases too and makes climbing on foil without stalling much easier.
Top

Brand Affiliation: None
Has thanked: 10 times
Been thanked: 18 times

fluidity wrote: ↑
Tue Mar 09, 2021 7:56 am
A concave catching pockets of air under the board does wonders to reduce the active surface area despite a small increase in overall board surface area.

How could a half-inch of concave pressurize air enough to displace the water under the board?

People have tried to entrap air under planing boats (air entrapment monohulls) with questionable success. However, they're trying to do it at 50 knots which provides quite a bit of air pressure into the tunnels. When you're board is going 6 or 7 knots , there's just no way for the air to be pressurized enough to displace the water under your board.

People have also tried to inject air bubbles under planing hulls (also with questionable results), but it has to be pressurized enough to displace the water.

Look at old formula raceboards from Mikes Lab as the best argument. No channels, no concaves. Built to win world championships by being the most efficient planing machines possible, no marketing: 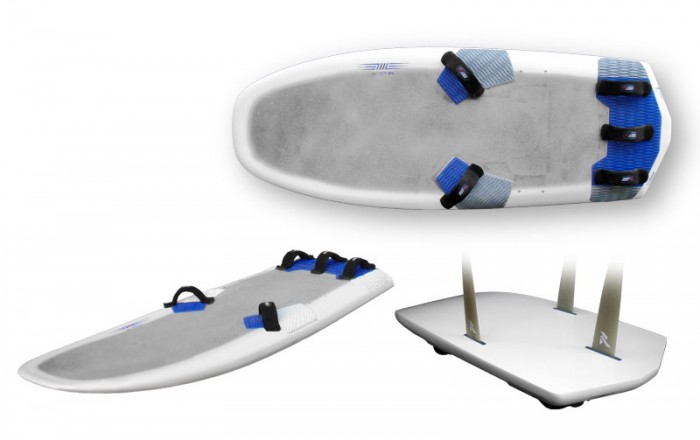 Doesn't seem stuck to the water to me 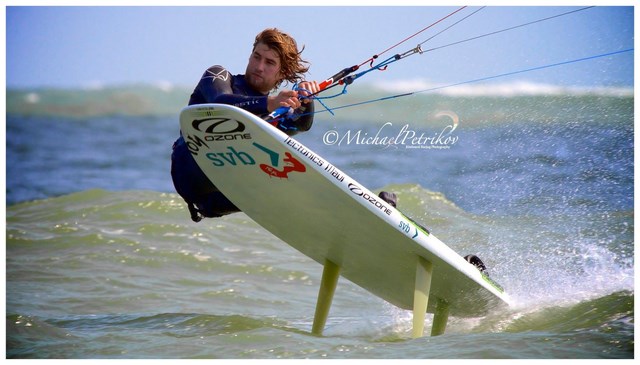 Not sure where the real world trade offs are, but on a small boar (109 cm) and a moderate 1100 cm2 foil, waterstarts are a breeze, and technique is more important than any board feature. Get you COG low and over the foil and get moving forward and your up straight to foiling more often than not. In the same wind, a novice can plow downwind in frustration and might benefit from board tech.
Top

Normally concave doesn’t really give a hovercraft like air cushion.
It does introduce bubbles so the board has less wetted surface, therefore less drag.
This can help in a touchdown situation? How much? Hard to say.
It also usually contributes to directional stability and the feel of the board, though.

Re: a post above on pressure under planing hulls, many powered planing boats used to be designed for, I believe, loading of 40 lbs per square foot. You can estimate or measure the volume of water displaced on plane, wetted surface and pressure at different trim angles etc for some interesting calculations...
Top

As to directional influences of concave and channels. I bet they pale in comparison to the influence of a hydrofoil mast.