Flippers for self rescue

Flippers for self rescue

Does anyone carry flippers in a backpack or on the board in case of self rescue?
I use Peak 4 and one day will it be necessary swim back to the beach again!
Top

Saw a guy carry one short bodyboard fin on a belt, on his backside. Here’s an article on them you might enjoy:

A friend of mine uses them for foiling with foil kites in Tarifa. Theyve helped him a few times. Carries them in a back pack

While I don't personally carry fins with me (I do ride Peak 4s though) I would highly recommend going with the aqua sphere alpha fin over a normal surf fin.
Surf fins weigh a lot and are fairly bulky. The aqua sphere alpha fins are pretty much pure EVA and weigh almost nothing. On the flip side they aren't anywhere near as durable as a traditional rubber surf fin so you'll need a backpack to protect them from crashes.

The problem is they take up space when you aren't self rescuing. Hey swimming is good exercise, that's what I always say.
Top

I use surf fins when going far with foil kite in marginal winds. I just clip them to the back of my seat harness and they flop around behind me but I hardly feel them. If I get a bow tie, they make swimming to/from the kite to reset it on the water much easier, or swimming in if wind totally dies- especially since you don’t have to swim with your arms as much and can manage kite/board more easily.
Top

I had a finding some weeks ago.

Wind dies, I was not far from shore - but had to swim to shore.

Could let the kite semifloat behind me, "drowning" more and more, in 10 meters bar lines, reeled mostly up.
I could also have folded the kite up fully of course.

BUT, on my favorite board with minimal antislip (you almost need nothing on a strapless foilboard, and too much is actually worse if using boots as we have to in the winter), I could not paddle on my board, way too slippery.
I had rotated the harness around, but it was too slippery on the board surface.
Then I ditched the harness and bar, and just held on to either one line or the harness, so "standard surf" suit against board.

This was still mega slippery, actually like ice, so almost got nowhere.

Sitting on the board, legs around board, paddling one hand in the water at a time, worked but extremely slow.

Ditched the kite the very last part, as now I could paddle slightly faster but still no good with winter wetsuit on a hydrofoil specific minimal antislip surface.

On this short "journey" I was thinking if it could be possible to tie yourself to the board somehow?

Problem with the small boards are, they are just a tad under the surface when you are on it, meaning you get "lighter" so even less surface resistance.
And if I had rolled my kite up, so it should be under me on the deck, it would be just as slippery.

Anyway, my point is, one should try to swim on ones board(s) just to know how easy it is or not.

Swimming without your board, pushing it in front of you, towing a drowned kite maybe, is also an option, but not good when winther temperatures or in general as you can not orientate yourself relative to the coast.
If you have footstraps and a bigger board, it is easy of course - racers pack down and paddle for miles sometimes

But most using hydrofoil boards for freeride, are small strapless boards I reckon (a poll made earlier here)

Another smaller board has a thick sponge like grip, a lot easier to paddle on my belly/chest now.

Just a hint - you might be in for a surprise if you havent tried paddling your smaller boards, as there are huge differences on how anti slip surfaces work, and how your specific suit for a given day either slips or has ok hold to the surface

I tried them on my 6' 8" by 27.5" board and they were fine for prone paddling. I tried paddling on my knees and the width of the board was a problem, the inner rear of the paddle was fouling the board, so a prone board width of 22" would be better. I trimmed them down on to the black line on the inner side. 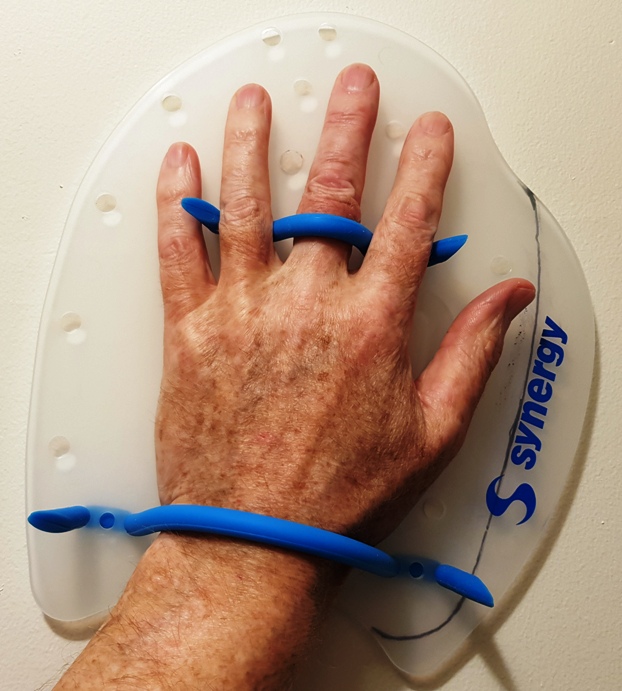 I used to have bodyboard fins which were split and had an adjustable rear strap and were compact, light and efficient.
Top

Hey Jens I do this.

I ride peak 4's and after kiting 20 years with no line breaks I've had a line snap and an extension set let go on the p4s, both giving me a swim.

First time on the 4m I had a fantastic session at a river mouth with strong outgoing tide and big surf out the back. I was close in to beach when the bar flew away, found out later my rope spreader snapped (another first). I could touch sand just with feet but couldn't stay still, feel sand rushing past. By the time I wound in to kite and stuffed it in my wet shirt I was way way out the back in the surf zone.

I paddled with the rip for 20 minutes and wasn't making any progress. pocket board doesn't give you any glide. Started to panic a bit. 1 mate kiting was kms away. No one else around. Sun getting very low. I was trying to paddle with rip but making no progress felt like I was going round in circles with waves breaking on my head.

Finally saw a prone foiler 100m away. Paddled towards and hailed. He told me to grab onto leg rope and together we were able to make progress out of the washing machine.

After that day I bought a tiny12l backpack which is made to fold inside out to a pouch 10cm x 10cm. Super light and just big enough. I went to a bodyboarding shop and tried all the fins, bought the lightest.

I only put it on when going way out in the ocean (relatively) or in an outdoing tide at a river mouth.

Once I put the backpack on I never think of it again till I take it off. The extra kilo or two makes no difference, can't feel it.

Users browsing this forum: No registered users and 30 guests