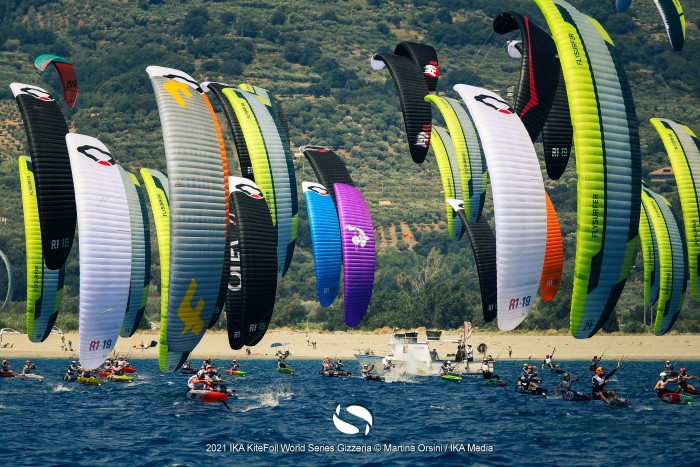 One hundred kiters from 28 nations were very eager to start the 2021 season today in Gizzeria, Italy, at the Hang Loose Beach Club for the first Act of the 2021 KiteFoil World Series. The energy was high since the morning, and as soon as the wind picked up the competitors where ready to launch their kites. The whole group is divided into two fleets and the first to start were the yellow one, while the blue one had to face a halt due to a temporary drop of wind. A short postponement ashore was followed by six more races, with the wind blowing up to 14 knots and only dropping drastically for a thrilling final race for the blue fleet, in which the sailors had to pump hard to stay on the foils until the finish line. Considering the overall fairness of the competition and the effect on all kiteboards involved, especially with regard to equal chances for the yellow and blue fleet to qualify for the final series on Saturday and Sunday, the Race Committee later decided to abandon this race and resail it on Friday before new flight assignments come into effect.

Connor Bainbridge (GBR) said at the end of race three. “Keeping out of trouble is key, there are a lot of people on the starting line. It is my main aim for the event, keeping out of trouble and not getting into any tangles, it can be scary…”. He has three more racing days until Sunday to put in place his strategy, with a little help from the wind.

Nicolas Parlier (FRA) is in second place with two thirds and one second, tightly followed by fellow countryman Axel Mazella, only two points behind him with a bullet on race three.

Daniela Moroz (USA) is the best woman of the day, 21st overall, with a ninth as best result. Poema Newland (FRA) is the second female kiter, 31st overall, and another French rider, Alexia Fancelli, is in third. Sofia Tomasoni wasn’t having a great day after the first three races. “I had better days, but at least we had few races in today, and there are plenty more races in the coming days for me to get better. Usually I am faster, and I am better with my lay lines, but it is as it is today, I am happy anyways and I’ll give my best anyways”.

The re-start of race four is scheduled at 12pm tomorrow, June 9th. Following this race, the Race Committee will try to squeeze in five more to complete the qualifying series before getting into the final series with the fleet divided into Gold and Silver for the weekend. The weather forecast in Gizzeria looks similar to what we’ve seen today, while a bit more wind shall blow on Saturday.

Video ? (with onboard camera shootings like last time in Tarifa)?
Top

Users browsing this forum: No registered users and 35 guests