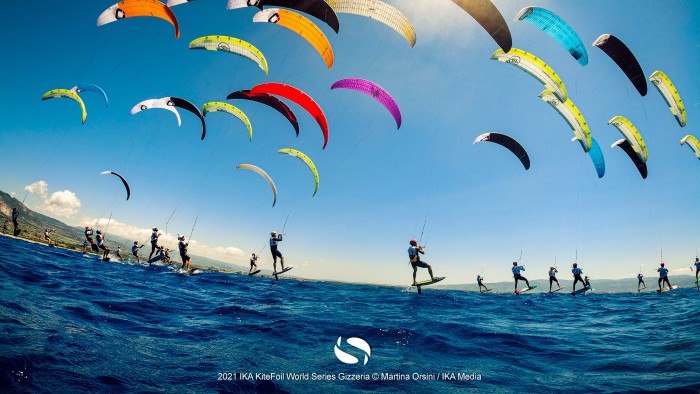 The wind was already blowing strong and steady this morning when the 100 competitors arrived at Hang Loose Beach, Gizzeria, for day one of the Final Series of the first event of this year's KiteFoil World Series. The typical north-westerly breeze was coming a little more from offshore, generating bigger waves for the first time so far on the generally flat surface of the racecourse. Flying over the beach, the kites were smaller than yesterday as the wind forecast were calling for a stronger winds in the afternoon. From 13 knots in the first race, it picked up to over 20 knots, and as the anemometer rose up the kites shrank down and the riders had to put in place new skills.

The 50 sailors of the Gold Fleet were the first to start racing, and they were faster than ever on the line. The fastest of the day was indeed Axel Mazella (FRA) with two bullets, two seconds and a discarded fifth. He is second in the provisional overall ranking, behind Denis Taradin (RYF), who started with a bullet and after two 4th and a ‘retired’ due to a crash, topped the day with another win and confirmed his lead in the overall standings. There are only two points between the top two competitors going into tomorrow’s final 3 races races, with the third palce not far behind. Toni Vodisek (SLO) didn’t kick it off with the right foot today (16th place ) but managed to recover and is now just 12 points from the leader.

Theo De Ramecourt, defending European Champion in the 'open' KiteFoil Class, is sitting in sixth position, 26 points away from the leader, but he thoroughly enjoyed the different conditions today “The wind picked up really, really strong, I don’t think we were expecting this, but I loved it, it was really fun, I think everyone had fun today. This is not my best regatta so far, but I keep on smiling, I am enjoying it so much and there are plenty more races coming up tomorrow” commented Theo coming ashore after the fifth race.

It was wild for the girls out there today, but the smiles on their faces are a statement of the fun they shared with the boys. Daniela Moroz (USA) is still the women's fleet leader in 29th position, Poema Newland (FRA) is second – in 34th – and Ellie Aldridge (GBR) is still third – right behind Poema in 35th, just 2 points behind. Katie Dabson closes the Gold Fleet with Kirstyn Obrien (USA), and is just as happy. “It was good to have different conditions and try different kite sizes, and definitely good fun with the wavier sea state. The Gold Fleet is great, it is just crazy-scary at the start!!” said Katie.

The last day of the KiteFoil World Series Gizzeria will see another three races tomorrow to crown the top ten male and female riders of the week, who will share the 15,000 Euros prize pot at the 6pm prize giving ceremony.