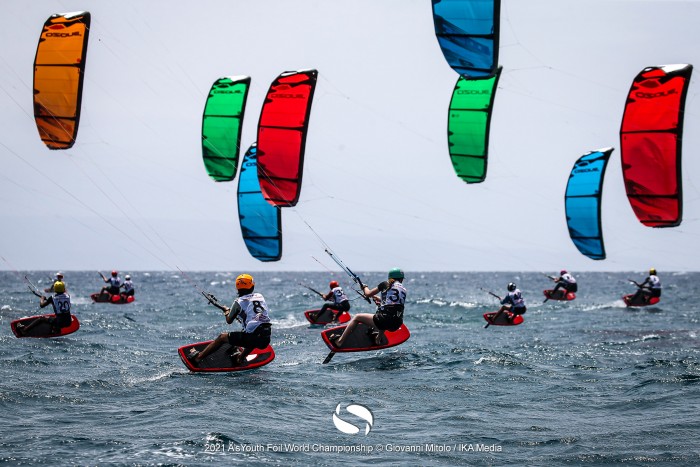 Day one of the 2021 Formula Kite U19 and A's Youth Foil Individual World Championships was nothing but easy, the 65 young kiters had to face strong winds over 25 knots and really big waves. Most of them found it fun and got back ashore in between races with a big smile on their faces, while for the younger and lighter ones in the fleets it was a bit more challenging to stay on the board in the wavy sea state. But all of them went on the water for four tough races, it was a real baptism of fire of the five-day World Championship ending on Sunday.

The first ones to hit the water were the Formula Kite boys followed by the girls and then the A’s Youth Foil with many Under 15 riders. 12 back to back races well managed by the Race Committee and the riders at Hang Loose Beach, that is hosting the second event in a row of the International Kiteboarding Association season, with some athletes participating in both.

“It is different because I guess I am just not surrounded by a lot of people and everyone has a bit more space on the racecourse with less riders, I can just focus on my equipment holding up. The conditions out there are really crazy, it has to be over 25 knots, I had a lot of fun because I trained in the very chaotic conditions, and now that I have that experience, this is quite fun.” Said Maximilian Maeder (SGP), who finished 14th overall last week at the KiteFoil World Series Act 1, ranking second Under 19. Maximillian is leading the overall ranking with four bullets in today's four races. He is followed by Riccardo Pianosi (ITA), who was also racing here last week and actually won the U19 battle with Max, finishing 11th overall in the World Series event. Jakub Jurkowski (POL) and Jis Van Hees (NED) are tied for third just a handful of points short of the leading twos.

In the girls Julia Damasiewicz (POL) made it clear that she came here to do well, she is definitely the favorite winning four out of four races, with her fellow country woman Magdalena Woyciechowska following in her steps with three seconds and a fourth in the first race. Zoe Boutang (FRA) is third but has had today another pace compared to the first two incredible riders.
“I’ve just finished four races in Formula Kite, it was pretty tough I’ve got to say, it was over 25 knots, but I'm very happy. I mostly raced with my teammate Julia (Damasiewicz) and it was it was pretty cool, she's such a good kiter, so yeah I'm happy of my day and that I managed to do quite well”, commented Magdalena Woyciechowska (POL), second after four races.

In the A’s Youth Foil class there are the younger sailors, 17 years old and under. 11 year old Karolina Jankowska from Poland, must not weight more than 35 kilos, with a fresh, freckly face, and beaming light blue eyes. While she is still wearing her helmet and harness, she could not stop smiling and telling how much fun she had out there on the water today, and that she was not scared for one minute. Her teammate Jakub Balewicz (POL), just a couple of years older than her, but with the same lovely, clean face, has been kiting since he was seven and even though he had a few crashes today for the unusually big waves, he proudly declared he came here to try and win in the Under 15 category, proving sometimes things look scarier from the beach than from the water.

Tomorrow’s conditions should go back to classic Gizzeria style, with a 12-15 knot steady breeze and flat water, giving everyone on the race course a chance to prove their worth. Up to six races are scheduled for each day until Sunday, July 18th, when the Medal Series and the Final Race will crown the young foiling World Champions.

Users browsing this forum: No registered users and 23 guests