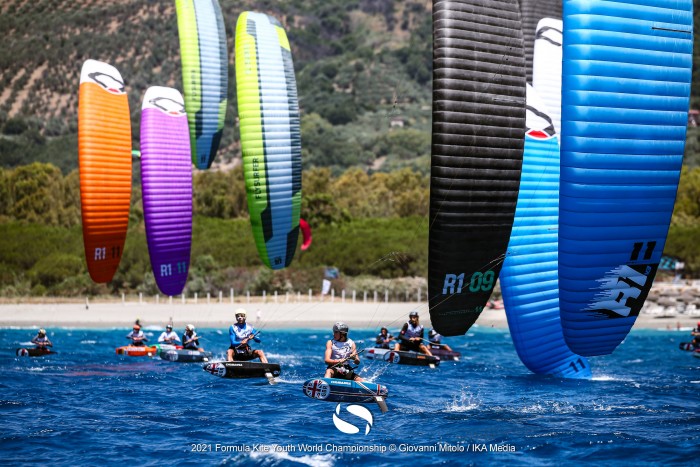 Another windy, wet and wild day on the water for the 65 young athletes competing at the 2021 Formula Kite U19 and A’s Youth Foil World Championship in Gizzeria, Italy. Yesterday’s very strong breeze kept on blowing during the night and picked up as the sun came out in the morning. It was still more than 20 knots average when the first kiters showed up on the beach at Hang Loose Beach, with gusts of 25 and waves. It lightened up as the day went by and all of the three fleets finished four fair and fun races and the overall ranking is shaping up for Sunday’s Medal Series.

The women – hard to call them so as the oldest ones are 18 years old – were the first to hit the water around midday and the Polish supremacy was right there to see, with the top three athletes, all coming from Poland, battling it out for the top spot. Julia Damasiewicz, Magdalena Woyciechowska and Nina Arcisz are all within 12 points on the provisional podium. “I’ve started kiting five years ago and I’ve loved it since then, it is my biggest passion” commented 17-year-old Nina. “There is a nice group of riders in Polonia, we all train together and compete at the Polish Cup from May to August. It’s great, the sport keeps us close, we fight on the water, but we are a team and when we are not sailing we hang out together”. It is great to see so many young girls racing in Gizzeria, they have their own fleet in the Formula Kite with 17 brave and fiery competitors, and in the A’s Youth Foil three girls are sailing with the boys, all under 17 plus 11-year-old Karolina Jankowska, also from the ‘rider farm’ in Poland.

In the men's Formula Kite the battle for first is being fought between Maximilian Maeder (SGP) and Riccardo Pianosi (ITA), with the latter still in second place four points behind. They both claimed two bullets each today and, as it was for last week’s event, it will all come down to the very last day. Third spot for the Dutch sailor Jis Van Hess, only seven points from Riccardo.

In the A’s Youth Foil Jan Koszowski is still the leader of the ranking, after three wins he had to throw off a DNC in the last race, leaving some room to Mikhail Novikov (RYF) and Angelo Soli (ITA), who close the temporary podium all within eight points. Enzo Louber (FRA) is the best Under 15 rider and Gal Boker (ISR) is the fastest girl, but there are many races to be sailed between now and Sunday and with different conditions the results might change.

The breeze is supposed to keep on lightening up tonight, and tomorrow, a nice 15 knot wind should be on the racecourse for some champagne riding.

Re: 2021 Formula Kite and A's Youth Foil Worlds - Tight battle on top for both boys and girls after eight races

Re: 2021 Formula Kite and A's Youth Foil Worlds - Tight battle on top for both boys and girls after eight races

Users browsing this forum: No registered users and 19 guests