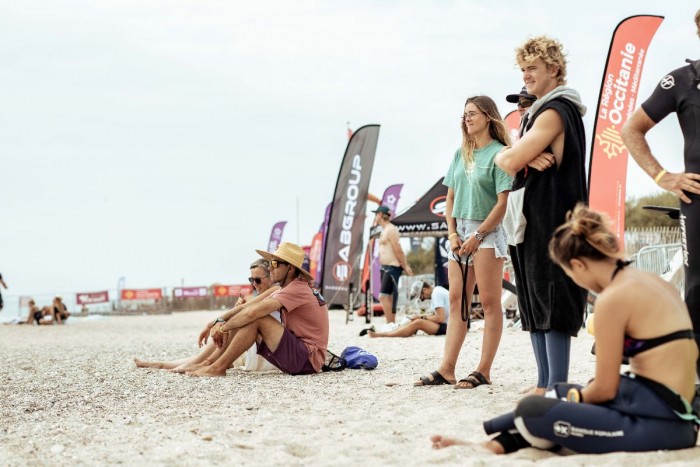 A packed roster of top kiteracers is set to do battle for the prized Formula Kite European Championship crowns at the spiritual home of kiteboarding on the waters off Montpellier’s Villeneuve Les-Maguelone beach, southern France.

The competitors in the Olympic event, 91 men and 40 women from 30 nations worldwide, have navigated sometimes onerous coronavirus restrictions to take to the start line for five epic days of racing.

The elite athletes—among them a clutch of former and reigning world champions—will be joined by a fleet of 18 young aspiring kiteboarders fighting for the International Kiteboarding Association (IKA) A’s European Championship titles.

The innovative class for 11 to 16 year-olds will race in one fleet—in U15 and U17 boys’ and girls’ categories—competing on identical one-design equipment, a hydrofoil and board made by SABfoil and Ozone Edge tube kites.

The IKA A’s competition is another casualty of Covid, the compactness of the young fleet explained by the closure of Ozone’s manufacturing facility in Vietnam, which was belatedly hit by the pandemic.

Despite the strong turnout of most of the top Formula Kite athletes from around the world, the Festikite event now in its fourteenth yearly edition has also been hit by Covid. The Europeans will form the core of the event this year without the normal kite jamboree of freestyle and big-air alongside the racing.

But in spite of the exceptional challenges, the excitement of hosting the biggest event of the year so far is palpable in Montpellier on the very beaches where kiteboarding was pioneered around 1995, with F-one founder Raphaël Salles one of the key figures.

The anticipation has been further heightened by the fact that the competition sets the clock ticking on the countdown to the Paris 2024 Games, when the IKA Formula Kite men’s and women’s events will make their debut and Olympic medals will be up for grabs on the Marseille track just along the Mediterranean coast.

Fittingly, the French have fielded a large team studded with all their strongest riders. Reigning European champion Axel Mazella (FRA) will find himself battling against countrymen Nico Parlier, reigning world champion, Théo de Ramecourt and Maxime Nocher, in breezes expected to vary from punchy on the opening day and dropping to more characteristic light thermals towards the climactic medal races.


But Slovenia’s Toni Vodišek will also undoubtedly be a force to be reckoned with, eager to reassert the dominance he enjoyed in 2019 before a shoulder injury ended his season. Britain’s Connor Bainbridge, who took the third podium step at the 2020 Europeans, will also be battling for supremacy.

In the women’s field, the French will again be highly competitive on home waters. But the reigning European champion, Poland’s Julia Damasiewicz, and runner-up, Britain’s Ellie Aldridge, will provide a severe test for the French trio of Lauriane Nolot, Poema Newland and Alexia Fancelli.

It is difficult, though, to see any of them getting the better of reigning and four-times world champion, the US’s Daniela Moroz, even though rivals have been closing the gap on the peerless young American who would scoop the Open European title with a victory.