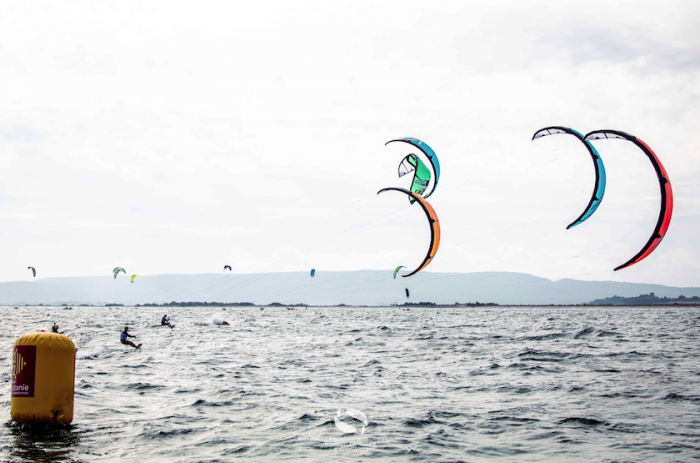 On the second of the five scheduled days of the regatta being staged on the Mediterranean, off Montpellier’s Villeneuve Les-Maguelone beach, southern France, the wind failed to show up and no racing was possible.

Ninety-one men and 40 women from 29 countries and five continents have navigated coronavirus restrictions to do battle on the bay of Aigues-Mortes and set the clock ticking on the countdown to the Paris 2024 Olympic Games, when Formula Kite will make its debut on the race track off Marseille just along the Mediterranean coast.

After five searingly-quick races on the trapezoid track shared with the elite Formula Kite racers, Russian Federation’s Mikhail Novikov, 16, tops the standings with a perfect score of five bullets.

The IKA A’s is an Olympic pathway class, designed to inspire and upskill young athletes between the ages of 11 and 16 to join the foil racing revolution, competing on identical SABfoil hydrofoils and boards, and Ozone Edge kites restricted to three sizes, 6m, 9m and 13m.

The affordable one-design equipment ensures a level playing field, where the young athletes’ skills and prowess come to the fore with high-octane racing, providing a fun and safe environment that is packed with thrills to attract teenagers.

For the Israeli team of three boys, the pace of kite foiling made it easy to attract young sailors from other sailing classes like the Optimist, with the bonus that they often already have racing skills in their armoury.

Eli Zuckerman, head coach of Israel’s Olympic sailing team, is in France with his daughter, Gal, who is competing at the Formula Kite Europeans. For Zuckerman, the A’s class is a perfect proving ground, partly because of its simplicity and affordability in comparison to the Formula Kite.

“In August we had a seminar for kids who came from Optimists and Techno 293 windsurfers,” said Zuckerman. “Within four days they had learned to ride foils. I know they’re loving it. For sure the three guys we have will go from here and start on Formula Kite gear.”

Tal Basik Tashtash, 16, came from a windsurfing background and began kite foiling a year ago. He sits in third place overall after the first five races and is stoked with the foiling class.

“I really enjoy it for so many reasons,” said Tashtash. “It’s far quicker to rig than a windsurfer and travelling is much easier too. I love jumping high and the speeds that I can go on my foil.”

Russian Federation’s coach, Aleksei Chibizov, who’s athlete Novikov tops the leaderboard, is enthusiastic about the concept, despite the slightly slow uptake due to the coronavirus restrictions that closed the Ozone factory in Vietnam and made kites difficult to acquire.

“In my opinion, the A’s class is a great idea,” said Chibizov. “The equipment is easy and simple to use, for sure. I see that the competition is more even because it’s one-design, which is great for the parents and kids. I think in this coming year we will see more kids joining than in the first year.”


U17 A’s Youth Foil (after five races, one discard)


U15 A’s Youth Foil (after five races, one discard)