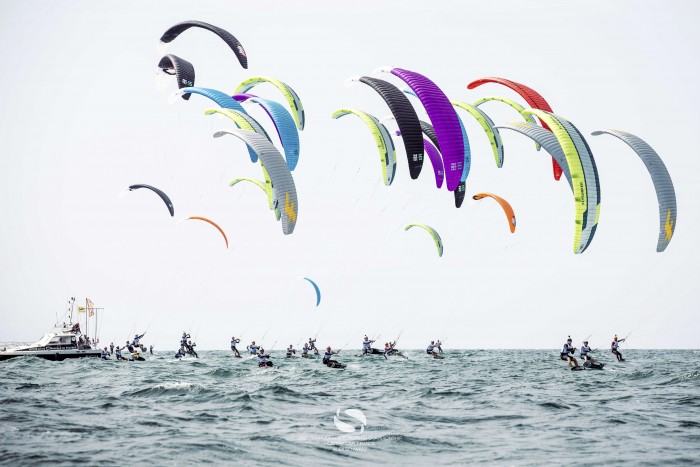 The roster of young kiteboarding athletes who have braved coronavirus restrictions to make it to the start line of the Formula Kite European Championships, has grown dramatically as the countdown to the event’s Olympic debut has begun.

More young teenagers than ever have turned up to attend the biggest regatta of the year so far, being staged on the Mediterranean, off Montpellier’s Villeneuve Lès-Maguelone beach in the south of France.

Yet, on the third of five scheduled days of competition, the young athletes—among the stellar fleet of 91 men and 40 women from 29 countries and five continents—were again disappointed when the wind speed was never even close to the minimum limit of 5 knots and no racing was possible. The same fate that befell the International Kiteboarding Association (IKA) A’s Youth Foil European Championships being run in tandem.

Frustrations aside, some of the young kiteboarders had tasted success already in the regatta’s opening races of the championships, which set the clock ticking on kiteboarding’s first Olympics at the Paris 2024 Games.

The French contingent at the Europeans is predictably strong, with Axel Mazella topping the men’s standings, while countrywoman Lauriane Nolot leads the hunt for the European women’s title.

Dreams of Olympic gold on home waters ensured the French Sailing Federation (FFV) has poured resources into the team that boasts youth U23 and U19 teams. It is already reaping results with Benoît Gomez, 20, sitting fifth overall and Poema Newland, 20, fourth in the IKA Formula Kite Europeans.

Both racers were part of the team that took part in the Youth Olympic Games (YOG) in the Twin-Tip Racing (TT:R) kiteboard slalom in Buenos Aires in 2018, where Newland won silver. Once their YOG adventure ended they turned to foil racing.

Antoine Weiss, the FFV youth coach, has watched in wonder at the progression of the young pair of “foiling natives”. Along with a host of other youngsters they are challenging France’s clutch of European and World champions.

“Benoît Gomez started with the foil,” said Weiss. “He stopped for the Youth Olympics, but it was logical for him to come back to foiling. He just loves the sensation on the foil. Poema Newland, too, has found confidence, balance and physical conditioning. She’s strong and fast.”

Italy’s Sofia Tomasoni, 19, who won TT:R gold in Buenos Aires, was one of many who made the leap to foil racing. But she admits that with no foiling background or sail racing pedigree, the transition was tough, though she is determined.

“For me it was not really easy because kitefoil racing is such a different sport, totally different to TT:R,” she said. “I had to learn sail racing. But it’s harder than I thought. It’s hard to get support. The federation wants to see results, which I haven’t managed to get yet. But the prospect of going to the Olympics is something that made me more competitive. It was the push I needed.”

But among the youngest is Singapore’s Max Maeder, 14, who has been foiling and competing internationally for already more than three years. Remarkably he sits fourth overall after scoring two bullets on the Europeans’ opening day in a breakthrough performance.

Maeder juggles the responsibilities of travelling with his younger brother Karl, who also competes, with home schooling online while on the road. A language tutor coaches him online in Mandarin, study he was able to fit around his kiteboarding with training partner Martin Dolenc in Croatia.

Despite his already-long experience, the mature teenager never tires of the grind of top-level sport. “It’s actually more rewarding and even more fun than it was before,” he said. “It’s because I’m fascinated by refining the details and little things, which is way more fun.”