Sardinia landmark of World's sailing: the Poetto beach will host the IKA KiteFoil World Series again. There are great expectations for the champions of a sports discipline standing in the 2024 Paris OG schedule

Cagliari means “home” for the great sailing. The recent history and the strong working relationship with Luna Rossa say it all, as well as a present and a future full of international events, confirm it.

On October 6th-10th, the Golfo degli Angeli's waters and 6th stop of the Poetto, iconic beach of Sardinia's capital, will host the Sardinia Grand Slam, IKA KiteFoil World Series' round-2, organized by GLEsport in collaboration with Chia Wind Club, under the aegis of World Sailing and IKA, International Kiteboarding Association.

Kiteboarding's international big guns will head to Sardinia to tackle the season's main event of a sports discipline that has officially become part of the 2024 Paris OG program. About thirty nations will be represented, with French Axel Mazella and American Daniela Moroz ready to reaffirm their superiority in Cagliari after the victories scored two years ago.

The kitefoil is a constantly evolving sports discipline, one of the most scenic among the sailing disciplines. A byword for action and extreme performance, kite-drawn surfing is made up of short, twists and turns. The Poetto beach will represent a privileged observation point for the crowd as the race's course will be condensed a few meters from the shoreline, the buoys and “gates” will be positioned near the coast and the finish line will always be facing the beach and the crowd, regardless of the direction of the wind.

“We are happy to be back after the forced stop in 2020. We are motivated to do better and better and give Cagliari a great show”, GLEsport President Gian Domenico Nieddu said. - “Cagliari has shown to believe in sailing and kiteboarding. I wish to thank in advance to our partners, the Tourism Department of the Autonomous Region of Sardinia and the Municipality of Cagliari, our Chia Wind Club collaborators, as well as World Sailing and IKA for renewing their trust”.

Sardinia Grand Slam OC is working for a really special edition, as they decided to contribute to raising awareness of the protection of the sea, in line with the UN 2030 Agenda and the Sustainable Development Goals. In this context, a village divided by thematic areas will make Cagliari a pole of interest for activities and events to develop a greater awareness of the importance of protecting marine waters through the adoption of sustainability criteria, trying to strengthen the culture of respect and love for the sea.

“There's no doubt that Cagliari is the ideal stage for such an important challenge of this importance" - President of IKA Mirco Babini commented -. “The sailing vocation of the city is a fact and the regatta conditions at Golfo degli Angeli are perfect for practicing kitefoil, a specialty in great growth also regarding the practitioners”.

The Sardinia Grand Slam has all the makings for a new great edition. The event promises to attract media and fans' attention, boosting the tourist flows, in view of that seasonal adjustment promoted by the Sardinia Region. "Today an effective territorial promotion is strictly linked to a wide and diversified offer, capable of arousing interest and satisfying the needs of an ever-growing public, by implementing the audience of potential visitors. We must focus more and more on major sporting events, a byword for most authentic values and a vehicle for tourism promotion", Sardinia's Tourism Assessor Giovanni Chessa explained.

After the difficult months of the pandemic, Cagliari and the whole island are eager to restart: the Sardinia Grand Slam and the great kiteboarding will be a springboard for their desire to fly. 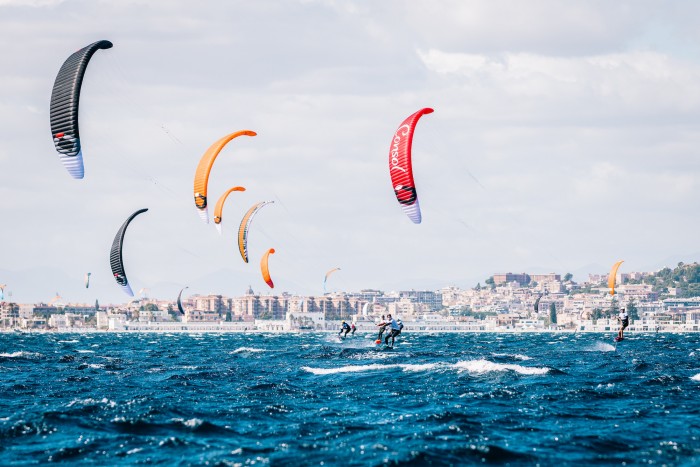