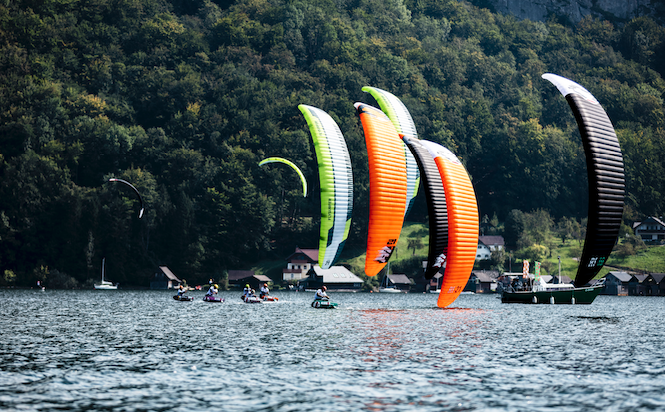 
The fastest kite racers in the world are ready for four days of intense race action at the UPPER AUSTRIA KiteFoil Grand Prix Traunsee which is hosting the highly-anticipated second stop of the IKA KiteFoil World Series.

The high-octane event sponsored by Upper Austria Tourism will play out at Rindbach, Ebensee, on the southern end of Traunsee, a breathtakingly-beautiful lake framed by striking mountains and picture postcard villages.

The dramatic backdrop and the lake’s flat waters will offer a fitting racetrack for the World Series’ second stop of a scheduled five, with the leading kitefoil racers fighting for a slice of the €15,000 prize pot that will be shared equally between the men and the women.

Traunsee has long been a watersports mecca, with sailors, windsurfers, kiteboarders and most-recently wingfoilers attracted by its reliable breezes. It is no stranger to hosting the international kite racing elite, staging the International Kiteboarding Association (IKA) Formula Kite Mixed Relay European Championships a year ago.

The UPPER AUSTRIA Kitefoil Grand Prix, that counts Raiffeisen Bank among the sponsors, will also include the national kitefoil championships. Austrian riders will compete among the world’s best racers on the final two days at the weekend, their finishing positions in the fleet defining the podium for local riders.

Valentin Bontus of Austria is also to compete in the KiteFoil World Series in the year that kiteboarding begins its countdown to making its Olympic debut at the Paris 2024 Games.

The 29 athletes from 15 countries will battle in one fleet, among them Russia’s Denis Taradin who heads the World Series’ standings following overall victory at the tour’s first stop at Gizzeria, southern Italy, in July.

Undoubtedly, Taradin will be pushed hard by the newly-crowned Formula Kite European champion France’s Axel Mazella, along with countrymen Théo de Ramecourt. But Germany’s Florian Gruber and Britain’s Connor Bainbridge will seek to put their stamp on the men’s 21-strong fleet.

Likewise in the women’s fleet, the other freshly-minted Formula Kite European champion, Poema Newland (FRA), will look to continue her winning ways. Countrywomen Lauriane Nolot and Jessie Kampman will, however, be trying to spoil the party.

Whatever the outcome, the stage is set for four thrilling days of action set to an incomparable backcloth which will be on livestream on Facebook on the climactic final two days of action.