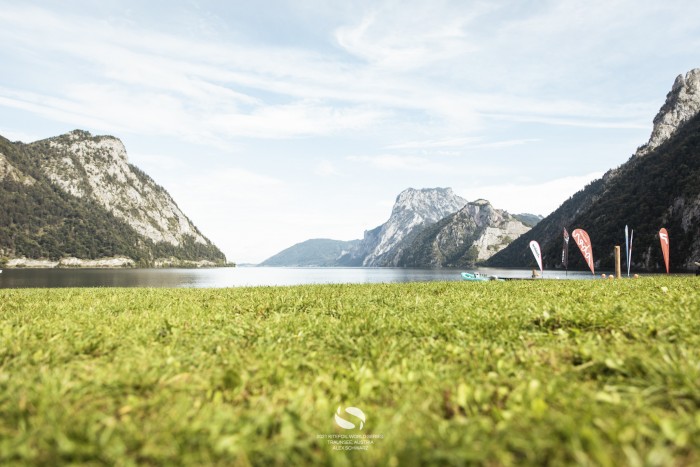 The KiteFoil World Series Traunsee, the tour’s second stop, being fought out on a breathtaking mountain lake in Austria, has won the backing of key sponsors eager to deploy the top-level event to project the region on the world stage.

International focus on the globe-trotting World Series tour, with its cutting-edge kitefoil racing contested by the world’s best, is being harnessed by key sponsors Upper Austria Tourism and the major Raiffeisenbank.

In different ways, both backers see the attention-grabbing event, being hosted by the UPPER AUSTRIA KiteFoil Grand Prix, as an ideal vehicle to bring the strikingly beautiful region, filled with culture, to a wider audience.

The thrills and high-speed drama of the kitefoil class, the world’s fastest solo fleet, gels with the image the Austrian region, studded with lakes and mountains, wishes to showcase.

Sailing and watersports have a long tradition on Traunsee. The postcard picture village of Rindbach, Ebensee, at the lake’s southern end, is the base of the World Series' second Act and has won the unanimous approval of the athletes, elated to race such a stunning setting.

Traunsee Week is a major annual sailing event in the region. International classes like the foiling GC32s and the RC44s have staged multiple events on Traunsee over the years. The RC44 class, now the 44Cup, in particular prides itself in visiting spectacular and diverse venues.

For Upper Austria Tourism, the decision to get behind the KiteFoil World Series Act continues that trend and is simple one because kiteboard racing meshes well with the image it wishes to project.

Andreas Murray, CEO of Tourism Traunsee-Almtal, said: “It’s quite easy really. Lake Traunsee is renowned for various watersports, extremely diverse watersports like kitefoiling and wing-foiling. These are very trendy. We are keen to promote them internationally, and in Europe in particular, to make it attractive for young people to come on holiday.

“Kitefoiling and wing-foiling provide a great platform for us. They enable us to showcase the area’s highlights with something unique like kitefoiling, or wing-foiling. Traunsee region is the most beautiful region in the middle of the Austrian lakes and mountains.”
The other key event sponsor, Raiffeisenbank, also considers kitefoil racing an ideal way to reach a new audience to promote the region, give something back to the co-operative bank’s customers, and burnish its own image in the process.

“Our bank is owned by a lot of the inhabitants,” said Klaus Ahammer, Raiffeisenbank CEO. “We are responsible for the area and what’s going on there. We need to work for the people and give something back. Promoting sport is part of that social responsibility.”


Raiffeisenbank sees investing in sport as a way to both help the community and help itself.

“The return we get is the boost to our image,” said Mr Ahammer. “Kitesurfing and kitefoiling are something new for the young people. They’re interested in new sport. Especially in Ebensee, which is a beautiful place for kiteboarding and tourism. We want tourism to grow to get more money. But it’s not only for the money, it’s for the fun too. Kifefoiling is a very new thing, with risks and speed. There’s nothing like it.”

Unfortunately, on the second of the four scheduled days of the KiteFoil World Series Traunsee, the usually reliable breeze failed to fill-in and as a result no racing was possible. However the forecast looks promising for the regatta’s final two days.