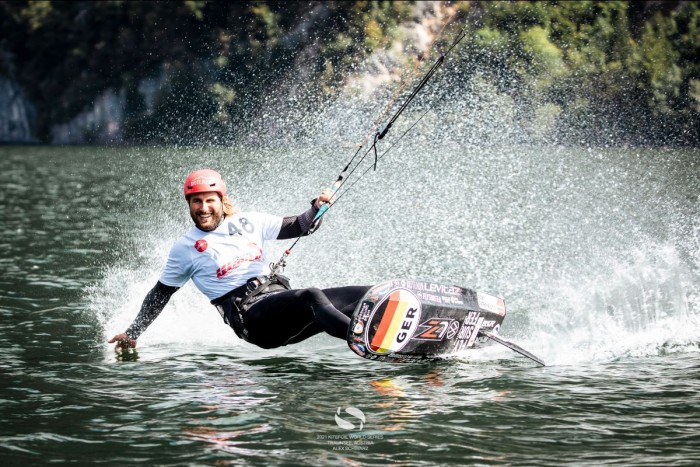 The ranks of elite kiteboard racers at the KiteFoil World Series Traunsee in Austria have been swollen by aspiring young athletes who have already tasted success.

But for those scaled the highest levels of Twin-Tip: Racing (TT:R) at the Youth Olympic Games (YOG) in Buenos Aires in 2018, the transition to top-level kitefoil racing was a rude awakening.

For some competing at the UPPER AUSTRIA KiteFoil Grand Prix, which is hosting the World Series’ second Act in the spectacular setting of Ebensee, the challenges and unexpected difficulties forced a dramatic reappraisal of themselves.

They, like all the 23 men and eight women from 15 countries at the World Series regatta, suffered a third windless day which again prevented competition. The race committee got the athletes out on the water and was minutes from a first start when the fickle thermal breeze died again.

But the frustrations of waiting for the wind, pale in comparison to the challenges of competing at the highest level, especially after the glory of winning Youth Olympic Games medals at such a tender age.

Italy’s Sofia Tomasoni took gold in Argentina after moving into TT:R slalom racing from her beginnings in freestyle twin-tipping. The elation of success spurred her on in the hope she could once again compete in the Olympics when kitefoil racing makes its debut at the Paris 2024 Games.

“When I walked on to the podium and heard the anthem of my country, I knew that’s what I wanted for my life,” said Tomasoni, 19. “It’s the best feeling I ever had in my life. It gave me the push to move into foiling, which was totally new for me.”

The road has been far from smooth, littered with challenges and adversities. Those made her re-evaluate her perception of herself and become stronger in the process, even though she has yet to score the results she expects to get the support she needs.

“It’s like two different sports,” she said “The foil kites, foil boards, and the race courses are totally different from TT:R. You’re on the podium and you think you’re the best in the world. Next day you discover you’re a beginner again. I expected it would be easier. I expected a lot of myself. I’ve gone through so much it made me stronger, but also more humble.”

France’s Poema Newland, 21, won silver behind Tomasoni in Buenos Aires. She, too, struggled with the transition. But for her the outcome, despite faltering motivation, has been more successful after she became Formula Kite European Champion in Montpellier a week ago, on home waters.

“The transition has been really hard,” said Newland. “It’s perhaps the same as when you change sports. The gear is totally different. You have to learn sailing tactics and the weather. It’s nothing like TT:R.

“I certainly didn’t think I would be brilliant. I knew it would be tough. I had a lot of failures last year and I didn’t even want to kite. To make it work, you have to put your whole life into it. Only since the start of the year have I applied myself and it’s worked.”

The Netherland’s Sam Aben, 18, has fairly recently begun a similar journey from twin-tipping to foil racing with the national team. He found the learning curve steep, but the challenges of racing were thrilling and engrossing.

“Before, I would focus only having as much fun as possible on a twin-tip,” he said. “But then you begin to notice that the conditions aren’t quite perfect and it’s not so much fun. But with a kitefoil session you always have to focus on some aspect to get better and challenge yourself. So it’s different. I love it.”

On the World Series Traunsee’s last day, the race committee plans an early start, trying another spot on the lake to find those elusive thermal breezes to race and find a winner of the tour stop.