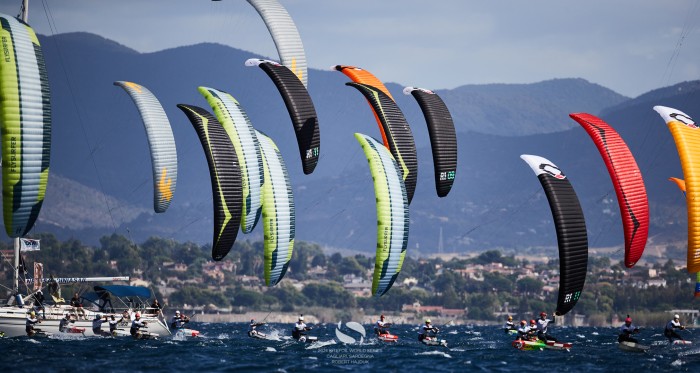 Only the finest margins separated the top men and women in the opening salvos at the 2021 KiteFoil World Series Cagliari, as tough conditions tested the mettle of the elite athletes to the limit.

In the gusty and shifty Mistral breezes that hit 33kts off Cagliari’s Poetto beach on the Italian resort island of Sardinia, the leading men and women racing in one fleet traded bullets and the overall leads.

But on his birthday, Britain’s Connor Bainbridge did enough in searingly-quick racing, to take the lead with two bullets and a second place in the opening day’s five races on the stunning Gulf of Angels, as the breeze built from 17kts.

Bainbridge, riding a 10m F-one Diablo 5 that he had a hand in designing, saw off challenges from the French trio of Axel Mazella, Théo de Ramecourt, and Benoît Gomez. Each scored their own bullets, but lie just behind the Briton.

“That’s the first time I ever had to de-power a 10m kite,” said a bemused Bainbridge. “It was pretty full on. I haven’t raced in big breezes for a long time. It certainly blew the cobwebs away. The level’s amazing now. Two years ago we’d all have been just surviving in these conditions, now everyone’s pushing as hard as they can. So, I’m pretty happy.”

With the women racing in one fleet with the men, competing for an equal share of the €25,000 prize pot up for grabs at the four-day regatta, the overall lead continually changed hands.

Yet, after a rocky beginning in which she was late for the day’s opening two races after indecision over her kite size, Formula Kite European champion, France’s Poema Newland, managed to top the women’s standings.

Once she had finally settled on her 9m kite, she was able to profit in the building breeze. In the closing three races she leapfrogged her fellow countrywomen, Jessie Kampman and Lauriane Nolot, who lie just behind her in the standings.

“Finally, in the third race I got to the startline and I found that I was there with everyone else, for a change,” said Newland, wryly. “That was cool. But the conditions were tough. I was just trying to finish the races without crashing and hurting myself. I’m happy.”

Forty-two athletes—29 men and 13 women from 19 countries and five continents—have journeyed to battle in the third act of a scheduled five of the International Kiteboarding Association (IKA) KiteFoil World Series. Overall tour winners will be crowned IKA KiteFoil world champions.

Few have ventured further or come with more diverse experience than New Zealand’s Justina Kitchen and Argentina’s Catalina Turienzo. Kitchen, 32, is a former windsurfing RSX Olympian, while Turienzo, 15, is at her first competition.

But both in their own different ways have come to the World Series Cagliari to learn. Kitchen, a mother of two daughters aged four and six, fits her training around their schooling. She has the Paris 2024 Games, when kiting makes its Olympic debut, firmly in her sights.

For Kitchen the inspiration to drive herself to an Olympic kitefoil campaign is her father. He won gold in the Tornado class in 1984, and his exploits ensured she always kept her Olympic dreams alive.

“When the children are really young it’s hard,” she said. “I drop them at school at 8.30am and pick them up later. I go and do all my training in between. It’s great to have the opportunity to be a mum and do my training.”

Kitchen first raced in Cagliari in the Formula Kite worlds in 2012, when kiteboarding was briefly slated for the Olympics. But when she had a family she turned her back on competition, only to find her kitefoil racing ambitions rekindled when she went kiteboarding for fun.

Now she has been coaching the New Zealand men’s youth kitefoil team for the past two years, complementing her own Olympic training.

“I find coaching really, really good for my own racing,” she said. “I see them making mistakes and tell them. Then I make the same mistakes myself and quickly realise, so it short-circuits the learning process. Now they’re getting faster than me, so I have to be smarter.”

But the pandemic and New Zealand’s isolated location have made travel difficult in the past two years. Still, despite the challenges, Kitchen knew it was vital to come to Cagliari to rediscover how her skills stacked up on the world stage.

The young Argentinian Turienzo is also at the World Series to pit her skills against the best, whose levels have advanced dramatically as Olympic fever has gripped athletes and swelled their ranks.

“This is my first-ever competition,” she said. “I’m definitely a bit nervous and anxious, but really happy to get the chance. But I really wanted to see how it is to race in the environment of a competition. My goal is to go to the Olympics in Paris.”

For all the pressure that goes with competing at the top level, Turienzo has discovered the other athletes receptive and helpful on her journey.

“I’m trying to get my tacks and gybes down,” she said. “The experience of the other racers has helped me a lot. It really helps to see how the others do everything. It’s been really helpful to be with them.”

All the races of the KiteFoil World Series Cagliari, which reaches its finale on Sunday, will be featured on Facebook Livestream. 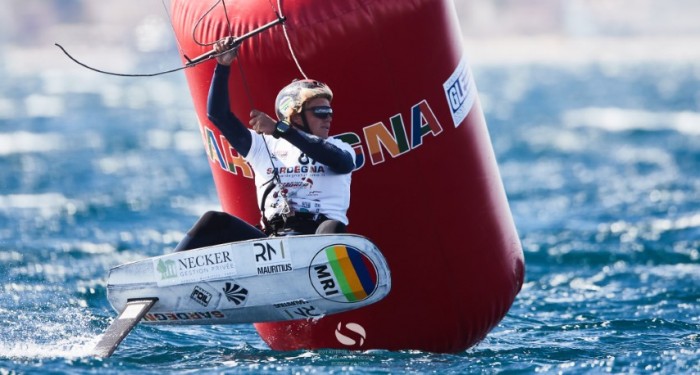 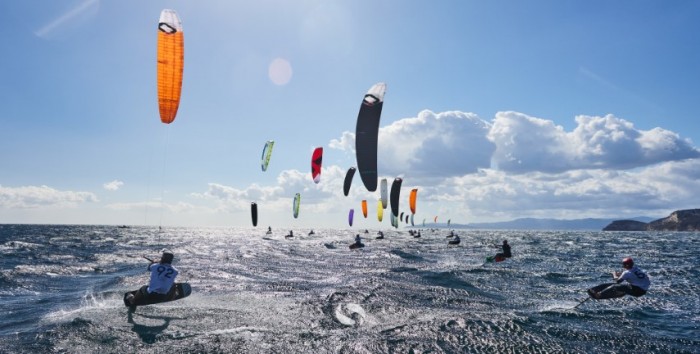 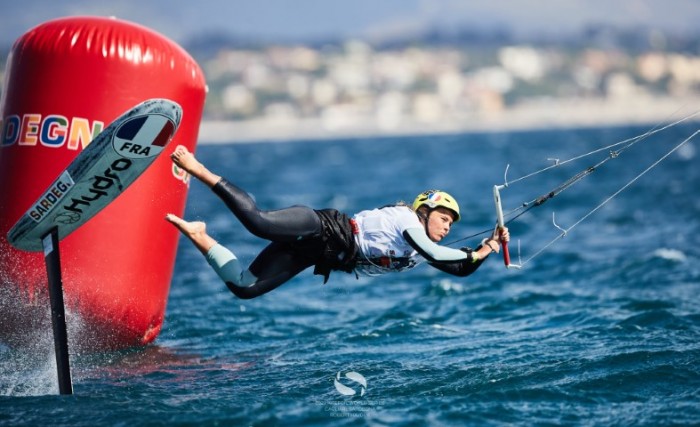 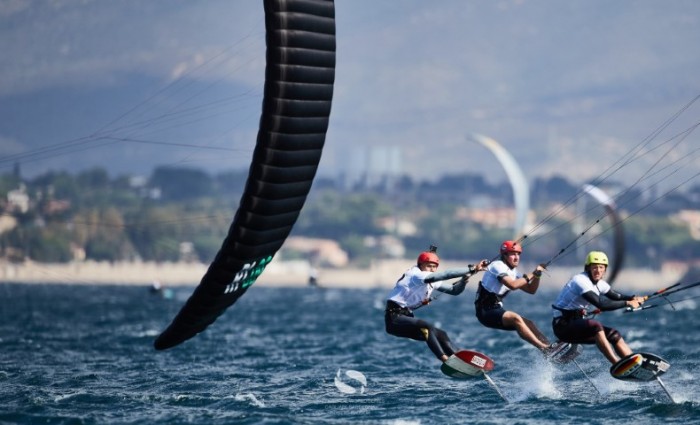 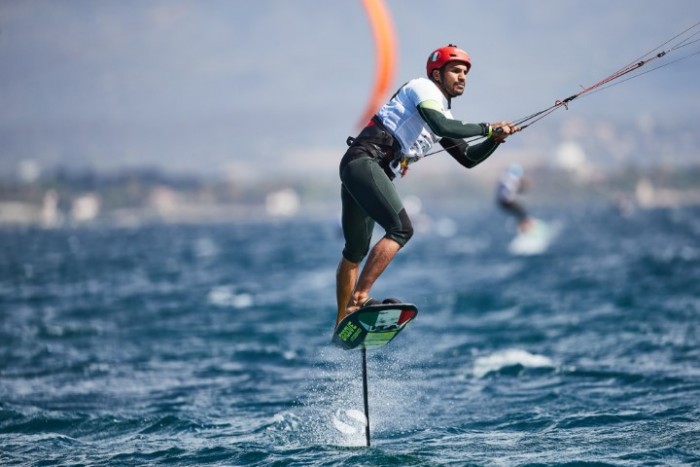 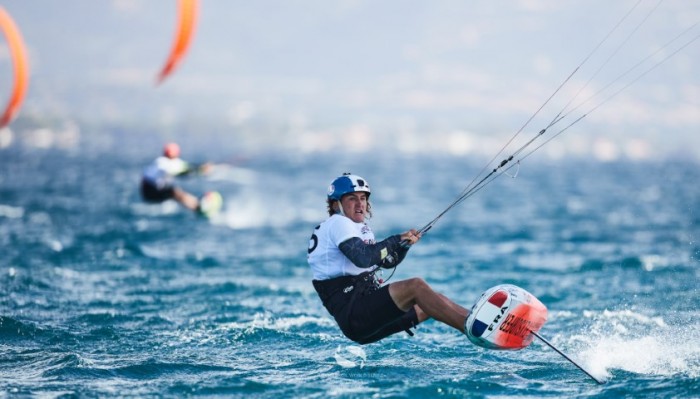 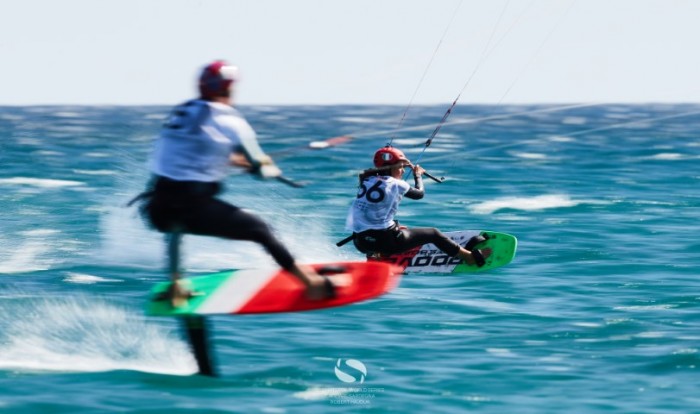 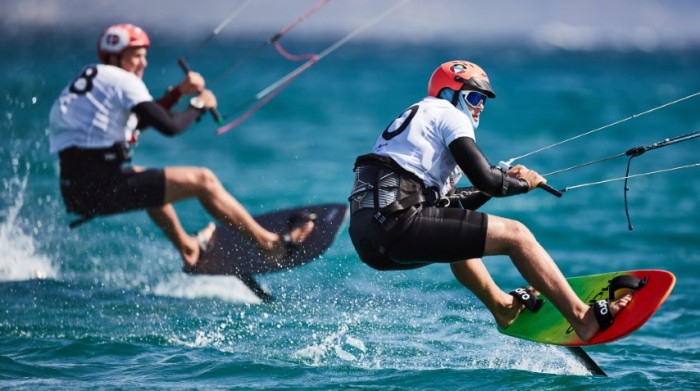