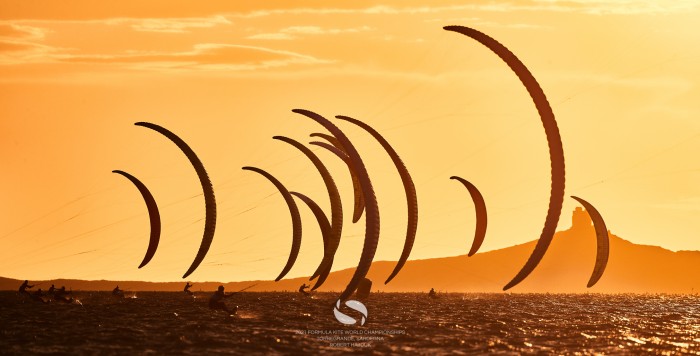 The opening exchanges at the Formula Kite World Championships, being fought out on the Gulf of Oristano on the Italian island of Sardinia, slightly upset the form book after a faltering start, when the wind teased before the action kicked off in earnest.

Britain’s Katie Dabson scored well in her day’s races on the spectacular track off Torregrande, as the south-westerly breezes filled in late in the day, leaving her second overall.

Polish teenagers Nina Arcisz and Julia Damasiewicz picked up the pace as racing intensified, after the wind died mid-way through the day’s second race. When the breeze shifted and returned, the pair found their groove in supercharged action that left them third and fourth respectively on the leaderboard.

But reigning International Kiteboarding Association (IKA) Formula Kite World Champion Daniela Moroz, who is aiming to lift a fifth successive title, once again showed her dominance to take three bullets and the overall lead, despite a wobbly start in her opening race.

A total of 138 athletes—89 men and 49 women from 34 countries and six continents—are battling for the men’s and women’s world championship titles. The contests are highly-anticipated after a year’s break because of the pandemic.

But the opening of the five-day regatta to crown the 2021 Formula Kite world champions began slowly. With the breeze filling late in the day, the race committee decided to send the women’s fleets out first.

After the first race on the trapezoid track in about 11kts of north-westerly breeze, the second race had to be abandoned when the wind shut-off, leaving some of the racers swimming with their kites in the water.

Yet, after a rain shower, the wind returned with an almost a 180-degree shift. With a steady 10kts breeze blowing over the gulf’s flat waters, the women’s fleets were able to complete another five races. The men had been released for the day as there would not have been sufficient daylight to get any further races away.

Racing in the first fleet on the water, Moroz, riding her 21m kite, had a stuttering beginning to her campaign. She had a poor start and found herself in an uncharacteristic third position before she finally overhauled Poland’s Arcisz.

“It was a really tough race,” said Arcisz, 17. “But for half the race I was in front of Daniela Moroz. In the end I was on a 15m kite and she was on 21m. The wind was patchy and shifty and I knew she would catch up with me and pass.”

Moroz did not make the same mistake twice and led around the track, stretching her lead in her day’s closing races with only Poland’s Damasiewicz following closely.

In the alternate fleet, Britain’s Dabson found herself up against the strong French duo of Poema Newland and Lauriane Nolot. But the French pair dropped points despite each scoring bullets, leaving the more consistent Dabson ahead.

“It was about not making mistakes and staying in clear wind where possible,” said Dabson. “I had a bit of moment in one race where someone got their kite inside mine, but I survived. All things considered it was a good day. A good start.”

With the burgeoning field of riders has come greater diversity among the competitors. But one of the more striking facets in the fleet of 49 women is the number of young mothers who somehow combine the pressures of family life with competing at the highest level.

New Zealand’s Justina Kitchen, 32, is a mother-of-two and serves as a role model for some. A windsurfing Olympian, she gave up competition after her daughters now aged four and six were born. But the lure of another Olympics in the Formula Kite class brought her back to competition and she now trains after dropping the children off at school.

Germany’s Leonie Meyer, 28, took her inspiration from Kitchen after spending two months in Auckland with her and seeing that it was possible to manage a small family and compete at the top level.

For Meyer, who just completed her medical studies and gave birth five months ago to a son, the run up to the Worlds has proved challenging. She has only managed six days of training in this year, but now feels free to devote as much time as family life allows to her Olympic campaign.

Meyer, 28, still nursing her son at the championships, already knows what it requires. A member of German team since January, she is a veteran of an Olympic campaign in the 49er class from 2012 to 2016. For Meyer the decision to give Formula Kite two Olympic medals at the Paris 2024 Games after the mixed team relay was set aside, has relieved some pressure.

“I know that I’ll have to spend some time in hospital in coming years for some surgeries for my son, so for me it’s really good that it’s not a team sport any more, though I liked the format,” said Meyer. “I don’t want to be sitting in hospital with him, while my team-mates Jannis Maus and Florian Gruber would be waiting for me to train.”

With her studies and the birth behind her, Meyer plans to take the next six months off to devote herself to training for her Olympic campaign with the help of her boyfriend sharing the family duties.

“For the Worlds I don’t have big expectations,” said Meyer. “I’ll be happy if I don’t crash all over the course. But after this I’ll be doing as many training camps and competitions as I can. It’ll make things harder with time management, but also easier because I’ll not be fixated 100 percent on racing.”

The US’s Kirstyn O’Brien, 34, is no stranger to the competing demands of family life and racing. A veteran kitefoil racer, the mother of a girl and boy, she has raced on the circuit for several years and is on the cusp of breaking into the US team.

O’Brien lives in the Dominican Republic with her pilot husband and has the luxury of training in the afternoons with her children after they have finished school. Her son, aged 10, has taken his first steps on a kitefoil, while her daughter, just nine, is devoted to strapless freestyle.

“The main thing for me, is keeping it all in balance, so that my spending time away travelling for competitions is not to their detriment. When I’m away, my husband is with the kids. But it’s not just about the events. When I’m home it’s about making sure that they get to the kiting level they need to reach.”

Thailand’s Tatsanee “Nam” Phisil, 30, is even luckier. Her 10-year-old son lives with her parents in Phuket, allowing her the freedom to travel to national training camps, or in this case the Worlds, which is her first international competition.

“It’s perfect for me and perfect for my son,” said Nam, who has been kitefoil racing for only 18 months. “He’s with my mum and dad and can go to school, otherwise it would be confusing for him.”

Chile’s Ranny Grimdottir is another kitefoil racing novice drawn by the Olympic dream. A veteran twin-tip and snowkite racer, she had been Chilean champion in both many times. Her daughter, aged 10, and son, aged eight, always go with the family when they go kiting, and have continued to do so since she transferred her passion to kitefoil racing four months ago.

Grimdottir, a dentist who’s a pandemic refugee living in Iceland right now, plans to return to Chile and hopes to win some funding for an Olympic kitefoil campaign from the sailing federation after the Pan-American Championships in Santiago in 2023.

“When we’re home in Chile, the kids always come with us and just love the kiting world,” said Grimdottir. “When my daughter was seven I thought she’d ask for a doll for her birthday, but she asked for kite lessons instead. For me, I just love racing, so kitefoil racing was a natural way to go.”

Hungary’s Virag Szenasi, 35, with two boys aged and two and four, and a girl of seven, has a different struggle on her hands. With her young children accompanying her at the Worlds, she is fortunate they can all travel together. They join her when she is training on Lake Balaton, where the family has a holiday home.

But the veteran freestyle kiteboarder, who converted to kitefoil racing just six months ago, has found the challenge is finding funding to buy equipment and travel to competitions. Already the Hungarian sailing federation has told her funding would only come if she breaks into the top 30 percent in the world, a distant dream right now.

Still Szenasi, who works part-time as a lawyer allowing herself time to train, is enjoying the ride even though the Worlds is only her second international competition after a baptism of fire at the KiteFoil World Series in Cagliari last week.

“I managed in Cagliari,” she said. “I wasn’t last. I’m not sure what my goals are. This is my first world championships. But, of course, everybody wants to go to the Olympics.”

All the action on the climactic final two days of regatta on Saturday and Sunday will be featured on Facebook Livestream.

Re: Opening skirmishes at Formula Kite Worlds in Italy throw up surprises in tight racing