Adding weight to the fuselage for sinking foil

The float in the water has some angle to it due to the mounting position. I think that’s what works for me.


But you must have a super narrow stance?

I stand quite some behind the mast, for better waveriding pressure when carving and in cutbacks.

I use a small stab for much more liveliness, which means you stand even further back now.

See here, even in a narrow stance, quite some distance behind the mast - and when riding waves, I stand further wide stance: 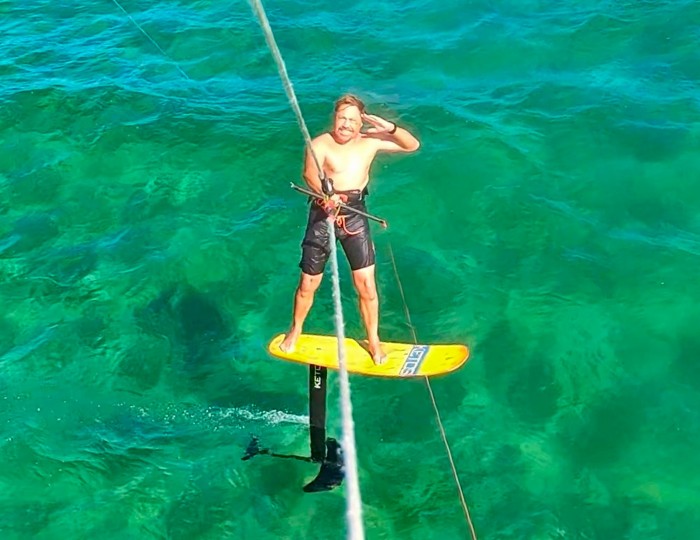 On my normal smaller board than above, the stance is the same, this was just a picture I had where easy to see.

But I know some stand almost on top of the mast?
I only do that when riding with super narrow stance, cruising, but not for normal riding.

My point is only, that it is not a solution for everyone, to change board like that, as we ride so different.

Still interesting about the change - does it stay on its side when you move it further forward, but not when it is rear?

Yes - standard XPS foam. Held up extremely well now for one season with only minimal dents where place my back foot. Love it as it’s soft and non slip and if it ever turns bad I just swap it. A true soft top which makes impacts very easy.

I came from a larger Slingy board and realized I never use much room in the back. The stance is not too narrow. You just use the full length of the board. I also only have one mounting position - so no room to try something different. But I also don’t move my foot back too much like over the edge. Not sure what rear wing I have - came with the wing - 488??! probably?
Top

On my small board I stand at the tail of the board, but something like on the picture in terms of distance from the mast.

I see many using huge stabs, which I dont understand, nor like...

I think the rear stabilizer that usually comes with the Moses 633 front wing is the Moses 483, but I don't have my rig close enough to be sure. And, yes, it is the span in mm.

I've met a couple guys who cut a fair amount off of each end (around 40- 50mm?) and claim it is much better that way, but I haven't tried yet myself, or gotten the chance to try their set-up.

And I guess it is Sabfoil now, but that a company could just all of a sudden decide to change a brand name that is well known and has a good reputation, pretty much defies all comprehension and any common sense.
Top
Post Reply
24 posts

Users browsing this forum: No registered users and 17 guests