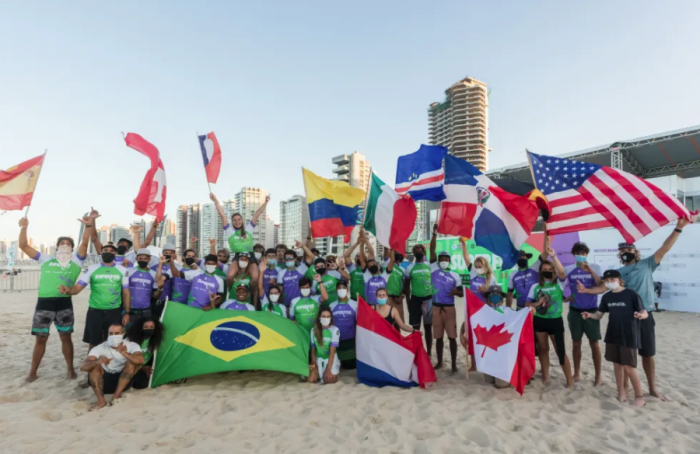 Hydrofoil freestyle is still a relatively new discipline that is evolving rapidly and allows riders to kite at unique locations where the wind is much lighter.

There are 12 men and 4 women of 9 different nationalities registered to participate at this event this week, where the forecast is looking very positive for each day of competition. Last year it was Fred Hope from the USA who topped the podium and won the GKA Hydrofoil Freestyle Championship title, and this year he will again have to face accomplished athletes such as Charles Brodel and Maxime Desjardins who will each be looking for a podium finish here at this event. The men will be competing here for the GKA Hydrofoil Freestyle World Championship title.

“I started kiting at age 13. I rode a twin-tip, then switched to a surfboard, and then finally started hydrofoiling in 2015,” said Fred Hope. “I started doing jumps, riding with straps, and then started riding strapless in 2017, and I never really went back. I love just trying to figure it out, as it’s such a new discipline. I live in Hood River and then travel to Baja in the winters. They are both really great spots.”

“I started kiting when I was 13 years old, and then started foiling just a few years ago,” said Maxime Desjardins. “I started because my father and sister started. Then my sister’s boyfriend, Charles Brodel, started doing Hydrofoil Freestyle which I thought looked really spectacular. I decided to try it and loved it. This is my first competition, and I want to show the world what I can do on the water. I think that this discipline is going to get bigger and bigger, as we can do so much in really light wind.”

On the women’s side there is Samuela Mule from Italy, Aurore Gineste from France, German rider Maike Elisa and Kylie Zarmati from the USA who will all go face to face to battle the podium positions. The women were released from the competition today, and they will commence during tomorrow’s competition. As there are only 4 women registered to compete at this event, they will not be able to compete for a World Championship title, as that requires a minimum of 6 participants.

“I started hydrofoiling about 1.5 years ago,” explained Maike Elisa. “I was living in Cabarete, and the wind was often quite light. This allowed me to ride with a lot less wind, and really have fun with it. I started and after a while, I really fell in love with this discipline. I was inspired to start with freestyle as there were so many good riders in Cabarete, such as Joselito del Rosario, who is also here competing. To see what is possible on a hydrofoil is amazing, because anything that you can do on a twin-tip or a surfboard, you can do on a hydrofoil as well.”

“I started kiteboarding about 15 years ago, but I started hydrofoiling about 5 years ago, just because it looked like a really fun new thing to try,” said Kylie Zarmati. “I got into freestyle because I want to inspire more women to get into it. I ride strapless and it’s so fun. This is my first competition. Hydrofoiling is great as it gives you the opportunity to ride in much lighter wind.”

Rounds 1 and 2 for the men were completed for this first day of competition. The action commenced at 2.30 pm local time, with wind speeds of 12 to 18 knots. The riders were given 9-minute heats, with 15 trick attempts, and the 4 top scores counting. The judges were looking for height, execution, commitment, and innovation.

“So we are mixing two different styles since we have strapless and strapped riders battling in the same heats,” explained Head Judge Mallory de la Villemarque. “We’re looking at the technicality of the moves riders do, the speed they have in and out of the moves, the height they get (especially for strapped riders), and landings are quite important as well. When riders manage to land moves with their board not touching the water they get rewarded especially when the trick is technical.”

ROUND ONE AND TWO

For Round 1, the winning athletes advanced directly to Round 3. The remaining riders got a second chance in Round 2. Locking down their positions directly to Round 3 were Joselito del Rosario, Charles Brodel and Oliver Pasche and Fred Hope. The most spectacular performance of the day went to Charles Brodel in Heat 2, where he achieved an overall score of 24.07 points, including 8 points for his Double Front Board-Off. Fred Hope from the USA also showed some innovative tricks, including his Lazyboy, a front roll landing seated on his board, which scored him 7.43 points.

The eliminations started during Round 2, where riders had to win their heats in order to advance. This is where the riders started to feel the pressure to perform if they wanted to remain in the competition. It was Robin Steward, Reed Brady, Cesar Natoly, and Maxime Desjardins who managed to advance over their competitors. All four riders will now prepare to continue the battle in Round 3 tomorrow.

Would like to know weight of the riders, volume of the boards, wing surface and brand