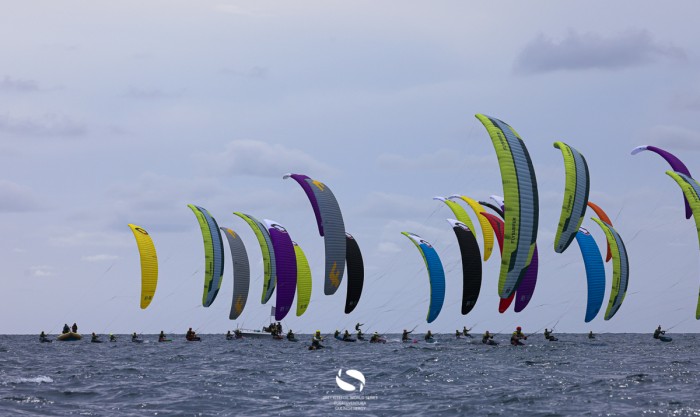 Fifteen years old but strong as on old ox, Singapore’s Max Maeder was fast out of the blocks at the 2021 KiteFoil World Series Fuerteventura. Three back-to-back bullets in the pre-lunch session of double-lap races launched Maeder into an early and decisive lead.

In the post-lunch session Maeder couldn’t match the same level of dominance and slipped back as the afternoon wore on, although he still holds a 1 point lead over Great Britain’s Connor Bainbridge who was master of the sundown session with scores of 1,3,2. Perhaps more importantly for the overall event, the big Briton is currently discarding his opening race score of 5th and is faring best on total aggregate points while Maeder is discarding a 19th.

On equal points but in third overall is France’s Axel Mazella, considered by many as the favourite for the title in Fuerteventura. Despite finishing second in the opening race, Mazella was one of many to rush ashore between races to change up his 15 sq metre kite to a bigger size. Most of the fleet settled down to a 19 or 20 metre size once they’d worked out that the wind wasn’t actually as powerful as it had appeared from the shore.

Part of Maeder’s advantage came from having selected a powerful 23 square metre Flysurfer from the outset, and maybe that extra horse power was what gave him the legs over the opposition. The Singaporean teenager was leading comfortably around the final leeward gate mark but failed to spot the finish line. “What kind of idiot doesn’t see the finish line?” Max was made with himself, bashing his helmet with his fist despite having won the race. It’s that kind of perfectionism that marks out Maeder as a future World Champion. After all, he already won the European title earlier this season.

Even the self-critical Maeder had to admit he’d had a good day. “Six races works out to nearly two hours of full-on leg work,” he said. “It’s pretty tiring by the end of the day but I’m super happy to have come out of the day in the lead.”

Bainbridge was also feeling the heat through his under-practised legs. “Quite a few of us took some time off after the Worlds and it’s amazing how quickly you lose the leg strength and the fitness. I think today was a measure of who’s been putting the time in. That was just perfect racing conditions today though, absolutely full on.”

Sitting in fourth overall, despite chipping his front tooth on the carbon fibre bar that controls his kite, is another teenager Riccardo Pianosi. At 16 years old, he’s a year older than Maeder although has only been kitefoil racing for 18 months or so. Built like a Greek god, the Italian is likely to be a strong contender for the upcoming World Youth Sailing Championships in Oman in early December, with Maeder expected to be his closest rival. If these teenagers are capable of taking on the best of the senior ranks, the youth title seems well within their grasp.

Going to Oman as the kiteboarding coach and mentor is the ‘old man’ of the fleet, 27-year-old Florian Gruber who came away from the day in seventh overall despite an ankle crunching collision when another board got in his way. With his foil severely damaged and his ankle causing pain, Gruber was awarded the consolation of average points. More importantly he’ll be hoping his ankle is good enough to hold up for the rest of the regatta.

In the women’s division, Poema Newland leads the way for France ahead of Great Britain’s Ellie Aldridge and Spain’s Gisela Pulido.

The forecast looks good for more good breeze going into day 3 of the competition, when injured reigning World Champion Theo de Ramecourt will be part of the live commentary team. Tune in for the start of the Facebook Livestream at 1200 hours local time.

Re: Three Bullets fire Max Maeder into an Early Lead