foilholio wrote:
Changes now from stock I have are 3:1 mixer, no C bridles, move and shortened 2 tip B bridles to C (yes technically some of C then still exists lol), shorten Z...

So implementation. I reinstate a 421 mixer and use the old B pulley to run the A funk...

So the mod is a like the speed1 system, except the A15 C-bridle is removed and the Speed1 C connections move to the A15 B connections? 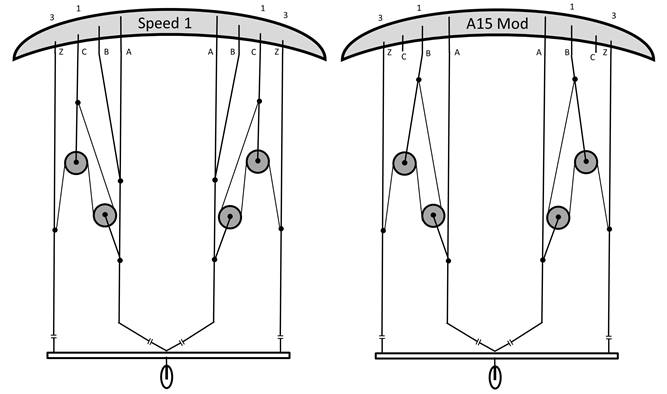 ...which makes me wonder if a simpler 2:1 might work, be easier to tune and reduce bar depower throw 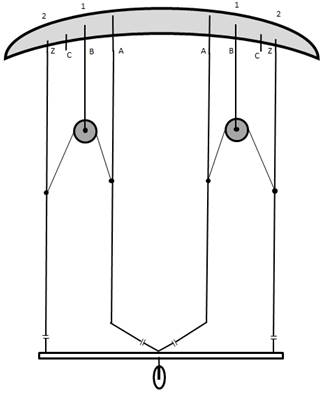 These users thanked the author PugetSoundKiter for the post:
jakemoore (Sat Mar 16, 2019 6:01 pm)

Yes you got the first picture right. Except minor detail I connect the pulley to the pulley top/hole and not the top of the B main.

Also don't forget my moving 2 tip bridles from B to C and shortening. This is very important.

Second picture, if you read back is basically what Kiterfromgermany tried ( he still used C though). He gave up on it for I think the reasons I postulated. That is it won't increase camber so will be less stable depowered. Sorry yes I said mixer that increases camber is more stable. That is because they can have a reducing camber phase. It both reduces and increases camber, very confusing sorry.

Yes. But also could be said I tested it and it works L-)
Top

Quite liking my mod more the more I use it.

I think maybe there is a bit more of a tendency for the tips to collapse when first inflating. I know when I first did the mod the tips could collapse and then would not open. I moved the tip bridles, as there existing placement was obviously wrong, adjusted their lengths and all was good. The kite has no issue once inflated, but I think I will play with the tip area a little more.
Top

I haven't been using the kite a lot but enough to notice some things. When you lose C, Z becomes very critical. If you imagine without Z engaged then normally C would then hold, without C then it is onto B. This gives a pronounced effect that if Z is slack you lose more power than you would have with still having C, simply because less of the airfoil is being pulled into the airflow. C Also helps quite a bit to hold the airfoil shape for a better L/D, if it is tuned for that.

I have started adjusting the kite again, modding it further. I have two problems, kite collapses on a side if flying on A lower in the window and then I would also like to improve the L/D. The collapsing may not be entirely or at all a C removal thing. I have had many foils that do this and can live quite easily by just holding the bar in a bit. I think fixing some AoA at the tip by attaching the B to A might lessen or fix it. My thinking is that the tip seems to initiate the collapse so prevent it and so prevent the rest collapsing. I could arc A more, but don't really want to lessen the PA and with it performance.

I have so far added extensions to Z longest at the tip at about 6 inches going in 5 bridles reducing about an inch each. I then shortened Z about 2 inchs and removed a shortening loop from each or the 2 C attachments leaving only 1 attachment at the very tip shortened. This has gained a significant L/D improvement, the kite flys very much further forward. I haven't seen a degradation in the ability to open the kite. Relieving Z at the tip I guess allows more tension on C, hence I could then make them longer.

Reasoning for lengthening Z at the tip is I could see it getting much too pulled. Effect would stall the tips and also cause them to potentially collapse. I think I will lengthen them further and adjust the graduations a bit. It is hard to see from flyer perspective the exact lengths to smoothen things out. I can see now that bridles pulling the canopy to align with the sewn shape, gives the smoothest shape and should in theory give the best L/D "if" the sewn shape is designed like that.

I think the concept of 3 bridle row kites is quite promising. The placement of the A15 bridles attachments is not quite right for it but still seems to work quite well. Ultimately I may alter a few of these as well.
Top

Collapsing on A seems to only be in very light wind, side slack which all foils do and bad turbulence.
Top

I have connected B at the tip to A, which was previously unconnected. I adjusted to a variety of lengths quite different, the effect on the tip shape was quite dramatic. I am so far with it about an inch longer than the very tip A bridle, the connection or cascade point for both being the same. It holds a bit of tension as you can see it pull on the fabric, but no where near as much as where I started at about 9 inches shorter

. It would seem this is a necessary bridle point to have as it unlocks some more performance. I will need to test it more to see it's full effects but I recommend using it so far. It would seem without it the tip shape is no quite correct and as such poor L/D would be produced there.

I further lengthened the 2 nearest tip Z bridles. I think they are close to about right to give even AOA across the span at overall higher AOA. This would be a good mod I think for any other foils where you can see tip AOA greater than the rest of the wing and would like to increase L/D at the cost of turning. Maybe for racing and jumping.

Overall I think I will need to fine tune all these lengths further, but I am amazed at the tolerance to adjustment so far. In that it would seem you can change them quite a bit and not end up with an unusable kite.

To explain things a little, Increased AoA at the tip is easily seen as the rear tip pulling down more than the rest of the wing. It is a result of reduced cord or width of the tip with similar bridle placements resulting in the same bar movement therefore producing a bigger effect there. It can be altered by changing the cord, i.e. a rectangular kite, changing the bridle attachments, as seen on later models foils, or using different ratio mixer for different parts of the wing, like on the Flysurfer Race, or as I am doing by changing bridle lengths ( and attachments).
Last edited by foilholio on Tue Mar 19, 2019 12:14 am, edited 1 time in total.
Top

New adjustments seem to have improved, power, upwind and stability. Turning is a little worse. Overall very good so far.

I had a look at the FS Race line plan. Appears I was not exactly right with what they are doing with the mixer but it is interesting none the less. They are pulling A in on the tips, and B more on the tips. A being pulled will lessen the B pull but it is still more, but it also reduces the Z pull. Quite interesting, but the really interesting bit is no Z or B attachment at the tip and the other placements. I think I will try disconnect C and Z on the A15 and some other kites. I think it should give a winglet like affect and further improve L/D. The increase in how far my A15 flys forward now is actually a bit crazy.
Last edited by foilholio on Tue Mar 19, 2019 12:15 am, edited 1 time in total.
Top

Disconnecting Z at the tip deserves it's own thread.

I have 4 of the tip B on C and am quite happy with it like that. Tip control is better particularly in light wind. Might be a slight restriction on depower, but hard to tell. Can always increase depower on the mixer. Only way to stop the tip collapse depowered in lightwind would be to alter the shape or limit the depower. I think I will just live for now with using the bar. I think watching the Soul do the same, leaves me wondering if eliminating it would infer too much negative.

I have not settled on disconnecting Z, it is not straight forward to what is best. Look at my post in that thread. Currently I think many would be happy with the changes so far I have made to the A15. If anyone wants some measurements just ask.
Top
Post Reply
512 posts