by foilholio
Conceptair understands shape change, so I wouldn't expect you to understand their bridles. Pansh bridles are fine. It's kind of stupid to focus on bridle drag, when you ignore the "red" elephant in the room. If those bridles were rendered to the nearest pixel they wouldn't be visible. Which basically sums up your demeanor "fretting over something that's not visible".

by Kiter_from_Germany
oh, nice one, I like the flat sickle shape, never knew why the elder designs where so arced...
and straight foreward bridles... nice.

Hope not to be so tired tomorrow, plan would be to flatten the profile and improve agility at mine... coincidence... working on getting rid of the resleaving task and try tip control improvements, flattening is one...

Longer tweaking LCLs already prepared, but this eve is soccer, germany may be struggeling against sweden...

by Kiter_from_Germany
In Reus and Kroos we trust!

by foilholio
Tested the 3:1 mixer plus more changes. The short, very good, bar pressure moderate and quite nice , turn very good, bar feel good, sheeting range much more compact. I am now convinced C bridles are definitely not needed on the A15.

The long, didn't start off so good, I used the B limit as my reference point and it would seem the A15 has excess of B slack, so I had to adjust my line trim a lot. With a WAC line the bar pressure is very high, borderline too high. WAC would not have a usable bar pressure with backweighted 4:3:2 mixer. I used one of the existing pulley lines, they are about 2m long giving a 4 meter range, with 3:1 mixer that reduces the range to 3.5m. With using the exist B limit the range with WAC is not enough to get great reversing for relaunch. Because of that relaunch is better without the WAC, if I used a longer pulley line then WAC would be better I guess. WAC with a 3:1 mixer requires more bar sheet to effect the same change as standard 4:2:1 mixer, as result using WAC combined with 3:1 mixer didn't result in much increase in sheet range if any at all and may have gone backwards. Then came the interesting effect of removing the WAC, sheet range and turn improved a lot. In fact the turn is much better than previous standard mixer with WAC, which was already very good. Turning is much more like a smaller kite now, maybe even some slow 10m foils. It is quite easy to pivot turn with the bar. The bar pressure is a lot less than using WAC with standard mixer. Relaunch I would say is improved over original setup, but not as good as WAC on standard mixer. Overall it is looking better and better. I had some tip instability as I noticed before when dropping C bridle. In fact the tips would collapse and I had difficulty getting them to open. I moved the tip B bridle to the C attachment, then used one loop and then two loops around the LCL to shorten it. That largely fixed the tip issues, especially not opening up. There is some residual tip instability, I am going to move the next row B to C, I may even progress C to Z at the tip. I may need to alter the sewn camber at the tips as the instability is present flying on A. I could try out some flysurfer PMAs, to make it tunable especially with age. I tried playing with camber (Z), and settled on my old setting, which is reduced a bit now WAC is gone and 3:1 is more linear. I may increase it when I get the tips under more control. Reduced camber seemed to notice the lack of a C bridle even less! Overall I am very happy, would be much easier for people to tune a 3 bridle row kite like this.

by Kiter_from_Germany
happy to hear that. May be an easier way than mine.
Take yr time to make it stable, we compare vids then...

Was at river rhine today.
Tweaked one half of kite so and so:

non resleaved (B78 stays B78): unfortunately b bridle goes from 50% down to 30% at the tips. Not nice for backweighted mixer...but tweak was possible for me. Stability was ok, but agility was not better as the resleaved side, but more unstable
Result: Will contintue the resleeved Tweak.

Hopefully I get everything together, kite seens good for jump.
Next weeks I promise vids in case of reasonable repetitive success...

by foilholio
Yes the change forward in the attachments on the cord at the tips is a problem. To optimize for efficiency you would think they would move back and even dump Z. I think the existing idea is to try get the tips higher camber so they brake better on the inside for turn, but higher camber brakes worse than lower... And the high camber makes them unstable.

Just to clarify some of the language you use, a bit lost in translation for me, "resleaved" do you mean move? as in you moved B bridles at the tip onto the A bridle. That sounds like a good Idea I might try it.

by Kiter_from_Germany
Hello together,
here are the updated values:

I colored for the purpose of assignment:

green: the Z bridle tweak:
I cant imagine why I didn't got my tweaks a year ago werent successful. I always had kite collapses at my first tries with regular mixer setup. This tweak should work at all standard setups alone
The values make a muuuuuch better Z engagement flying at my pansh A15 in 18m. I calculated all my values based on standard mixer setting of my pansh (valued this way in delivery). Divide these values by the wingspan values to get other starting points:
For example: Z tweak of z5678 at a 9m A15:

yellow:
Adjustments I did because it make a slight better look. This tweaks are not neccessary for stability. I did them by adding new LCLs (these little line extensions at the kite)
So forget them while starting tests

Just to clarify some of the language you use, a bit lost in translation for me, "resleaved" do you mean move? as in you moved B bridles at the tip onto the A bridle. That sounds like a good Idea I might try it.

uups, Thanks for the hint!

Resleaving is a typo I ment resleeving from sleeve, which ment to put one line out of its bridle position to another one.

Here is the new line plan: 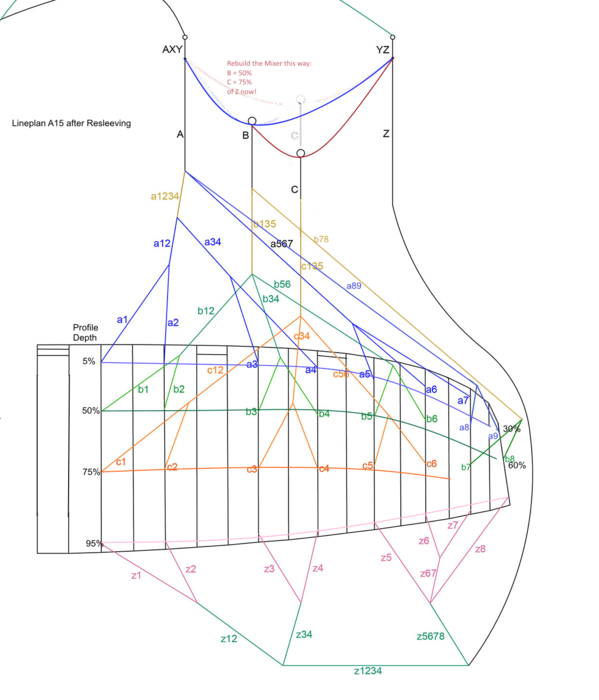 The reason for that is shown at the tension line graphs:
Unfortunately the original lineplan is good for topology, but not good for the real position. I noted them with the "Profile Depth" parameter (values in black).
The idea is, that the tension lines are always backward aligned in reference to direction of flight, to prevent unwanted negative gear effects from backweighted mixer, specially in the wing tips area (note: B connection points there are NOT at 50% position as they are in center of wing, they are at 30% at the tips....)

by foilholio
I think I will implement your bridle rearrangement at the tips. Flattening Z like that should improve stability, I would think only altering z1234 for -11 then Z main for the remaining -17 would be better. Your Z5 change seems weird but I gather it's to do with the change to c56 and A? and again why not alter A main instead of a1234 and A567?

foilholio wrote: ↑
Mon Jun 25, 2018 3:12 pm
I think I will implement your bridle rearrangement at the tips. Flattening Z like that should improve stability, I would think only altering z1234 for -11 then Z main for the remaining -17 would be better. Your Z5 change seems weird but I gather it's to do with the change to c56 and A? and again why not alter A main instead of a1234 and A567?

Idea not to change Z is to keep mixer test at its original values... they would change if I understood you right...
All times are UTC+01:00
Page 45 of 51
Powered by phpBB® Forum Software © phpBB Limited
https://www.phpbb.com/