the "Malabar" mixer test for large foilkites in light wind

by foilholio
I tried fixed BC, B becomes slack with C still tensioned when depowering. Turning seems slower and less responsive than BC on a pulley. Even powered the pulley will distribute tension more even than fixed.

I have another idea.

Should increase C movement powered and reduce B? Technically B should hold half the tension of C, the actual lengths will be interesting.

I could obviously add more pulleys to the C section and increase the tension on it further. I wonder if this could create a similar effect to a 631 or higher mixer, but with a short throw.

by kitexpert
Interesting thread, thanks for Regis, foilholio and Kiter_from_Germany. Like KfG wrote, modern kites are designed for 1:1/2:1/4 speedsystem, only in biggest sizes more efficient systems may be needed or are possible.

Regis's Malabar is reasonable invention. Too bad if it does not relaunch. It could have been too efficient anyway.

KfG's "conventional B" looks good too and has original idea. It may be too efficient, but adding a pulley to get 1:3 instead of 1:2 to B-C, would help. Then pulling ratios would be: 4/3:2/3:1/3, for Z:C:B, if I calculated correctly (modified to normal system with fixed A).

Number10 is foilholios idea in which B-C adjust automatically. I don't know if it is a good idea, because change of camber is not controlled like it normally is. If I see it correctly, added orange pulleyline should be doubled on B side, not C? But I'm not sure of that...

by foilholio
Looks good? which one? conventional_B? That will just lock ABC together and the kite probably wont even fly. It'll be permanently in a stall.

Number 10, yes you could think that the extra pulley needs to be on B. You need to think about it a bit. It's B and C that move each other. B has more leverage on C with the extra pulley.

Number 9 worked quite well. The reduction in weight on this style of mixer should be enough for maybe 6 extra pulleys. The two main pulleys could be replaced with one ring.If it turns out a tripling or quadrupling of force on C is best, even lightweight multi sheaved pulleys could be designed and used. I wish someone would improve upon the current plastic pulleys, they seem to have a bit of waste in them. 3 grams should be achievable. They are designed for 4mm ropes and we use 2mm.

by foilholio
Very limited test of 10. Works as it should. The effect seems greater than 421 maybe more 841. I don't think more pulleys will be needed. The reduced tension on b is really quite noticeable. Seems to highlight flaws in existing bridle design with some parts becoming very slack. Otherwise the profile looks good with this mixer. Will need to test more with it.

One thing I have to do is install a line to restrain B depowered. The kite I am using needs AB to depower with enough stability. I see the potential to actually restrain B and C depowered with this style of mixer,on such kites, and not need a line to do it. There may be a possible reduction in C pulley line available as such. Only reason stopping it would be being able to still relaunch.

by foilholio
I tested 9 and 10 more trying to see if I could get them to hold BC depowered in such a way as the kite would be stable. Unfortunately it seems impossible. It seems with some tension alone on AB foils can depower but hold good stability, but as soon as C is introduced it all goes out the window. I think for kites that depower solely on A this could still work. I still need to test a line restraining B depowered.

by Regis-de-giens
Following the interesting "tech talk" on genesis mod, I would like to update this post with on idea to improve the relaunch of the Malabar (not tested but theoretically working).

For memory, here is the malabar : 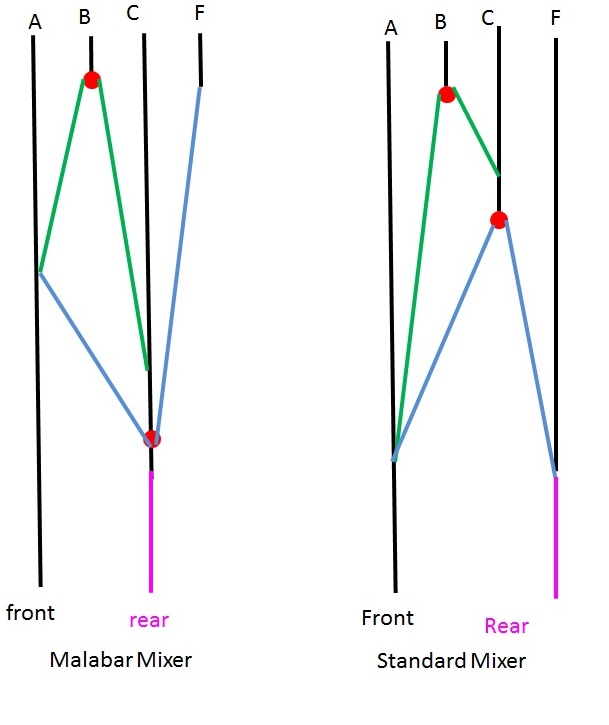 I suggest to add one line between the rear line connection and the Z (noted F here). This should help the relaunch if not solving it...

To keep a full malabar effect (i.e. turbo bar effect but on a standard bar plus agility / reactivity / depower improvement) you need to adjust this line length to "just tensioned when kite fully depowered"

by Regis-de-giens
Ps : or even easier, you can add a stopper (eight knot or ball or pearl or small ring whatever) on the Z pulley line (blue), between the pulley and its connection to A to limit the line stroke. To be located in contact of the pulley (red) when fully depowered or just a bit further to keep possibility to pull the front line of the bar in big lulls.

by foilholio
Regis restricting Z depowering with a line or stopper is not going to help relaunch at all. You need the tension more on Z when powering not depower for relaunch.

Actually thinking about this more the Malabar as standard might relaunch on the A15 given the more rearward C position. I have been thinking for a theory for why Jackos mixer, Malabar or Diablo Line have an effect to change relaunch. Simply put it has to do with tow point position. The tow point needs to move rearward enough to affect relaunch or reverse flight. I can't say exactly where but past 50% is obvious, I would guess somewhere in 70-90%. Given the A15's C position is already in that area, direct control authority on C should likely be enough to relaunch. I wonder if as well Z being too tight could cause it to fail, reason being tension then becomes sole between A and Z. The likely scenario is tension always ends up back on A thru Z, if you have Z slack enough not to affect that then it is not tight enough for normal flight.

One line relaunch could be an option for the malabar, but I doubt it. I am sure most LEIs who master it still retain direct TE control.

by Regis-de-giens
To me the reason for supposed better telaunch of jackos is that the Z line goes backward to the B while Malabar goes to the A. When its goes to A like Malabar, since a reverse relaunch will impose a swap of dominant tension from A (normally a bout 80 %) to Z (normally about 10-20%) , so tebsuon on Z become 80 % (figure just to illustrate) and will go further from the bar, then pulling on A (lower tension) . So there is an unexpexted shortering of A and ellongation of Z: this means a lower AoA overall => kite does not relaunch in reverse mode and the more you pull on rear lines, the mire the opposite happen (z released and A pulled) => kite will never relaunch.

On jackos mixer, same story, except that Z line goes back to B (and not A). This means that the leading edge (A)in not affexted by rear line pulley, so the AoA (angle of AZ line) us less affected. Of you pursue pulling on rear line , there is one point where you actually pull on Z, and since A is fixed, you actually increase the reversed AoA and can reverse relaunch. Camber becomes a mess, but still allows to relaunch since global AoA can be increased.... (or decreasef if you think tge TE becoming the "new" LE.).


My idea with the adding of a "slack" Z direct line or stopper is not to engage in normal ride, but just when over sheet-in. Therefore when in reverse relaunch you over-sheet-in with prelines in hand , then the Z are really pulled toward the bar. It may not be sufficient since AoA will not change a lot, just blocked, that may be the showstopper. On jackos this idea will work better since A are free and independant of pulling rear lines
All times are UTC+01:00
Page 5 of 5
Powered by phpBB® Forum Software © phpBB Limited
https://www.phpbb.com/