Looks an interesting development for light wind especially on a hydrofoil. It's a single skin with 3 closed cells for water relaunch. 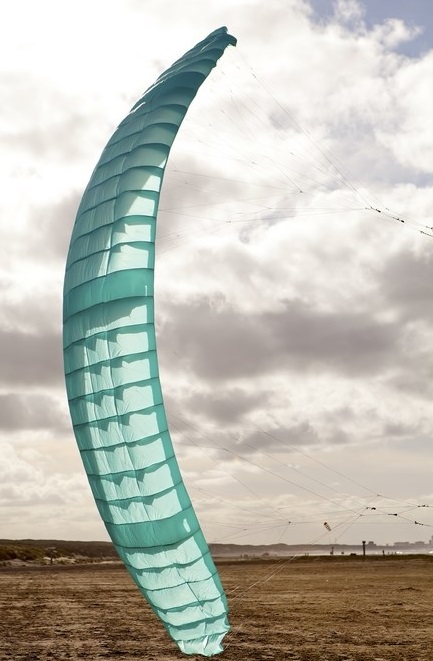 Is the main advantage just the weight?
Top

I love this promising concept. The 9m should be available soon (bit certainly a bit little for hyperlight wind). And maybe a 11m will follow, far better

Weights of the proto was just below 1 kg. Amazing
Top

Yes definitelly with the related limited size when packed...and certainly a rapid preparation and pack-back after session.
Top

Brand Affiliation: None
Has thanked: 2 times
Been thanked: 7 times

I don't really get it why it needs any closed cells. I can already ride my closed cell kites in wind that I can't realaunch them in. Is the closed cell just for you to be able to retrieve it from the water? I can understand going super light and giving up on water relaunching all together with the hopes that the light weight keeps it out of the water.

My biggest problem in the super light wind is when I fall on a tack and the lines go slack causing the kite to collapse. Wouldn't a single skin be even more likely to collapse? Or would the less weight make it more likely to just drift back and reinflate?
Top

All I know this kite is designed primary for land based activities like landboarding.

Nevertheless its light wind potential is the interesting thing. Relaunch in those ultra low winds...never an option.
Due to the significant weight reduction compared with a "twinskin" foil, this one should be more stable in even lower winds, where you have to keep your normal foil moving to not crash it.
Top

I think water relaunch is very possible. Already I can water relaunch my nasa wing. It just needs a some fabric to still be catching the wind. If it is flat then there is no hope. With the Ninox if they use a waterproof coating like the lotus or what pansh uses, then the fabric won't soak any water thus not getting heavier and water relaunch should be possible below 5 knots.

As I said it was never intended to be water relaunch-able. Nevertheless this creates "hope"

For what other reason did he add closed cells? I would guess closed cells on the tips would help single skins more structurally, as there they are the least stable? Mind you it's the center that seems to like to collapse on my nasa wings.
Top

When I have transformed my ex Speed 2 19m to a single skin, wings were collapsing a lot ; internal pressure of standard double skin adds huge rigidity that allows to twist the wings more inward hence increase agility and performance ; single skins like peak need therefore to have really flatter wings with higher Angle of Attack on the wings to keep their shape, which kills the L/D ratio and the up-wind ability.

This hydrid concept could solve part of this single skin problem and reduce maybe the AoA of at the wings thanks to the added rigidity of the lateral closed cell. The designer told me that (according to him) L/D ratio ( performance) was comparable to a Flysurfer Speed. Well...to be confirmed but certainly better than single skin Peak...

Regarding relaunch, I noted that with my 9m peak on snow, there was a significant problem in hyper light wind : if a zero-wind lull comes, when it backstalls up to the ground , the absence of structural rigidity makes the kite completely touch the ground, up to the Leading Edge, with a very limited chance that it will catch properly the next flurry of wind, specially if you are in a little bowl. A closed cell or even open cell kite will keep a minimum of pressure putting the LE higher and better chance to catch the next wind increase. The 3 cells of the Ninox could maybe save this type of relaunch.

Relaunching in the water: still risky (knowing that the LE is not closed on the Ninox), but its low weight will reduce the chance to touch the water. And in case of irregular wind, it would allow both to keep the kite in the air in lulls, but also accept the risk to put it down the (flat ... ) water when wind is above 6 knots .
Top
Post Reply
62 posts