How about the pulsión S12?
I want to have as much wind range as possible on a TT and also on a foil board
I wonder if there is more info on this S version
Top

I tested the 12m light cloth last spring on a hydrofoil in 7-12 knots and then a friend of mine bought it after his pulsion 9m standard cloth. It is very close to the standard one light cloth with only light differences :

- wind range similar or maybe slighly wider . Sweet spot is translated to about 1 knot higher on the S.

- low end is slighltly degraded (Waterstart , zenith ability and edge of window parking are a bit better on std on extreme light wind and recovery loops in lulls in low low end is easier on standard pulsion)

- loop has maybe a bit less delay in the command but needs a bit more line tension to terminate the loop (so be carefull when learning transitions in hydrofoil or in waves).

A good opus as well . My friends has the wave 6.5 as higher wind kite with no "hole" in between wind ranges.
Top

Thank you Regis; I have the wave 8.5 for downwind trips with a planing board but need just a bit more power when the wind is less than ? 13 knots? (I weigh 92kg) Also it is not good on this conditions for upwind. I am looking for a complement for lighter winds (but not extra light) and better upwind.
I really like how small, light, simple my Wave kite is for this trips, I did one today where I practiced loops all the way down. At the end, just landed it by myselfin in the town and took a taxi back to my car, the wind was not hard at all but had a grate time.
Top

I think the Pulsion 12 standard will suit you with a closer feeling to your wave (similar stability and drift but with far more loop power and speed); standard cloth is 40 gr, light is 32gr and ultralight is 27gr (my preferred); 40 gr will full fil your need above 7-8 knots with your weight and be more solid to crashes and time ; 32 or 27 are a bit more expensive, weaker, but IMO more pleasant under 8-9 knots (you can target this with a HF) and easier to sell as second hand (during the first years at least).
Top

Grate help, one more queston if I may:

Thanks for this help
Top

Not tested backtoback in high winds. So only my guess : Better high end , no I do not think so. But foil kites wear more rapidly in high winds so naturally the std cloth will be more durable during the time . And crashes in high winds are more damaging so again std cloth (intercells) will withstand more crashes (this is the main weak point on light cloth pulsions). Std cloth is aslo more durable if the ground during your launch is agressive.
Top 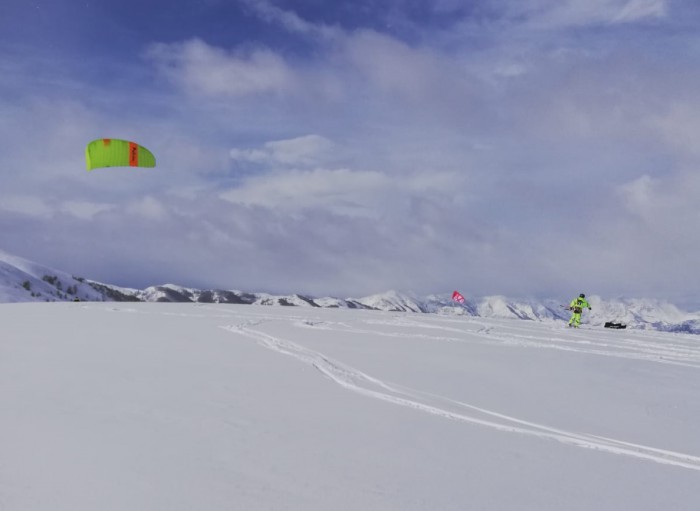 Wind was regularly oscillating from 0 to 6 knots every half an hour ; so it was an interesting comparison test (no propaganda, please trust me);
- Pulsion was the first to fly (or the latest when wind was dropping down), and (as I suspected) even sooner than both single skins; also the earlier to enable a rider move; to me Pulsion has more grunt in loops, but it is hard to ensure here since Pulsion 12m had +3 m2 vs Shaman 9m.
- then Shaman were the second to lift-up in the air, very close to the Pulsion (difference is just noticeable, not really significant); others were locked on the ground
- then I would say Soul + ozones recent open cells + VMG in the same wind, hard to differentiate these three in this mountain wind ; Once up, Ozone was the easiest to work-out in the air (short loop) , then Soul , then VMG (was flying soon but prone to more instabilities and collapse, short lines did not help the good pilot)
- Sonic2 very close to above Flysurfers (hard to say since my friend was also helping a beginner)
- the Ozone Frenzy old generations (cloth was heavier as far as I know) which shown a real differences with more recent Ozones.
- then LEI 3 struts, with far less ability to fly ...

Then the wind blew higher (say 12-15 knots), I kept the Pulsion 12m with my original 25m lines but was not very comfortable in the gusts (but not really motivated to stop and swap with my 9m Pansh) and Shaman 9m seemed better adapted in this higher wind to climb the hills safely and closer to the ridge of the mountains
Top

This must be called pilot incapability, lack of try or BS. Problem is not to get kite in the air but to develop enough power to get going without losing ground. Looping kite constantly and dragging yourself slowly downwind is possible in lightest of winds but it doesn't make much sense.

Efficient foil kite can be pulled in the air in 0kn and flied in circles, then "wind " is the kiter himself. I was able to do this few years ago with my high AR kite even though wingtips weren't at all tuned properly. I got it somehow usable and I reached quite high speed with it but it was a bit too difficult to use and it was also pulling too much too soon. So I got tired of it and moved on...

For LEI's limit to get kite in the air is perhaps 2-4kn. In 6 to 8 knots I have had quite nice snow kite sessions with 17m LEI, but then surface must be of low friction and wind of good quality. Above 8kn almost all kites are usable in hard surface, no matter if it is LEI or small sized - assuming kiter knows how to fly a kite.

If surface is soft need for wind increases dramatically. If it is also light wind there is no other possibility than a big kite, bigger the better.
Top

ok, against your analysis ... again ... and on every single point ; I was able to ride and come back to my starting point before others (skilled) riders without any external energy including my legs (otherwise I leave the kite on the ground ...) ; that would have been impossible with a heavy kite like LEI or some foil kites including my Elf; that is all the actual fact I can report .

You seem to be in a bad moon today ... sorry I will not enter in your polemical provocation here again; please focus.
Top
Post Reply
291 posts