The following is the information regarding the different settings directly from Ben. These are exactly his words: The photo number 1 is regular, the number 2 is a bit more rapid and less on the harness, the 3 you lost a bit in the low end and the kite is more light, 4 is not for all kite but some size could using this, more slowly and more power but backs stall is close, the 5 is very good too depend upon feeling closer than the one powerful, all combination depend upon rider, age of your kite too, question of feeling, thank you very much. Ben.
Top

I found this pic on one of the French forums and saved it. But what are the purposes of the different settings? CA use yellow for the A line on one side, and Red for the B, and the opposite on the other side. In this picture, is it the case that red = A...?

OK so if indeed red=A then you can get the first two settings with a bit of dyneema with one single knot. Otherwise there are way too many knots to get tangled. The loop is around 11cm. Lower one is equal to pic 1, the upper one is like pic 2. 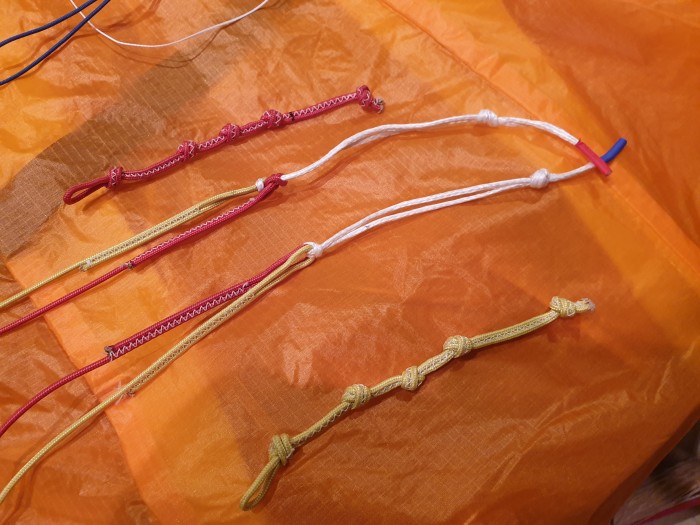 EDIT: looking again I see that my lower pic is like the setting I actually had on my kite, and the upper setting is like picture 1. So you probably need one knot to get the equivalent of pic 2. Anyway you get the point if you want to reduce the number of knots floating around waiting to get tangled.
Top

But goodness how do you land this thing? It won’t back down. I had to hit safety.
Top

I take mine to the side of the wind window just above the water then grab both rear lines to drop it on the water and then I pull in just one of the rear lines to flag it out. Once it is flagged out I then start winding all the lines on the bar working my way up to the kite. This is only when it is really powered up. The rest of the time I just do what I said except I wind both rear lines on to the bar and it just sits on the it's tail until I work my way to the kite.
Top

I've been able to tether my 4.5 wave like you would with a LEI and have it sit on it's wing tip long enough for me to get to it .
Top

But goodness how do you land this thing? It won’t back down. I had to hit safety.

Jake, as you have peak4 experience, can you please make direct compare between these two? Many thanks.
Top

They are similar in that both sit relatively deep and are very balanced in weight, resulting in a very pleasing experience riding downwind in waves. From there, they are opposites.

The Peak has a very fun stunt kite flying style and is for example to backstall it very deep into the window and put it right where you want it. For that reason its also easier to get just a little boost of power on a wave. Its just super intuitive and fun to fly. The downside for me on the peak is if the whitewater gets over 50 cm it can grab the lower rear line and turn the kite into the water especially when body dragging. So its easy to keep the peak flying as long as you are out of the waves. And if there is any real wave the chance of relaunch quickly approaches zero. I have sunk and lost a peak riding in waves because I had to let it go as I was rolling it up drifting into the breaking wave would have broken me or the kite. So I absolutely love flying the Peak but swimming is a reality with any kite is more so with a Peak.

The Wave 3m has a funny ABC and no Z bridle. When it backstalls it hardly goes backwards. Also it has active wingtips like Psycho 4. The result is a faster swooping turn when the kite is depowered, but paradoxically slow turning when the bar is sheeted in. You have to loop the kite to get it far into the wind window. There is zero potential for "stunt kite" style riding as you might see with Clouds, Peaks and Hyperlinks. That said the depower is so much smoother. Like the peak, sheeting out kills it. The difference is no flapping and no drama in extremis. The Wave 3m needs a little more wind. I can make the Peak 3m work in 20, the Wave 3m needs 25 in our conditions with current and waves. While Peak is most fun from the bottom to middle of its wind range it seems the Wave gets better with more wind. The peak loses all power but stays in the wind and nicely under control when riding downwind on a wave but it requires active flight. It looks like the quintessential Wave riding experience is to catch a wave and then forget flying the kite. I did not have this experience yet but I can visualize it with the Wave, where as the Peak is always flying. Its not quite but it is slow to fall. Relaunch is not an issue with the Wave. I tried parking it on its ear like an LEI tethered to my car. It automatically relaunched and flew over the zenith to the other side. Then it flew back to the first side, and then when it took off toward zenith again I hit the safety.

For me the ideal kite is something between Peak and Wave. I don't necessarily think partial single skins like Marabou or Firefly have the answer (never flew firefly) but maybe a Wave with turbo or a Z bridle allowing backstall.
Top

Many thanks for detailed insight. Much apreciated. For me restart isnt problem with peaks at all. I literary never drop my kites. Maybe its conservative riding... Only thing i miss on Peaks are tiny bit smoothness on high end. My low wind kite is FRS closed cell kite so im constantly confronted with this smoothnes. Is very easy to get out of peaks sweetspot. Otherwise peak is dream. It looks like wave have this smoothnes but for the price...
Top

jakemoore wrote: ↑
Sat Feb 22, 2020 5:30 am
Relaunch is not an issue with the Wave. I tried parking it on its ear like an LEI tethered to my car. It automatically relaunched and flew over the zenith to the other side. Then it flew back to the first side, and then when it took off toward zenith again I hit the safety.

This works as long as you do it right. Next time, do NOT just park a tethered Wave. It's not a LEI. Keep your hand on the back line at all times, and walk towards the kite. If the kite tries to relaunch, pull the back line a bit, thus steering it back down. (If it wants to crash into the ground, push.) In case things go bad, pull the back line HARD. That's your flag line now - wear gloves.

Finally got to try out my CA Wave 6.5m yesterday in strong, punchy winds. I weigh 110 kg and ride a strapless surf foil. This kite was collapsing alot during my session and I was wondering if my line attachment setting choice was contributing to this? See pic below. Front line attachment on left, steering line attachment on right. Any advice on how to tune this kite to not collapse? Thx!! 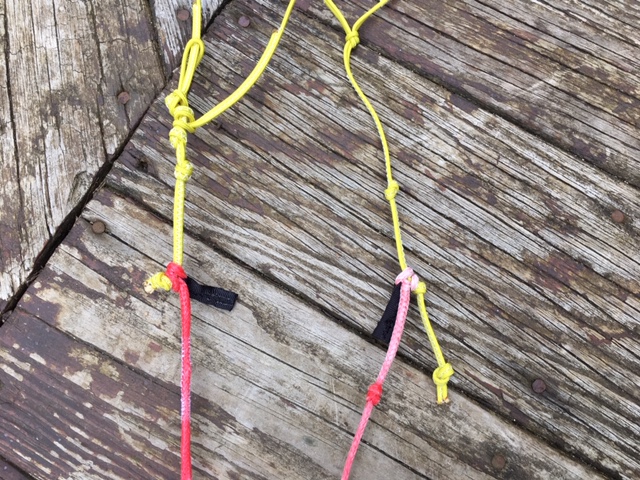