Thanks everyone. Very interesting. Especially when some prefer 15m over 18m and some the opposite. Could you also tell are you conditions gusty or steady wind? Thing is that I'm ok with a larger kite, when a gust comes I simply edge like insane until the gust passes. Actually, gusts here are really visible often as water surface becomes much rougher when wind becomes stronger. So I'm thinking maybe 18m on short lines would be a good option.
Top

I tested Sonic-FR1 15 and 18 neck to neck with 4 friends. And wind was low barely planing with door-tt. 18 did not bring any benefits for twintip freeriding, all four of us independently preferred 15m because of increase agility for dynamic flying and power generation. And we think added span (=lift increase) with added inertia because of increased kite volume on 18 is not worth it. Kite accelerates and turns slower so it is harder to maintain kite flying speed.

I don't cut/paste video URL as it starts to be very repetitive in all LW-foilkite -threads.
Top

This is my fourth season on a hydrofoil and it's about all I ride right now. I weigh about 170 lbs. I have a range of foil kites and a couple of months ago added a Sonic 2, 15 m to my quiver. I had a great session a couple of days ago on this kite during which the wind started really light, but then picked up to be fairly strong. In the beginning starting was easy, but I lost a little power on the downloop gybes so was touching down. As the wind picked up, my gybing improved until I was in a sweet spot. Eventually I had to add in some depower. Toward the end I was mostly depowered, probably 4/5ths. I was really impressed with the range of the kite. Had I shown up at the beach around 2:30 or 3:00 when the wind was around 15, I would have put up my 8 meter foil. No way would I have launched the 15 m. The guy who caught my kite said, "You started out in next to nothing and now it's gusting up to 18, impressive." In the end when I was failing to complete my gybes, I was flying through the air, then skittering across the surface of the water for quite a ways.

I attached the wind data from the day. I was out from 1:16 until 3:52. I think about an 18 sometimes, but what I have now works well enough. It would be fun to go faster on the really light wind days. But on my session 2 days ago, the wind picked up to well beyond what was predicted and the 18 would have been way too much kite. It's nice to realize that an 8 m and a 15 m are enough to cover the conditions. 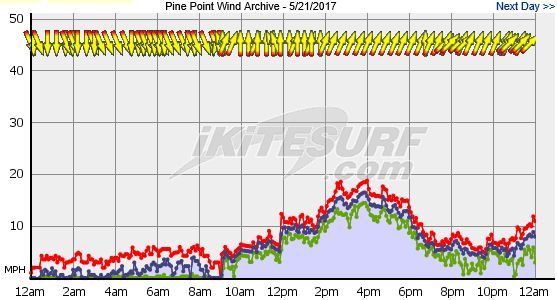